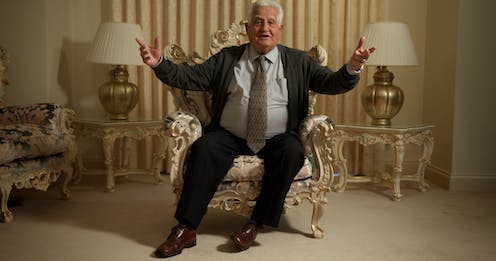 Every Melburnian over 40, and many under, knows (or thinks they know) who Franco Cozzo is. He rose to fame through self-promotion aided by a little bit of associated fascination around a man who sold a product seemingly exclusively to a non-English speaking sector of the community — first-generation Mediterranean migrants — and did it in Italian (and, sort of, Greek).

This was radical at a time when some Anglo-Australians insisted (sometimes virulently) on only English being spoken in their presence. Cozzo’s success speaks for itself: at its height, his empire was three large outlets in inner-city Melbourne and a huge product awareness.

Many Italian-Australians also silently cringed, not at Cozzo’s speaking of Italian on television, but at the promotion of a baroque furnishing mode that seemed to signify a gaudy conception of success.

You didn’t have to be a second-gen Italian-Australian to regard the Cozzo phenomenon with embarrassment: not just because of all the jokes made by Anglo-Australians, but because he was a particular kind of Italian: a Sicillian — read “peasant” — with all the attendant stereotypes.

In 1985, when television still united the nation in water-cooler moments, Cozzo commercials were voted the most hated by readers of The Age. Whatever else this signified, it showed strong product recognition. Were Cozzo launching himself on the world today, he would not be compelled to appear on mass media just to reach his niche market.

In that regard, the pre-internet age did us all a favour, establishing a new awareness that there were other cultures hiding in plain sight amongst what was still an assimilationist environment.

A gem of a documentary

Madeleine Martiniello’s documentary on Cozzo, Palazzo di Cozzo, was first scheduled for the Melbourne International Film Festival. Soon to show on ABC TV, it had its cinema premiere, ironically, in Perth.

There’s a lot more to the man than we could glean from the smooth, showy, handsome 50-something gentleman who addressed us from his 30-second spots with long strings of Italian, Greek and English ending in the famed accented pronunciation of “Norda Melbourne, Brunswick and Footiscray”.

Cozzo tells us, in this minor gem of a documentary, about his overbearing father, his beloved mother and his sister, Vincenzina, who died at the age of 12. The pictures of her atop one of the family horses are touching, as are photographs of youthful, directionless and somewhat resentful Franco and his “very tough daddy” arm-in-arm in an unidentified city street in the early 1950s.

Cozzo and his father in the 1950s. Sharmill Films

Arriving alone in Melbourne on Australia Day, 1956, Cozzo took his horse-trading knowledge and became a Fiat dealer, a reality which gives some context to his hard-sell approach to beds and wardrobes.

He embraced television the following decade, presenting the Italian-language variety show Carosello on Channel 0 and then, briefly, Channel 7.

Cozzo’s delivery of his life story told to the camera drifts between Italian and English without missing a beat, English subtitles covering both. Now in his 80s, a father of ten, he seems unwilling to distinguish between the public and private persona, but is resigned to dealing with the rumours.

Cozzo is a father of ten. Sharmill Films

Firstly, there have been many regarding mafia connections (which he denies). Additionally, his divorce and remarriage — his second wife, Assunta, appears here but his first, Antonietta, is only included in archival images — were controversial in the Italian community; the scandal is addressed implicitly. Another controversy, eldest son Luigi’s prosecution for drug dealing, is the outcome, Cozzo suggests, of his own leniency as a parent (as well as Luigi being a “fool”).

Luigi, who was cleared of a charge of threatening to kill his father five years ago, is not even mentioned by name in this film, let alone interviewed.

There are two Franco Cozzo stores these days. The film concentrates on the purpose-built Footscray store and gives less time to the Brunswick outlet (North Melbourne, it seems, was lost in the divorce).

The Cozzo store in Footscray is now largely used for storage. Sharmill Films

Much of the Footscray property is currently closed to the public and used as a storeroom. Yet Cozzo insists he will maintain a shopfront presence to sell his stock. Which makes sense: why wouldn’t he continue to make as much as he can of his image and his legacy?

As the man himself says: “No other people popular like Franco Cozzo in Melbourne”.