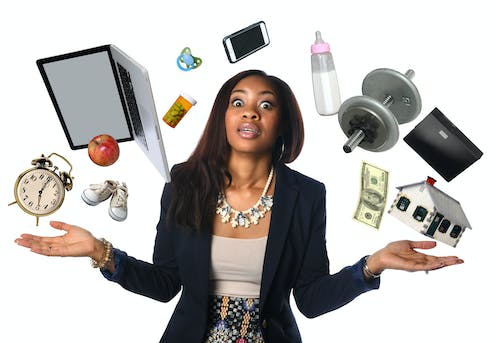 Female academics continue to be underrepresented in senior academic positions in Australia and internationally. Most research has focused on the low number of women professors at universities. But the largest drop-off in the number of female academics is between two mid-level positions: lecturer and senior lecturer.

Female academics continue to be underrepresented in senior academic positions in Australia and internationally. Most research has focused on the low number of women professors at universities. But the largest drop-off in the number of female academics is between two mid-level positions: lecturer and senior lecturer.

We set out to find why this occurs, using a new method to explore the career journeys of male and female academics. We found they continue to experience different careers: men commonly described a clear run at their career goals, while many women found themselves in a holding pattern as a result of having to juggle other responsibilities.

Chart: The Conversation. Data: Department of Education, Skills and Employment Higher Education Staff Data 2020, CC BY Read more: No change at the top for university leaders as men outnumber women 3 to 1 Most female lecturers in our study were ambitious, but unable to fully commit to their careers. The main reasons for this included their avoidance of work-life conflict, undertaking service activities and a lack of support from colleagues. Our research shows gender equity efforts need to target this holding pattern for women to make career progress. COVID-19 is expected to further set back the careers of female academics. Rather than writing papers, they are likely to be at home looking after children. Journal editors have already noticed fewer submissions from female academics. Read more: How COVID is widening the academic gender divide Exploring the holding pattern To explore the careers of female academics we created a new method called Draw, Write, Reflect (DWR). We asked 18 male and 29 female academics at one university to draw or write their career journeys, since not all knowledge can be expressed in words. Our participants confirmed drawing made it easier to express their experiences and relay emotions. Next, we asked respondents to reflect on their drawing. We also interviewed nine senior stakeholders including executive leaders, HR managers and gender equity committee members. Male academics had a clear career focus and many described their career journeys as “lucky” or “privileged” and with “tailwinds”. One example of a drawing by a male academic is shown below. He drew a snakes and ladders game to represent his “lucky” career, with ladders well outnumbering snakes on his game board.

Another male academic wrote “tailwinds” on his drawing as shown below.

Female academics were much more likely to include their families in their career drawings, highlighting the interrelatedness of work and family. Those with children were all primary carers. Their academic work had one set of requirements, their family another and both required their attention, often at the same time.

This situation resulted in a constant struggle and negotiation, as the drawing below shows.

Connectedness was also clear in the drawing below created by another female academic.

To maintain a level of balance – “to keep my head above water” as one put it – most female academics chose not to progress their careers. They could not see themselves successfully managing their domestic tasks in a senior lecturer role. One female lecturer said:

“Half the time I feel like I am sinking, so for now I am happy just to keep doing the best I can in my job and then retire at the age of 65.”

Seven of the eight female lecturers reported putting their career aspirations on hold.

Read more: Forget the ideal worker myth. Unis need to become more inclusive for all women (men will benefit too)

This situation was confirmed by a member of the executive leadership team who said some women:

[…] have literally taken on a lot of things that you can tell no one else wants to do – academic housework.

“I am ambitious and if this was a man sitting here there would be a different connotation of ‘Wow, you’ve done well!’, but for a woman it is like, ‘Well, how are your children? And your family and everything else?’ So, there is an issue.”

Another female academic reported “thinking like a man” had helped her have a very successful career. She reported that this requires not thinking about family, putting yourself first and “being selfish”.

Fear of backlash may stop some women, however, from pursuing career progression.

Read more: Time to gender parity has blown out to 135 years. Here's what women can do to close the gap

What can universities do?

Despite their career aspirations, organisational and personal reasons resulted in women not pursuing promotion to senior lecturer and beyond. Our study identified a clear holding pattern among female lecturers that inhibited their progression to the next level.

Universities can help female lecturers break the holding pattern cycle and assist their career progression. They can start by developing guidance in better negotiating academic housework and service tasks and by changing the narrative and culture around career ambition for women at universities. This will be a win-win for female academics and universities.