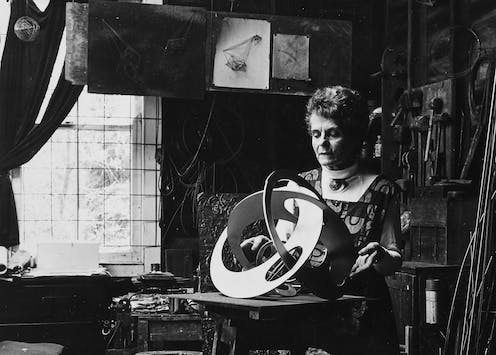 Sculptor Margel Hinder with the model for Interlock in 1973. Photograph: Richard Beck. Heide

Many years ago my daily pleasure was to walk past a Margel Hinder masterpiece, the Civic Park Fountain in Newcastle. With water spraying in rhythmic patterns, it would bring a smile to my face for its beauty, the way the streams caught the light.

Many years ago my daily pleasure was to walk past a Margel Hinder masterpiece, the Civic Park Fountain in Newcastle. With water spraying in rhythmic patterns, it would bring a smile to my face for its beauty, the way the streams caught the light.

Fountains can’t be moved for an exhibition, of course, but Hinder’s Civic Park Fountain and her sadly decommissioned Northpoint Fountain of 1975 have been digitally simulated by Andrew Yip for Margel Hinder: Modern in Motion, a joint project of Heide Museum of Modern Art and the Art Gallery of New South Wales.

Throughout the 1960s and 70s Hinder was commissioned to create sculptures for Australia’s public places, including the Reserve Bank in Sydney, Woden Town Square in Canberra and the Telecommunications Building in Adelaide. So her work has hardly been hidden from the public gaze.

But for many years the dominant book on Australian art was Bernard Smith’s Australian Painting. As a result, artists in other media are less well known than they deserve to be.

The Art Gallery of New South Wales began collecting her work in 1949. Nevertheless the range of the sculptures in the current exhibition is still a surprise. With mostly small works, this is sculpture at its most intimate – welcoming the viewer into a world where asymmetrical form rules.

Margel Ina Harris was born in New York, brought up in Buffalo, and lived in Boston with a family that encouraged creativity.

In 1929, at the age of 23, she went to a summer school in upstate New York to work with the modernist artist Emil Bisttram. There she met young Australian artist and designer Frank Hinder. They married in 1930 and daughter Enid was born the following year.

In 1933, at the depths of the Great Depression, the Hinders travelled to New Mexico, again to work with Bisstram. Margel took nourishment from the dry sculptural Mesa landscapes of Taos – and observed the rhythms and of the Pueblo women as they went about their daily business. Her approach to form began to change from modelling to carving.

On the family’s subsequent slow sea voyage from the US to Sydney, she carved her first wooden relief sculpture, Taos Women. After arriving in Sydney she carved Pueblo Indian, a simplified solid form emerging from the wood.

In Gerald Lewers, Margel found a fellow sculptor who understood her exploration of wood as form. She later wrote that Gerald Lewers “was the most developed of any sculptors here in Sydney”.

In 1939 she made Mother and Child, a work less about the subject and more about honouring the material from which it is made.

Her methods changed again during and after the second world war. The Hinders moved to Canberra where Frank worked on camouflage projects for the Department of Home Security and Margel made small wooden models.

After the war they returned to Gordon in Sydney and a house that backed onto the bush. There birds would come to feed in the elaborate sculpture Frank made for them. Margel worked in her studio, surrounded by the light and sounds of the bush.

Her work became more constructive. And a new element entered — light. She sometimes used hand-coloured Perspex to get particular effects.

She shaped and soldered wire to cast shadows. Revolving Random Dots (1953) spins using a swivel mechanism, while movement in other constructions is aided by a carefully placed fan.

Many of her small sculptures were first exhibited at the NSW Contemporary Art Society, the only ready exhibition venue for modernist art.

At the same time, Hinder was entering public sculpture competitions. Most of these were local events, associated with the post-war building boom. But in 1953 she was awarded third prize out of 3502 entries in an international competition for a memorial to the Unknown Political Prisoner. Her entry shows an abstract embrace of an ethereal shape. Along with work by the other finalists, her maquette was exhibited at the Tate in London.

The sculptures made for public spaces are bolder, more assertive than her smaller private sculptures. This is art made to withstand the elements but also bold statements disrupting the straight lines of corporate architecture.

The fate of the Western Assurance work is a reminder that sculptors face an extra peril in preserving their art. In the 1980s the building and the sculpture were demolished. Fortunately a passer-by alerted the Hinders who were able to salvage the pieces. The work was eventually reassembled at the University of Technology where it remains on permanent view.

Hinder was determined never to be defined by her gender or as a wife and mother. This was not only evident in her own single-minded pursuit of art, but in her frequent advice to young women that they must persist in their careers and not abandon art after having children. Talent, she believed, should not be wasted.

In the 1950s and 60s there was considerable cultural pressure on Australian women to limit themselves to domesticity. Hinder’s remarkable career was supported at every step by Frank, who sometimes did the heavy lifting (literally) in the creation of her larger works.

Their closeness might be one reason why previous survey exhibitions at Newcastle, Bathurst and the Art Gallery of NSW presented their work together. Now it is time for her art to stand alone.

Margel Hinder: Modern in Motion is at Heide Museum of Modern Art until 6 February 2022.