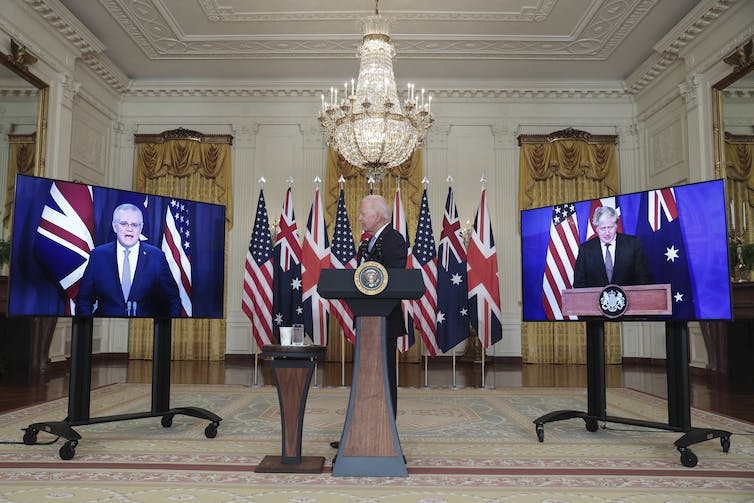 Friendly nations will breathe a sigh of relief, freed from the awkward task of calling out Australia on that basic climate pledge. But the target won’t afford Australia much cover in Glasgow.

This nation still doesn’t have a 2030 emissions-reduction target that passes international muster. Nor does it have policies to achieve greater near-term emissions cuts, or a strategy for the economic and social transition.

The paucity of process around Australia’s climate policy must end. We need a proper long-term emissions strategy – one that’s transparent, inclusive and informed by the best available knowledge.

Australia still does not have a 2030 target that passes international muster. EPA

Does the net-zero target matter?

Net-zero targets or pledges have now been proclaimed by almost all developed countries and many industrialising countries - including China, Russia and Saudia Arabia, which all came in before Australia.

Targets for the middle of the century can be cynically regarded as an attempt to kick the can down the road. But they’re important signposts – an affirmation of commitment to the long-term goals of the Paris Agreement.

And importantly, a long-term commitment implies the need for action in the meantime.

Net-zero targets are likely to be increasingly influential in future policy-making. And they matter for investment decisions.

In Australia, the net-zero target could serve yet another function. The fact it was adopted by a conservative government previously opposed to substantial climate action could help end the political “climate wars” which have raged in Australia since 2009.

Net-zero will likely be a durable bipartisan cornerstone – giving the political contest a chance to move beyond whether to do it, to how to do it.

Read more: Reaching net zero is every minister's problem. Here's how they can make better decisions

That said, mid-century net-zero targets will be mostly taken for granted at Glasgow. High-level political talks will be focused on stronger emissions targets for 2030 – and almost all developed countries have 2030 targets far more ambitious than Australia’s.

Australia will aim for a 26-28% emissions reduction by 2030, based on 2005 levels. The key point of comparison is the United States, which has committed to a 50-52% reduction in the same time period.

Other important reference points include the United Kingdom and European Union, which respectively aim for emissions reductions of 68% and 55% on 1990 levels. Japan has pledged to cut emissions by 46% based on 2013 levels.

Australia’s 2030 ambition, put forward at the Paris climate talks in 2015, was relatively weak even back then. Six years on, it’s not even in the ballpark of what’s acceptable internationally. And Australia will be just about alone among developed countries in not having updated its target since Paris.

The majority of the 26% target has already been fulfilled, through reductions in emissions from land-use change and forestry, which occurred mostly during 2005 to 2012. In fact, the latest official figures project Australia’s emissions will decline by 30-38% by 2030, without new policy efforts beyond technology support.

The government’s tactic is to argue that Australia over-achieves on its targets. But the purpose of setting targets is to define an ambition, and let that ambition drive policy action.

Other nations will rightly argue the projections show Australia should take on a target far more ambitious than 38%, let alone the current 26-28%.

The existing target is also inadequate to guide the transition to a low carbon economy. The Business Council of Australia is now calling for a 46-50% emissions reduction by 2030.

We need a national plan

The document accompanying the federal government’s net-zero announcement last week was heavy on politics and light on analysis. The government called it a “plan”, but in reality it was little more than a statement of aspiration.

First, it assumes technological innovation will take Australia most of the way to net-zero. But much of the technology we need already exists. This includes but is not limited to sectors such as:

After many years of very little climate policy, even a moderate policy effort could harvest much low-hanging fruit.

Policies can be tailored to specific applications, including market and regulatory reform, R&D support, and broad-based and specific incentives and regulations. They can also help with the economic transition in particular regions and industries.

A carbon price is a key part of a sensible policy mix. Carbon pricing is the most cost-effective mechanism to shift to low-emissions production. Australia’s political class must overcome its hang-ups about carbon pricing. Over 20% of global emissions are now subject to emissions trading or a carbon tax, and for good reason.

Much of the technology Australia needs for it’s low-carbon transition already exists. Shutterstock

Where are the costs?

But there’s no escaping the fact Australia’s fossil fuel industries will bear most of the economic cost of a global shift to net-zero, as demand for fossil fuels declines and eventually dries up. This is out of the government’s hands.

Governments can help, though – not by propping up old industries, but by investing in infrastructure and economic diversification, worker retraining and social programs.

And there’s a huge upside to the transition. Australia’s comparative advantage in renewable energy means such industries could become very large, if we’re smart about it.

Quite inexplicably, the modelling underpinning the government’s net-zero plan has not been released. It’s but one small illustration of the paucity of process around climate policy in Australia.

Governments dropping glossy brochures brimming with political messaging, produced behind closed doors, is not the way to deal with a complex long term national issue.

Brochures brimming with political messaging are not a way to to address a national problem. AAP

Australia needs a proper long-term emissions strategy that fully maps out how to position the nation for success in a low-carbon world. It should be developed openly, draw from the best available knowledge and bring major stakeholders to the table.

Out of that, a shared understanding can be forged between industry, federal and state governments, the unions, civil society and communities. Universities can bring research and analysis to the table.

Many other countries have prepared long-term emissions strategies of this kind, often led by independent statutory agencies like Australia’s Climate Change Authority.

Perhaps our prime minister will return from Glasgow with a few good ideas for how to start a real conversation.