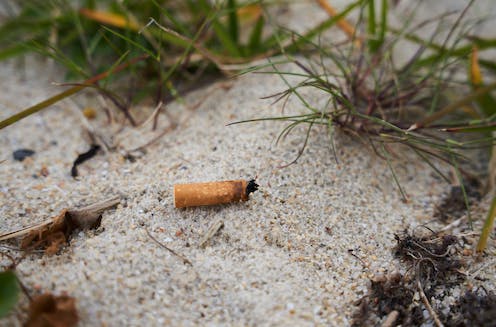 Cigarette butts with filters are the most commonly littered item worldwide, with a staggering 4.5 trillion of them tossed into the environment each year. This is a huge problem; many end up on beaches and in the ocean, and the tar from burnt tobacco in the filter can be toxic to wildlife.

Fixing the problem has focused on changing the behaviour of people who smoke, but a new report shows making the tobacco industry responsible for the litter with a mandatory product stewardship scheme is likely to have a much greater impact.

In Australia alone, it’s estimated up to 8.9 billion butts are littered each year. Under the proposed scheme, we could potentially reduce this by 4.45 billion a year.

So how can it be done in practice? And what would the benefits be from a policy like this?

Smoked cigarette filters take months or even years to break down. Shutterstock

Research from 2019 found adding cigarette butts to soil reduces the germination of grass and clover seeds and the length of their shoots. Seaworms exposed to used filters have DNA damage and reduced growth.

Read more: Cigarette butts are the forgotten plastic pollution – and they could be killing our plants

Currently, the tobacco industry does not have to pay for the clean-up of cigarette butts polluting the environment. Rather, the community bears the cost. Cigarette litter and its management costs the Australian economy an estimated A$73 million per year.

Local councils in particular spend large amounts of money cleaning it up. The City of Sydney, for example, has estimated their cleaning crews sweep up 15,000 cigarette butts daily from city streets.

And volunteers spend countless hours picking up cigarette butts from parks, streets and beaches. In its 2020 Rubbish Report, Clean Up Australia Day found cigarette butts accounted for 16% of all recorded items.

The tobacco industry response to product waste has been to focus responsibility on the consumer. Tobacco companies have created public education campaigns aimed at increasing awareness of the butt litter problem, supplied consumers and cities worldwide with public ashtrays, and funded anti-litter groups.

But given the amount of cigarettes that continue to be littered, it’s clear these strategies on their own have been ineffective. Many around the world are now calling for stronger industry regulation.

There have also been calls to ban cigarette filters completely. For example, lawmakers in California and New York have attempted to ban the sale of cigarettes with filters, and New Zealand is finalising their Smokefree Aotearoa Action Plan, which may include a cigarette filter ban.

Read more: A type of ‘biodegradable’ plastic will soon be phased out in Australia. That’s a big win for the environment

Many jurisdictions in Australia and worldwide are starting to ban single-use plastics such as straws and takeaway containers, and have been criticised for not including cigarette filters in these laws.

A pubic cigarette butt disposal facility in Salem, US. Shutterstock

Product stewardship schemes can be voluntary or written into law. For example, waste from product packaging is managed through a voluntary scheme, the Australian Packaging Covenant, which sets targets for reducing packaging waste that aren’t written into law. On the other hand, there is a law in Australia requiring companies who manufacture TVs or computers to pay some of the costs for recycling these products.

Cigarette litter costs the Australian economy an estimated A$73 million each year. Brian Yurasits/Unsplash, CC BY

Each of these options were ranked according to factors such as the regulatory effort required to implement them, their cost, consumer participation and the extent to which they would reduce environmental impacts on land and waterways.

This scheme could involve a tax that would pay for the recovery and processing costs associated with cigarette butt litter. The study suggested introducing a levy of A$0.004 – less than half a cent – on each smoked cigarette to manage the waste. Other studies from overseas, however, show this cost would need to be higher.

Read more: Filters: a cigarette engineering hoax that harms both smokers and the environment

We can look to the UK for an example of where to start. The UK is currently considering implementing an extended producer responsibility scheme to address cigarette litter. In November this year, it released a consultation document on different options.

They proposed a mandatory scheme where the tobacco industry would pay for the full costs of cleaning up and processing cigarette waste. Other costs they might be made to pay are for gathering and reporting data on tobacco product waste, provision of bins for cigarette butts, and campaigns to promote responsible disposal by consumers.

It is time for the federal and state governments in Australia to make the tobacco industry pay for the mess they create.