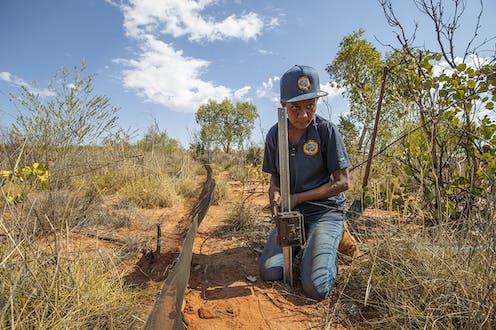 Indigenous people across Australia place tremendous cultural and customary value on many species and ecological communities. The very presence of a plant or animal species can trigger an Indigenous person to recall and share knowledge. This is crucial to maintaining culture and managing Country.

But as species disappear, ancient knowledge built up over thousands of years also fades away – and fragments of our culture are lost forever.

For years, Indigenous groups have pushed for the right to partner with government authorities to “co-manage” culturally significant species and communities. Such recognition of Indigenous rights would require amendments to environment and land management laws.

Australia’s Indigenous estate takes in about 51% of the range of the nation’s threatened vertebrate species.

The Indigenous estate refers to the assets held, or reasonably likely to be held, by or for the benefit of Aboriginal and/or Torres Strait Islander people. It includes land and sea held through such means as traditional ownership, native title and land rights organisations. It also includes intangible values such as cultural rights, practice and expression, as well as Indigenous knowledge and traditional management.

A range of state and federal programs involve Indigenous participation in land and sea management, offering invaluable protection to the Indigenous estate. These include Indigenous Protected Areas and the successful Indigenous Ranger program.

And many governments and other groups recognise that species and ecological communities can have significant cultural, spiritual and customary value to Indigenous Australians. But often, no legal mechanism exists to protect these entities.

Read more: Why the Australian government must listen to Torres Strait leaders on climate change

Indigenous Australians have successfully managed this continent’s landscapes and seascapes for tens of thousands of years. Their approach is holistic and integrated – considering the whole cultural landscape with a deep understanding of the interconnected relationships between species and Country.

In contrast, management actions under federal environment law focus on the outcomes of the listed species instead of the overall health of Country.

All this has left Indigenous groups underfunded and at the mercy of national-level management decisions, as opposed to place-based Indigenous-led action.

The EPBC Act was recently reviewed by Professor Graeme Samuel, who was commissioned by the federal government. His final report in 2020 found the law was failing in many ways.

Samuel recommended a suite of reforms. Among other goals, they aimed to “respect and harness the knowledge of Indigenous Australians”. One year on and progress on implementing the 38 recommendations is slow.

Among the recommendations were that the EPBC Act adopt a set of legally enforceable “national environmental standards” – clear rules that protect the environment and enable sustainable development. The standards would cover matters such as threatened species, compliance, environmental data and Indigenous engagement and participation in decision-making.

It was both surprising and disappointing that Indigenous knowledge was not embedded across all proposed environmental standards. The omission means Indigenous perspectives will continue to be relegated to a stand-alone standard of “participation”.

In particular, the national standard pertaining to threatened species made no reference to Indigenous knowledge or the Indigenous estate. And proposed interim standards completely omit Indigenous engagement, participation and values.

Without a mandate to include Indigenous people in threatened species planning and recovery, biodiversity will remain at risk. What’s more, significant gaps in the application of Indigenous Knowledge and protection of the Indigenous estate will continue.

A new kind of recognition

During the submission process of the review, many Indigenous and non-Indigenous organisations lobbied for the recognition of “culturally significant entities”. These groups include the government’s own Indigenous Advisory Committee and Threatened Species Scientific Committee.

“Culturally significant entities” are species and sites of great or exceptional cultural importance to Indigenous Australians. They might be a source of identity, a medicine, lore, an important traditional food or required for cultural practices. They usually feature prominently in Indigenous knowledge, language and ceremonies.

Submissions to the review called for these entities to be formally recognised under the EPBC Act and afforded a far higher level of protection. They also called for the mandatory participation of Indigenous Australians in threatened species nominations, listings, policy and management.

Many Indigenous Australians were disappointed this measure was not mentioned in Samuel’s final report. Without proper legal protection, culturally significant entities will not be assessed and can be damaged by threats such as climate change, inappropriate land management and poorly conceived development proposals.

Read more: Australia's plants and animals have long been used without Indigenous consent. Now Queensland has taken a stand

From engagement to empowerment

It’s time for governments and conservation groups to recognise the enduring value of the Indigenous estate and knowledge in curbing Australia’s parlous record of biodiversity loss.

While many of Samuel’s recommendations attempted to address issues raised by Indigenous Australians, they fall short of true empowerment and global best practice.

As the size and scale of the Indigenous estate continues to grow, so to does the opportunity to arrest biodiversity decline. Rather than sitting in the back seat, Indigenous Australians must be up front in managing the recovery of Australia’s unique and precious environment.

The authors acknowledge and thank the following people for their contributions to this work and article: Oliver Costello, a Bundjalung man; and Cissy Gore-Birch, a Jaru, Nyikina and Balanggarra woman, and Executive Manager Aboriginal Engagement at Bush Heritage Australia.