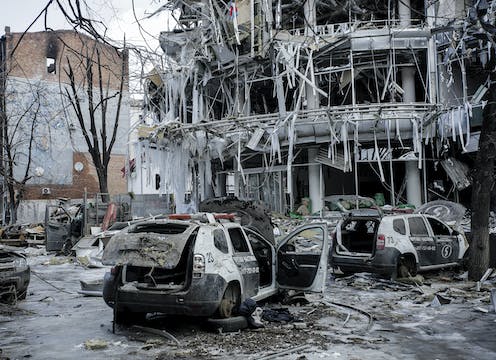 The International Court of Justice (ICJ), the top court of the United Nations, has ordered Russia to “immediately suspend” its military operations in Ukraine. What does the decision mean, and what happens next?

We already knew Russia’s invasion was illegal in international law. But the ICJ decision now makes it virtually impossible for anyone, including Russia, to deny that illegality. It is also impressive because Ukraine used a creative strategy to get the ICJ to hear the case, based on the Genocide Convention of 1948.

Russia’s legal arguments about the war

Russia’s president, Vladimir Putin, gave several justifications for invading Ukraine. Some had little to do with the law, such as his complaints about NATO. But two were legal arguments.

First, he claimed Russia was acting in “self-defence”. Self-defence is an established reason to use military force in international law. But Putin suggested Russia was defending the two breakaway parts of eastern Ukraine it recognises as sovereign states: Donetsk and Luhansk. Legally, these are still parts of Ukraine’s own territory, not independent states, which makes nonsense of this argument.

Second, Putin claimed Ukraine was committing genocide against ethnic Russians (where “genocide” means certain acts committed with “intent to destroy” an ethnic group or another defined group). This is just as factually and legally flimsy as the self-defence argument.

If both arguments are weak, why did Ukraine focus on genocide in the case before the ICJ? To understand, we have to look at the court’s jurisdiction: that is, its power to decide some legal issues but not others.

The jurisdiction of the ICJ

The ICJ hears disputes solely between sovereign states (in contrast to the separate International Criminal Court, which tries individuals for committing things like war crimes).

The ICJ does not automatically have jurisdiction over every state and every issue. There is no global government that could give it that power. Like many other aspects of international law, its jurisdiction relies on states giving consent – agreement – either directly or indirectly.

Read more: Is international law powerless against Russian aggression in Ukraine? No, but it's complicated

Some states have given consent by making general declarations. Other states have consented to particular treaties that give the ICJ the power to decide disputes related specifically to those treaties.

Since Russia has not made a general declaration, Ukraine could not ask the ICJ to rule on its self-defence argument. But Russia is a party to a relevant treaty, the Genocide Convention.

Ukraine’s creative strategy was to try to bring the case within the ICJ’s jurisdiction by arguing that Russia was making a false allegation of genocide to justify its illegal invasion.

People demonstrate in support of the Ukraine outside the ICJ, the UN’s top court, in The Hague. Peter Dejong/AP

The order made by the ICJ

Russia did not turn up to the courtroom in The Hague for the initial hearing in early March (though it did write the ICJ a letter outlining its view).

That is a change in its behaviour. After Russia invaded Georgia in 2008, Georgia similarly brought a case to the ICJ and tried to use a different treaty to bring it within the court’s jurisdiction. Russia participated in the case and actually had significant success.

Its failure to turn up this time signals its disengagement from international institutions.

Of the 15 judges, almost all agreed to order Russia to “immediately suspend” its military operations. There were two dissenters: the judges of Russian and Chinese nationality.

This was what is called a “provisional measures” order – an emergency ruling made before the court hears the whole case. Provisional measures are binding. That is important. It means even if Russia maintains incorrectly that the invasion is legal, it is now breaching international law anyway by failing to comply with the ICJ’s order.

However, a binding ruling is not the same as an enforceable one. Just as there is no global government to give the ICJ more power, there are no global police to enforce its decisions.

For example, in 1999, the ICJ ordered the United States to delay executing a German man on death row. Although the court confirmed such a provisional measure was binding, it could not actually stop the execution.

But ICJ decisions can play a more subtle role. They shape the narrative for law-abiding states and within the United Nations.

This ruling might help to embolden other states, including some that until now have been sitting on the fence, to contribute to actions like suffocating Russia’s economy with sanctions and arming Ukraine.

Read more: Civilians are being killed in Ukraine. So, why is investigating war crimes so difficult?

All the ICJ has done so far is to order provisional measures. It has not even found conclusively that it has jurisdiction in the case. It might be a long time before it decides the case as a whole.

But it has hinted it is receptive to Ukraine’s arguments. It has noted that it “is not in possession of evidence” to support Russia’s allegation that Ukraine has committed genocide.

Another strength of Ukraine’s case is that there is, in any event, no rule in international law automatically giving one state a right to invade another state to stop a genocide. One reason is that a cynical aggressor could manipulate or abuse such a rule. That is basically what this case is all about.