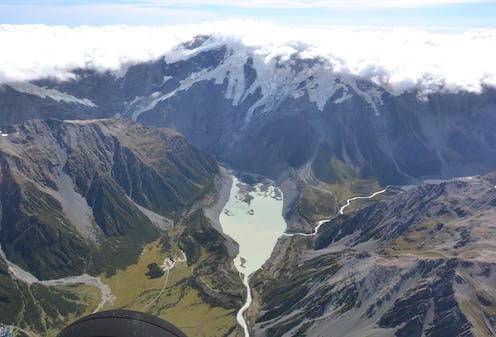 Earlier this month, we wrapped up the latest annual end-of-summer snowline survey over New Zealand’s South Island (Te Waipounamu), providing a birdseye view of how glaciers fared during the past year.

This collection of aerial photos adds to a near half-century perspective of irrefutable and dramatic climate change...

Earlier this month, we wrapped up the latest annual end-of-summer snowline survey over New Zealand’s South Island (Te Waipounamu), providing a birdseye view of how glaciers fared during the past year.

This collection of aerial photos adds to a near half-century perspective of irrefutable and dramatic climate change impacts on New Zealand’s frozen landscapes.

To put it bluntly, New Zealand’s glaciers look emaciated. Another Tasman Sea marine heat wave punctuated the hottest year on record nationally at the close of 2021, bathing the Southern Alps in warmth. That pattern continued into the Southern Hemisphere summer of 2022.

As New Zealand’s glaciers continue to feel the heat and shrink, bedrock that has not seen daylight for ages becomes exposed. Basins filled with meltwater begin to multiply across the landscape. In many cases, a ring of dirt and rock around some of New Zealand’s largest lakes marks where ice once reached.

Scientists are building a picture of how and when glaciers retreated over millennia. @bexparsonsking @niwa_NZ.

Fingerprints of change in the landscape

The ridge-like mounds of rocks retreating glaciers leave behind are called moraines. Directly in front of some of the largest Southern Alps glaciers, fresh moraines circumscribe turquoise-tinted lakes, with ice calving into them. This scene doesn’t leave room for denial of the rapid retreat of ice from the alpine landscape.

Downstream, more extensive moraines are wrapped like ribbons around massive lake basins that lie along the edge of the Southern Alps. Some of these landforms stretch for miles, and they illustrate ice was much more extensive in the past.

We know the processes that formed those moraines must have been similar to what we observe today. But how old are they? What happened to the massive ice that was once there, and why did it retreat?

A new mechanism that explains a rapid shift at the end of the last ice age – called the Zealandia Switch – is founded on New Zealand moraine evidence. This new hypothesis is challenging a long-held view about why glaciers changed in the recent and distant past.

While the Zealandia Switch focuses on global ice retreat for prehistoric times, we think it may also explain what is happening right now with our glaciers.

Clues from a nearly sunken continent

This method measures how long rocks found on the surface today have been exposed to cosmic rays. Boulders that have been carried inside flowing ice have zero exposure history.

When they are dropped onto a moraine and exposed to cosmic rays from outer space, their “cosmic clock” starts and the rare isotopes begin to accumulate inside minerals in the rock.

Once exposure dates for moraine boulders are established, they are linked to detailed maps that outline ice advance and retreat sequences. The major moraines around central Southern Alps lakes – Pukaki, Tekapo and Ōhau – now have hundreds of results showing rapid change happened about 18,000 years ago.

Read more: Climate explained: what is an ice age and how often do they happen?

Offshore in the Tasman Sea, microfossils from sediment cores indicate ocean currents and boundaries shifted at exactly the same time. Climate modelling can explain the simultaneous land and sea changes through a major switch of Southern Hemisphere westerly winds over the nearly-submerged Zealandia continent – hence the Zealandia Switch hypothesis.

When the Zealandia Switch turns on and spins up the southern westerlies, it helps to promote water vapour export from the tropics and atmospheric circulation patterns that drive warming in both hemispheres. If the Zealandia Switch hypothesis is upheld, then the story about Quaternary ice age origins and their impacts on global climate, plant ecosystems and ancient fauna will need to be rewritten.

The Zealandia Switch and ice loss

Fast forward 18,000 years and the southern winds of change are on the move again. Subtropical waters are being pumped into the Tasman Sea, driving more frequent marine heatwaves. New Zealand’s temperatures are soaring.

Atmospheric rivers loaded with tropical moisture are penetrating Antarctic latitudes and bringing record temperatures with them. The current situation has hallmarks of the Zealandia Switch playing an enhanced role – but this time, Earth is in an interglacial rather than an ice age state.

New Zealand’s summer snowline (also known as the New Zealand Equilibrium Line Altitude) has continued to rise in recent years. It is expected to be at least 200m above the 1981-2010 average elevation by next decade. Andrew Lorrey, CC BY-SA

A series of extremely hot years with exceptionally high snowlines that are driving this pattern have been linked to anthropogenic greenhouse gas emissions. Similar conclusions have been drawn for the recent acceleration of global ice loss.

The rise of the snowline is accelerating in the Southern Alps. By 2035, many glaciers monitored by NIWA are expected to be approaching extinction. Reproduced from Lorrey et al. (2022), CC BY-SA

These connections raise the possibility that human activities have flicked the Zealandia Switch to a higher level of the “ON” position, and it may remain stuck there for the foreseeable future. If what unfolds is anything similar to when the Zealandia Switch curtailed the ice age during the Last Glacial Termination, we can expect big, fast and global climate re-organisation impacts.

The changes ahead may also bring the beginning of the end – a final termination – for many glaciers north and south.