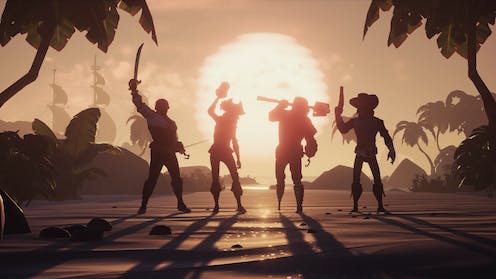 In 2015, well before the first iteration of r/place – a celebration of the collaborative chaos of online spaces – Reddit ran another curious experiment called r/thebutton.

The now inactive page once hosted a large red button at the top of its feed next to a 60-second countdown timer. Each individual user could only press the button once, an action that would then reset the countdown.

After just over two months, the countdown reached zero for the first time – when no users pressed the button before the 60 seconds were up. As a result, r/thebutton was archived and closed to further activity, having served no apparent purpose.

Both r/place and r/thebutton bore witness to an inane tribalism among their users that seemed to manifest out of the online space itself.

If a user pressed the button during a specific ten second interval, they were assigned a coloured “flair” next to their username, feeding into a manufactured hierarchy of factions within the community.

While loyalty forms these factions, a sense of community and belonging sustains them. This type of factional warfare is somewhat endemic to online spaces that invite interactivity. The invitation to interact is also an invitation to corrupt.

But this corruption isn’t always a negative tribalism. Circumventing the goals of game developers can also be a powerful act of community building and collaboration.

In games, interactivity exists on a scale of what a virtual world’s developer will allow. If a developer offers more freedom to their users, they offer more ways for users to interact with each other and the world according to users’ own goals and objectives.

In the virtual worlds of first person shooter video games (think Call of Duty or Halo) gamers know an allied player crouching down and then standing up repeatedly is trying to say hello. A quick crouch down/stand up response is the equivalent of waving hello back.

In Call of Duty, crouching down and standing up again is the equivalent of waving hello. AP Photo/Activision

In the absence of any ability to have their online avatar literally wave hello, players have circumvented the limits of the virtual space to do it anyway.

(Strangely, if the player is a member of the opposing team this same gesture is offensive and sexually suggestive.)

Users have manipulated and circumvented the rules of this world in order to fulfil any number of parallel – or even opposing – purposes based on their own needs and desires.

Shaping our own worlds

In a conversation I once had with Adelaide-based narrative designer and game developer Damon Reece, I asked Damon what game they were enjoying lately. They regaled me with an anecdote about Sea of Thieves (2018).

In this game, players are expected to play the role of a cutthroat pirate in competition with other marauding bands of pirates. Damon and their friends disregarded this objective and instead invited other players aboard their virtual pirate ship for drinking, dancing and general merriment.

Open-world games like Sea of Thieves offer opportunities for players to re-purpose the world of the game for their own needs. Rare

In video game terminology, an “open-world game” like Sea of Thieves is a virtual world open to the free-roaming of its players.

This freedom means the possibilities of these worlds are dictated by the communities that occupy them as much as it is by the developers that build them.

In Grand Theft Auto V (2013), the highest grossing media product of all time, players are meant to focus their efforts on building their own criminal empire. This is the advertised goal of the game and the fictional city of Los Santos is a virtual space designed to facilitate it.

Some of these are intended consequences of the game’s robust design – but most are the result of like-minded individuals collectively shaping their shared online spaces.

Across a broad spectrum of virtual worlds users have, time and again, repurposed the space to suit their needs.

Online spaces, just like offline ones, evolve to meet the demands of their users. For better or worse, they are fundamentally democratic spaces shaped by the communities that use them.

Where these online spaces diverge from their offline counterparts is in their global accessibility and their almost total anonymity.

It is difficult to imagine a democratic space occupied not by faces or bodies but by usernames and avatars, yet this is precisely the form of democracy offered by virtual worlds.

Read more: Gamer disclaimer: virtual worlds can be as fulfilling as real life