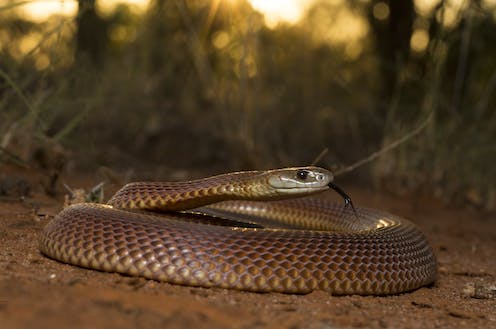 While most people go out of their way to avoid snakes, we’re the opposite. We’re crazy about snakes. As wildlife...

While most people go out of their way to avoid snakes, we’re the opposite. We’re crazy about snakes. As wildlife photographers, we’ve spent months in the Australian bush and in overseas jungles tracking down beautiful snakes.

But it’s all worth it for those moments when we round a corner and spot the scaly body of a species we haven’t seen before.

A juvenile King Cobra we photographed in Indonesia. Chris Hay

Why do we spend so much time looking for snakes?

Australia’s snakes are remarkably diverse and adaptable. We have over 200 different species across the land and sea. They have carved out niches in every possible habitat, from coastal rainforests to arid deserts to alpine regions.

It’s difficult to put into words about why we love snakes so much, but we have both been obsessed with the beauty and mystery of snakes since we were young children. This obscure obsession has developed into fascinating careers for both of us, which is also how we found each other.

Even though they’re found across the continent, our snakes are notoriously difficult to find. They’re exceptionally good at hiding. When we go herping (searching for snakes), we don’t just wander through the bush hoping to stumble across one. There’s quite a process we go through to boost our chances.

Snakes are hard to find. Here’s how we improve our chances.

First, we decide which species we want to photograph. To make our trips worthwhile, we often look for spots where the ranges of several target species overlap. Once we choose an area, we take a deep dive into the details of each species.

Combined, we have more than 50 years of snake knowledge to draw on. We use this to examine each species’ preferred habitats and microhabitats and where these features occur in our area.

To home in further, we focus on behaviour. Is it nocturnal? Is it active only in daytime? Or is it crepuscular, moving around only at dusk?

Once we’ve figured out the most likely spots to look, we have to choose the best time of year to go.

You might think summer is always the best, given reptiles are more active in the warmth. For some species, we’ve had better luck in cooler months, when they’re inactive. This can make them easier to find.

Once we’ve picked a time to go, we look at the local climate and weather forecasts to help predict the location and severity of storms.

Heavy rain is generally not good for herping, unless you’re looking for one of Australia’s 46 species of blind snakes, which come up from underground to escape drowning in water-logged soils.

But for the above-ground species we look for, the best conditions come when there’s been recent rain or the threat of rain. This is because rain leads to vegetation growth, which in turn increases insect activity and animals that feed on them, and so on and so forth. It stimulates activity throughout the food chain.

Once we’ve done all of this, we plan our trip and hopefully find some remarkable species to photograph. Success is, of course, not guaranteed. We once went looking for a species of whipsnake, spending a full week and $3000 in the process and still didn’t find the snake. But we did find many unusual lizards.

Herping is no relaxing holiday. It is very hard work requiring early mornings and late nights. To find nocturnal snakes, for instance, we have to stay up until the early hours of the morning. (Nocturnal snakes are active only in warmer months, and soak up radiant heat left over after the day). We often start early, too, since the best natural light for photography is early morning or late afternoon, when the sun is low in the sky.

We’re both registered snake catchers, so sometimes we’ll be called out to a job and find an interesting snake which we can photograph before releasing it.

A Reticulated Python we caught and relocated away from houses while in Indonesia. Chris Hay

When the stars align and we find one of the snakes we’ve been looking for, we have to make sure we don’t get too excited. Our safety is more important than any photograph.

We’re often in remote parts of Australia, hundreds of kilometres from any help. If one of us gets a snake bite, it would mean real trouble.

When you’re looking through a camera’s eye-piece, you can get the impression you’re further away from the snake than you really are. We’ve had to learn how to choose the right lens for each species, to ensure we can keep a safe distance without making the snake too small in the frame.

The authors demonstrating the level of safety required when photographing a Javan Spitting Cobra in Indonesia. Dan Mandarino

Only one of us takes the photographs at any one time. That’s because you need someone to watch the situation and make sure you’re not taking risks. As a husband and wife team, we place our full trust in each other. Distractions are not an option.

We don’t intend this to be a how-to guide for people to find dangerous reptiles and photograph them. Snake photography is not a hobby to dive into without a great deal of preparation and knowledge.

Having said that, it is a rewarding profession – particularly when you get a shot of a rare reptile that’s very hard to find. Getting a shot like this and seeing it used in books, field guides and online makes all the preparation worthwhile.