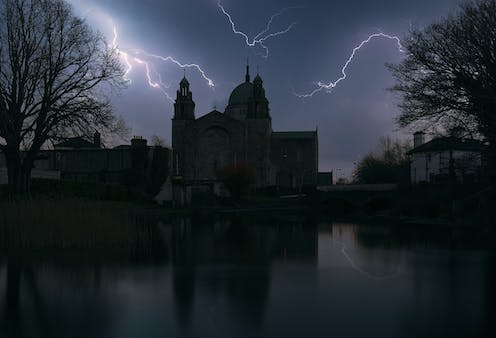 Dervla McTiernan appeared as a crime writer of impressive quality in 2018, and has already produced four novels across the past four years. Her new, stand-alone crime thriller, The Murder Rule, builds on those first three novels, and moves beyond them as well.

An Irish lawyer for 12 years, McTiernan’s migration to Perth from Ireland with her engineer-husband and family, was partly a result of the Irish financial crisis. Clients of her legal business were failing to pay their bills. Starting again in Australia became an opportunity for a shift in career from practising law to writing crime fiction.

Her new novel departs from the police procedural to offer something close to a court room drama based on the ways lawyers handle investigations, think about justice, compete with each other, play bluff with witnesses, and perhaps never truly reach beyond their prejudices.

Like her earlier novels, and most especially the first, this latest one is as much a meditation on relationships as it is a thriller.

Her first novel, The Rúin, was admirable for its attention to detail, its textured portrait of Irish settings, in particular the town of Galway in the west, and its interest in character. What I liked about this first novel was its relaxed, almost sprawling attitude to the arc of its story.

The set-up across the first hundred or so pages was meticulous in offering an array of characters and incidents seemingly as random as life itself can be. Such a slow build-up is a curious experience for a reader knowing all the while that this is crime fiction — where almost any detail might also be a clue — and that perhaps reading for the pleasure of well-judged observations and convincing glimpses into character is not paying the novel the right kind of attention. At one point in this first novel, well beyond a hundred pages in, her remarkably sensible, good and kind detective, Cormac Reilly, sits with a malevolent person of interest. When she gave an unsatisfactory answer to one of his questions, he nodded and resumed taking notes, slowly and methodically. It was an old habit when interviewing witnesses. Most people felt a certain anxiety during the silence. This is McTiernan’s method with the reader too, the “silence” in terms of clues, crimes, murders, trails, and revelations stretches out across the first hundred pages of her first novel until we want to kick her under the table to get her to confess what crime all this lovely writing is leading us towards. And she does, over the last two thirds of the novel, deliver the goods to the reader as much as any crime novel can. In the end, all crime novels must deliver the goods in terms of trouble and mayhem, and by implication, offer ideas about what leads some people into evil. Answers can be both banal and overwhelming. For an Irish writer, perhaps contemporary evil inevitably adheres to religion, especially the Roman Church, and more broadly, to families. Cormac’s police station is as riven with rivalries, secrets, grudges and gossip as any family.

A police station riven with rivalries. Shutterstock The Rúin offers the further interesting observation that both justice and evil can be decades in the making. Its double narrative strands stretch beyond four decades. Read more: My favourite detective: Kurt Wallander — too grumpy to like, relatable enough to get under your skin Terror of death What I found most remarkable in this novel, though, was the force and the authenticity with which McTiernan wrote about good people. Here is a crime writer with a real interest in the strength, the resilience, and the ordinary courage of people who are simply good – heroically good, as it turns out, when they are pressed so hard by evil. There are more good people in this novel than there are twisted, cruel, avaricious or self-serving characters. This is perhaps one factor in her crime writing that promises a freshness of approach. Her second novel, The Scholar, published in 2019, takes up the life of Cormac Reilly one year on from the first, in 2014. And this time it’s faster-paced, with a murder in the first chapter. It is a more violent novel too, and the characters are more sharply drawn. Cormac remains the good man and trusted partner to Emma we came to know in the first novel, but he emerges distinctly as a police officer in his heart and perhaps within his deepest self-identification. Physically, at 193 cm and 86kgs, Cormac is in the ball park of Jack Reacher’s 195 cm and 113 kgs, though Cormac’s BMI would be a healthier number than Reacher’s. We know this type from the genre. He is a character committed to two opposing principles: justice for the world and loyalty to friends. Cormac, though, is more torn by these opposing commitments than the socially challenged Jack Reacher ever will be. According to the relatively new philosophical movement known as Terror Management Theory “justice” might be deployed as a largely unconscious protection against the terrifying knowledge of our own certain personal death. Thus, justice as an abstract value can work in the service of mortality-denial. It is a value so much larger than the life of any individual that, though it might ask you to sacrifice your life, it gives your life a meaning beyond death. Love, too, especially in the form of loyalty to a partner, a family, or a tribe, can be its own deeply physical and immediate denial of the terror that this existential theory considers is unbearably near to each of us. Read more: Fear of death underlies most of our phobias Life at its extremes exposes which of these “management” impulses – abstract justice or loyalty to friends – might rule Cormac’s life. But a larger point might be that such books possibly work as thought experiments for the ways we, the readers, might manage for ourselves our own terror at the knowledge of personal death. There are moments in this novel too where the writing becomes its own source of pleasure. For instance, when Cormac meets the president of the University of Galway. The man was younger than Cormac had expected, channelling not so much the grizzled academic as the Silicon Valley up-and-comer. This brief reminder that each of us projects a style of being and tries to “channel” its better qualities is typical of the wit and liveliness of the writing. Character

While McTiernan’s third novel, The Good Turn (2020), completes a trilogy, it marks the beginning of a more settled and confident crime style for her. In this third part of the larger narrative arc of the novels, the sources of evil are in both petty and over-ambitious greed, and in ruthless, devious lust for sex with children. Awareness of the fragility of children is a presence that shadows all her writing. Cormac Reilly’s continuing troubles with his superintendent, complications in his relationship with the gifted research scientist, Emma, and his commitment to his vocation all come under ultimate stresses – with a resolution kept back, excitingly, until the last few pages. The plot finally turns on what seems at first an outrageous coincidence, but one that McTiernan handles so deftly that you can’t help but congratulate her. Like the other novels, she has woven a number of narrative strands, but this time without losing sight of any threads, and finally making a satisfying pattern of it. And there is the continued interest in character. In fact, Peter Fisher, off-sider to Cormac in the previous novels, now shares the limelight chapter by chapter in turn. He is a man as good as Cormac, and possibly his equal in tenacity and intelligence. Where Fisher is just starting out (will he ever come out from under his father’s petulant, bullying presence?), Cormac is coming up against the late consequences of his choices (will he ever make room for an intimate partner in his life?). One of the novel’s most complex corruptible characters, remarks of Cormac Reilly: “He’s an outsider, and he’s a troublemaker … A black-and-white operator in a world that’s all grey.” The novel worries at whether the grain of truth in this judgement is worth our consideration. Twists and turns take flight Though it is far removed from this trilogy, the latest novel does take up this question and worry at it. Idealism is pitted against cynical realism.

The novel bases itself upon a local chapter of the Innocence Project at the University of Virginia, with McTiernan’s new protagonist, Hannah Rokeby, asking whether these apparently idealistic lawyers and students aren’t actually after a CV, personal fame, a record of successes, or the glow of a self-satisfaction that blinds them to the occasions when they are manipulated. It’s a reasonable question (though perhaps implying an unfair criticism of the actual US-based Innocence Project, which works to free the innocent and prevent wrongful convictions), and even more reasonable to ask whether Rokeby is best fitted to answer the question. Read more: Serial shines spotlight on Innocence Projects – it would be a crime not to The reader must, in the end, make her own mind up, knowing that wherever her judgement lands it will bring with it a hefty dose of unacknowledged or unexamined prejudice. Do we read crime novels because we already know what is right and wrong, or do we read them because we know that we need guidance through a world that appears “all grey”? Rokeby is a more flawed, more complex and livelier character than Cormac Reilly. As a law student she is a formidable researcher and a brilliant court room strategist. She understands instinctively that bluff can be as powerful as knowledge in breaking open the truth. Again, as in the previous novels, justice is a long time coming – for the prisoner-culprit who has spent the last 12 years in prison, for Hannah’s mother who has written a journal that outrages and absorbs its reader, and for the villainy exposed in the final few pages. McTiernan’s confidence in plotting the twists and reversals of narrative here, and in her execution of the late, brilliant court room scene, has taken flight in this latest novel, bringing her into the territory of Tana French. McTiernan has managed this while allowing The Murder Rule some of the slow sprawl of the first novel. There is a steady build towards tension, increasing complexities in the lives of the characters, with extended interest in mother-daughter and mother-son relationships, and thoughtful questions about the assumptions most of us can’t resist adopting. If the moment of extreme violence and the late car chase are not carried off with convincing necessity, it’s a small price to pay for a novel that delivers so much on so many counts. The Murder Rule would work equally well as an introduction to McTiernan’s crime writing, or as the beginning of what might be a new trilogy. Authors: Kevin John Brophy, Emeritus Professor of Creative Writing, The University of Melbourne