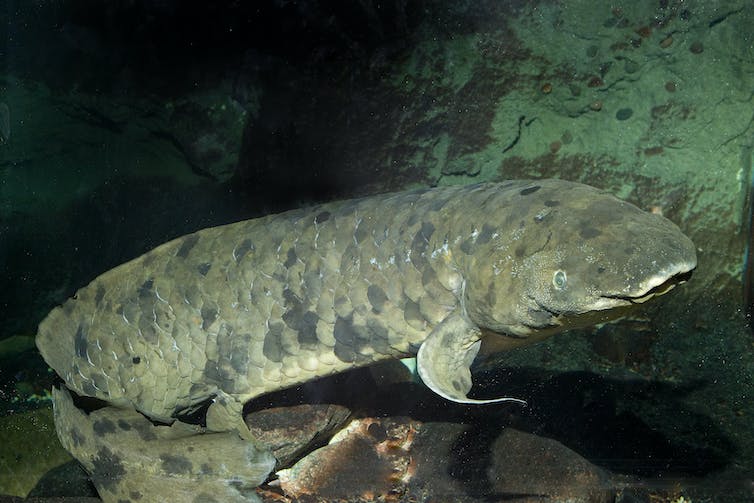 Some animals can live to a startlingly old age, from the famous 392-year-old “Greenland shark” to a 190-year-old tortoise in the Seychelles. Two science studies published last week brings us closer to understanding why some animal species can live for so long – far longer than humans.

The first, published in Science, debunked a few theories on why amphibians and reptiles (such as tortoises) live long lives. It found most reptiles and amphibians have highly variable rates of ageing and that, perhaps counter-intuitively, being coldblooded is not indicative of a long lifespan.

The only exception is turtles, which may fit the hypothesis of having a “protective phenotype”, where physical or chemical traits such as shells or venom enable a species to live longer.

The second study, which I was involved in, discovered the age of the world’s oldest aquarium fish: Granddad the lungfish.

Granddad was sent from Australia to Chicago in 1933 and lived in an aquarium until 2017. Our study measured changes in Granddad’s DNA to calculate his age at death. He was 109 years old.

Finding out how long an animal lives for isn’t easy, especially if they can outlive humans. It is well established that ageing is under genetic control, as the DNA sequence of certain genes can predict potential lifespan.

However, environmental pressures – such as getting eaten by a predator or succumbing to disease – can cut life off short, and may explain age differences between closely related species, such as between reptiles in the first study.

Here, I introduce you to five remarkably old animals and the fascinating lives they’ve led.

Granddad the lungfish, who lived to 109 years old. ©Shedd Aquarium

The world’s oldest lived aquarium fish is Granddad, the Australian lungfish. In our recent study, we used a DNA-based method to determine that Granddad was 109 years old when he died.

He lived a remarkable life. In 1933, Granddad made the 20-day voyage from Australia to the Chicago World’s Fair in the United States, where more than 100 million people visited him in the John G. Shedd Aquarium.

As its name suggests, Australian lungfish have the unique ability to breathe air from a single lung during dry spells, when streams become stagnant or water quality becomes poor.

The species, now endangered, has a deeply ancient lineage. Indeed, the Australian Lungfish is the closest living relative to all land-based “tetrapods” – four-limbed animals including frogs, humans, and even dinosaurs.

To find out Granddad’s age, we used a test that looks at “epigenetic” changes in the DNA, which occur from environmental changes and accumulate over a lifetime.

In fact, our study also identified the sub-population in Queensland Granddad came from. We learned Granddad originally came from the Burnett River, one of three rivers in Queensland home to Australian lungfish.

Another long-lived Australian animal was a sulphur-crested cockatoo named Cocky Bennett, who lived to 119.

Cocky lived at the Sea Breeze Hotel in Blakehurst, New South Wales, and even had a tribute written in the newspaper in 1916 when he died.

According to the tribute, Cocky would often say “one at time gentlemen, please” when other birds harassed him, and “one feather more and I’ll fly”. But due to a disease, Cocky was almost featherless for the last two decades of his exceptionally long life, and had a long, curved and twisted beak.

Prior to ruling the Sea Breeze Hotel, Cocky Bennett is thought to have accompanied a ship captain on his seafaring journeys for 78 years, and reportedly circled the globe seven times.

Read more: Don't disturb the cockatoos on your lawn, they're probably doing all your weeding for free

The Animal Ageing and Longevity Database report a much shorter lifespan for sulphur-crested cockatoos in the wild at 57 years. But in captivity, they can live as long as humans.

This is where researchers need to be careful, as lifespans are often longer for animals in captivity than would naturally occur in the wild.

A photo of Jonathan the tortoise in 2008. ST HELENA TOURIST BOARD / HO

Jonathan the Seychelles giant tortoise, at 190, currently holds the record for the oldest living land animal.

It’s estimated he hatched in 1832 in the Seychelles Islands. When he was around 50 years old, Jonathan was transported to St Helena, a remote island in the South Atlantic Ocean, and gifted to the St Helena governor. Jonathan has not only outlived the governor, but has seen 31 different governors hold office.

As the new study on reptiles and amphibians hypothesised, tortoises may be long-lived due to their extra protection from their shells. A lack of predators may also play an important role. For example, Galapagos giant tortoises can live to over 100 and are free from any natural predators.

A study famously discovered a Greenland shark that lives to around 400. Julius Nielsen via AP

The species, the Greenland shark, is thought to be the longest-lived animal with a backbone. We know only little about Greenland sharks. But a 2016 study used radiocarbon dating and found one to be 392 years old.

Living deep in the cold waters of the Arctic and North Atlantic oceans, these iconic sharks are also one of the slowest growing, at a rate of around 1 centimetre per year. Yet, these ocean giants can reach over 5 metres in length.

We know only little about Greenland sharks, including how long they can live for. It’s thought freezing polar waters may play a role in their longevity as it may slow down their metabolism.

The left valve of Ming the clam. Wikimedia, CC BY-SA

The ocean quahog is the world’s longest-lived species, with many reaching over 400 years. As a clam (or marine bivalve mollusk), it’s the only invertebrate on our list. Just like the Greenland shark, this species also lives in the cold waters of the North Atlantic Ocean.

One ocean quahog called “Ming” lived for 507 years. He was named after the Chinese dynasty in power when he was born in 1499, and was discovered off the coast of Iceland. His age was confirmed by counting growth bands on its shell, in the same way you’d count the rings of a tree.

Little is known to why ocean quahogs live for so long but, similar to the Greenland shark, it’s thought the colder waters may have a role in its long lifespan.

Read more: Meet 5 of Australia’s tiniest mammals, who tread a tightrope between life and death every night