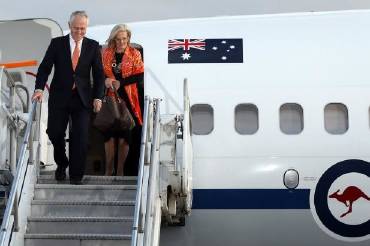 Thank you very much Mr President. You have welcomed me and my wife Lucy, you and your wife Iriana, have welcomed us, here with enormous warmth. We’ve enjoyed very frank and exciting discussions about the great future for our two countries.  A future that has really the widest opportunities in the history of human development. We’ve never seen technological change as rapid, economic growth as rapid as we do today and it is nowhere more exciting than it is in our region so our two countries are brilliantly poised for a very exciting future. The President and I discussed infrastructure and the vital importance of infrastructure in both our countries and the  President's passion as a former Mayor, no-one is, as my wife Lucy always reminds me, no-one is closer to the people than local Government and you understand the importance of really good infrastructure, as we do in Australia and  we've talked about how we can facilitate greater investment, how the infrastructure hub that was established in Sydney following the G20 can support that.

Fundamentally we need to make sure that there are projects that are ready for investment. That is absolutely critical and we talked about how we can do that. We had a very good discussion about the cattle industry. There is great complementarity between Northern Australia and Indonesia, between breeding and growing cattle in Indonesia – in Australia I should say – in exporting them,  live exports to Indonesia for fattening and processing.

There are also great opportunities for growing and breeding cattle in Indonesia as well and so we can see terrific opportunities for co-investment, Indonesian into Australia and Australia into Indonesia right across the whole product cycle of the beef industry. Both of us as former businessman understand the importance, the certainty and clarity in that. I think we’ve got a common vision there, Mr President.

We also, as the President said, talked about the challenge of violent extremism and we are in a, we have a common, a common struggle there. I have to say Mr President that I was very impressed by your, your deep reflection on this and your three fold approach to dealing with violent extremism, security, the law enforcement approach which of course is a vital part of the religious approach. Making it clear that what these extremist groups are preaching is not, is not the Islam that, that your nation endorses and that your people practice. And then of course, the cultural challenges and particularly the social challenges of all of us doing a better job at grappling with and confronting and rebutting the propaganda of these groups particularly in, in on the internet and social media. We have enormous enthusiasm from our respective Ministers for the Australian-Indonesian relationship and of course your Minister Panjaitan will be down in Australia very shortly and we look forward to welcoming him and of course Minister Robb, our Minister Robb the Trade Minister will be in Indonesia next week leading a 344 man and woman delegation to lead the discussions on Indonesia and Australia Business Week.

So, we, we have common, very common interests and common objectives and it is about growth, it’s about jobs, it’s about stronger economies, it’s about investment and we also share a great passion for cities and we had a very, very good discussions about, out on the veranda with our wives talking about planning and the opportunity for perhaps greater collaboration there.

There is a lot, there is a lot more that we can do. We are, we’re very close geographically and we now have real impetus I think in the relationship and we will build on that. Build on that momentum for a stronger and stronger Indonesia-Australia friendship. So it’s been a wonderful opportunity and I thank you so much Mr President for taking the time to welcome me so warmly.