Last month, French President Emmanuel Macron invited his counterparts from Libya, Niger, Chad, Italy, Germany and Spain to Paris to discuss ways of stopping the flow of irregular migrants and refugees through transit countries. The leaders explored the possibility of establishing processing facilities in North Africa to identify refugees and turn back anyone who does not qualify for resettlement.

The talks come two years after approximately one million people arrived by boat in Europe, 75% of whom came from some of the world’s top refugee producing countries such as Syria, Afghanistan and Iraq.

The numbers in 2017 are very different. As of September 12, 129,002 people have attempted the sea journey to Europe this year. But the drop in the number of people arriving is not enough for the EU. The pressure to stop the arrival of refugees and irregular migrants is becoming overwhelming in many European countries, where the rise of the extreme right has been linked to concerns over the lack of border protection and an unwarranted linking of terrorism with irregular migration.

Macron first proposed the idea of processing centres or “hotspots” in Libya in July, stating that France would be willing to set up the centres itself if the EU was not interested in funding the project. The validity of the idea was immediately questioned by NGOs such as Oxfam, and angered other European leaders such as Italy’s foreign minister, who criticised France for improvising policy without due consultation. The backlash led French officials to backtrack on the idea of hotspots and distance France from the proposal. This time, Macron is enlisting the help of Italy, Spain and Germany, and attempting to consult with the countries that may host such centres in order to make processing facilities funded by the EU in Libya, Niger and Chad a reality. 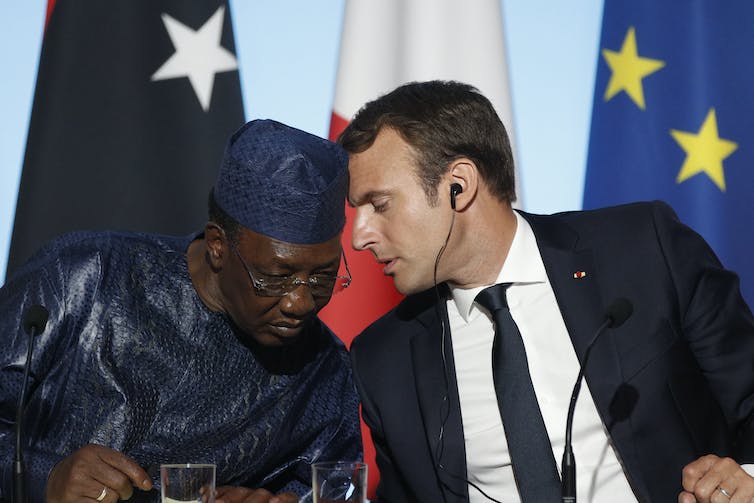 Whether he will be successful remains to be seen, and we don’t yet know what such a facility would look like. The joint statement from the meeting refers only vaguely to “new instruments for intensifying and facilitating voluntary returns and reintegration”.

What we do know, from the Australian and US experiences, is that processing centres in third countries have taken the form of detention facilities.

These have led to gross violations of international human rights law, including arbitrary detention; cruel, inhuman or degrading treatment or punishment; harm to children; torture and even loss of life. They have lacked adequate oversight and may have led to the return of refugees and others owed international protection, such as victims of torture, to harm.

There is no indication that a similar project funded in North Africa would be any different. In fact, there are legitimate concerns that funding transit countries in North Africa to stop irregular migration will “inadvertently support forces linked to human rights abuses” as reported by the Washington Post. Such forces are particularly present in Libya.

There has been an 87% drop in the number of irregular migrants and refugees travelling from Libya to Italy in the last year. This drop is reportedly due to the use of violence and unlawful detention by traffickers, militias, and other armed groups against refugees and irregular migrants.

Immigration detention centres have sprung up throughout Libya and non-government organisations such as Amnesty International have raised concerns about arbitrary detention, torture, rape and even murder of people in dangerously overcrowded facilities.

The amount of space per detainee [is] so limited that people are unable to stretch out at night, and there is little natural light or ventilation. Food shortages have led to adults suffering from acute malnutrition, with some patients needing urgent hospitalisation. With no rule of law in Libya, the detention system is harmful and exploitative. There is a disturbing lack of oversight and regulation. Basic legal and procedural safeguards to prevent torture and ill-treatment are not respected.

The estimated 700,000 to 1 million refugees and irregular migrants in Libya face harrowing conditions. 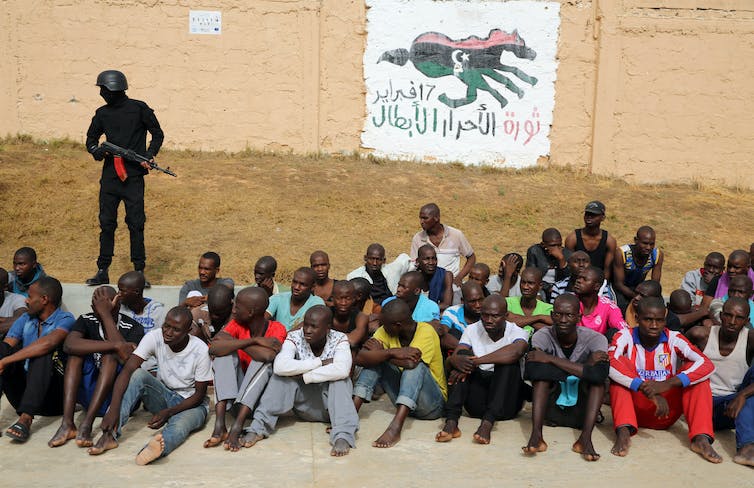 Migrants sit in front of a painted wall during a visit of United Nations’ special visit to the Abu Salim detention centre in Tripoli, Libya on 19 May 2016. EPA/STR

Yet, despite these realities, Libya was the country identified by Macron as a suitable site for “hotspots” in July, and was at the heart of the Paris meetings in late August.

The proposed processing centres are also not the first time the EU has sought the cooperation of Libya’s unstable government to curb the flow of irregular migrants. European Parliament President Antonio Tajani wants EU leaders to set aside €6 billion for Libya so that the war-torn and failing transit country can better limit the irregular movement of refugees and migrants into Europe.

Italy has already been working to train the Libyan coastguard. It is also helping Libyan navy vessels turn back anyone attempting to enter Italy through irregular means.

But such cooperation between Libya and Italy demonstrates the willingness of European states to turn a blind eye to abuse.

There have also been allegations that Italy has financially supported Libyan militia to stop migrants, an accusation that Italy denies.

The fear is that the proposed processing centres may be plagued by similar issues.

Studies show that increasingly restrictive border control policies by the EU have not stopped irregular migration or the access of refugees to countries of asylum. Instead, they have made the journey to Europe more deadly and irregular migrants and refugees more vulnerable to human rights abuse.