For someone who spent her youth living in small towns in regional Australia, Hole were the accessible end of the early 90s feminist moment in rock music (along with L7). And by “accessible”, I mean not sonically, but as something I could access at all. I could read about Bikini Kill in the music magazines at the local newsagents but actually finding their music to listen to was a lot harder.

Hole, and Courtney Love, I already knew, from their earlier album Pretty on the Inside. Live Through This came out in 1994, and was on the one hand, a raw, angry, feminist-inspired, riffy, grunge noise, but on the other, well-produced enough, and with enough hooks and memorable tunes, to stand out from the crowd and get stuck in your head.

The elephant that’s always in the room with this album is the circumstances of its release. It remains almost impossible to disentangle Love’s entire career from her association with Kurt Cobain.

By attaching herself to rock’s man of the moment, having a child with him, and then steadfastly continuing to refuse to behave, Love became the new Yoko Ono, reviled by fans, critics and Dave Grohl alike. Every uniquely gendered insult that could be thought of was directed her way – starfucker, golddigger, he probably writes her songs for her, it’s her fault he’s addicted, and most damningly BAD MOTHER. 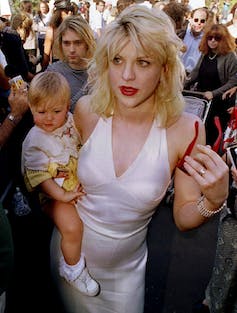 The surprise of Live Through This was its overwhelmingly positive reception in the face of tragedy. Cobain killed himself a week before the album was due to come out. It turned out to be a perfect soundtrack for the grief and disbelief of the Gen X-ers who had just lost their hero.

From the lyrics - which could only be read as rejected attempts to reach out to someone struggling to survive the effects of celebrity – (from Doll Parts: “yeah they really want you, but I do too”) to the title to the perfect way the rage permeating the album intersected with Love’s surprisingly well-received performance of the rock widow, even now it is difficult to disassociate Live Through This from Cobain’s death.

In many ways though, this is unfair. Live Through This is an album I come back to because it is full of well-crafted and super-catchy but angry, biting, songs that – and this is important – I can shout along with when the mood takes me (or, let’s be honest, at karaoke).

Many of the songs on Live Through This show absolute mastery of the grunge “soft-loud-soft” dynamic that was so effective for many of the genres’ best known bands, particularly the opening pair of tracks Violet and Miss World.

The lyrics throughout deal unapologetically with women’s issues, from rape (Asking for It) to motherhood (Plump), even through to Love’s critique of the Riot Grrrl movement in Olympia. Many of the songs are about relationships with other women, including difficult ones, rather than love songs about men.

Courtney was by no means the first woman to create women-centric music, but she was one of the first I came across (small country towns, remember?) That I later tried to start a band was in part thanks to not just Love’s role modelling on Live Through This, but bass player Kirsten Pfaff and drummer Patty Schemel’s. (That I was terrible at it was entirely down to me.)

It is such a good album that I feel confident in saying it would be regarded as a classic even if Cobain was currently trying to make a come-back with a reformed Nirvana after years of dodgy, experimental solo projects.

But as much as judging art purely on its own merits sounds like a nice (if unobtainable) ideal, and as nice as it would be to find a way to assess Hole without having to refer to a man who wasn’t in the band, an appreciation of Live Through This is in some ways enhanced by knowing what the band was up against to create the album.

Love was a woman who not only did the things she wasn’t supposed to do, but kept doing them in the face of whatever fate or other people would throw her way. To say she has always done this with grace and in sensible ways would be lying. But despite everything, she is still a feminist icon to me.

There is still something inspirational in a scrappy, messy, sometimes self-destructive diva who is visibly ageing but also really visibly trying not to age. Because who among us isn’t sometimes a mess, and who can claim they really aren’t just a bit self-conscious about their growing wrinkles? (Especially after being presented with the flawless visages of Beyonce or Gal Gadot as our current crop of feminist icons.)

Hole might not have lived up to the expectations placed on them, but Live Through This still speaks of potential - particularly feminine potential - being unlocked in new and exciting ways.