The existence of high-energy cosmic ray particles bombarding Earth was first discovered in the 1960s, but their origin was a mystery.

Now a paper published today in the journal Science reports that the extremely energetic cosmic ray particles originate from outside our own Milky Way.

For the first time, scientists have conclusive evidence that real matter, nuclei of various chemical elements, is speeding to Earth from other galaxies.

Read more: 3D view helps us to understand how galaxies formed and evolved

Cosmic rays are actually protons and nuclei that barrel through space at speeds almost equal to that of light. First discovered in 1912, the true range of their energies was only realised in the 1960s when some cosmic rays were discovered to have very high energies, as much as a fast-bowled cricket ball packed into an atomic nucleus.

Lower-energy cosmic rays are known to be produced in our Milky Way in powerful events such as supernova explosions.

But it was not known if the rare, highest-energy particles were created in our own galaxy or in distant ones. These particles have energies at least a million times larger than the protons accelerated at the Large Hadron Collider in Europe.

The new discovery was made with the help of the Pierre Auger Observatory that covers 3,000 square kilometres at the base of the Andes in western Argentina. It has mapped the arrival directions of more than 30,000 of the most energetic cosmic rays.

We found that the arrival rate of cosmic rays is 6% greater from one side of the sky than from the opposite direction, with the excess lying well away from the plane of the Milky Way and its centre.

It seems that our galaxy does not contain the sort of extreme environments capable of producing the highes-energy particles.

The Auger observatory is almost as large as Kangaroo Island (off the South Australia coast), and needs to be huge because these cosmic rays arrive at a rate of only one per square kilometre per year.

The observatory takes advantage of huge cascades of subatomic particles initiated by an energetic cosmic ray colliding with the Earth’s atmosphere. A single cascade, or “air shower”, contains upwards of 10 billion particles in a disk-like swarm several kilometres wide.

At ground level the cascade can be seen by an array of 1,600 particle detectors distributed over the observatory. At night, a series of large telescopes view the faint blue light emitted by the cascade in our atmosphere.

Both techniques accurately measure the arrival direction and the energy of the original cosmic ray particle.

This large observatory is operated by a huge international team - 400 scientists from 18 countries, including a group of 16 physicists from the University of Adelaide. (Adelaide actually hosted the first planning workshop for the observatory 25 years ago.)

It began taking data in 2004, with the University of Adelaide taking the lead in several areas, by finding the best ways of measuring the cosmic ray energies and directions, and co-leading studies of the nature (mass and charge) of the cosmic rays.

The search for sources

Conventional wisdom during the planning for the Auger observatory was that the highest-energy cosmic rays would be protons, nuclei of hydrogen atoms.

Instead, one of the experiment’s major discoveries a few years ago was that the particles are a mixture of protons and heavier nuclei. Since nuclei are charged particles, and since magnetic fields fill the universe, the paths of cosmic rays are bent during their propagation to Earth. This complicates the search for cosmic ray sources.

Given these facts, the result published today is all the more remarkable. The pattern of the 30,000 arrival directions on the sky is uneven, and significantly so.

Such an uneven sky map could arise by chance from an underlying uniform distribution, but only with a likelihood of 1 in 5 million. The excess is well away from the directions of the Milky Way plane and centre, and in a direction where the density of other galaxies is relatively high.

Although this discovery demonstrates an origin outside the Milky Way, the actual sources have yet to be pinned down. The direction of the excess points to a broad area of sky rather than to specific galaxies, as even particles as energetic as these are typically deflected by a few tens of degrees in the magnetic field of our galaxy.

The source galaxies must be more extreme than our own. Candidates include galaxies with active central supermassive black holes, or pairs of galaxies in collision. 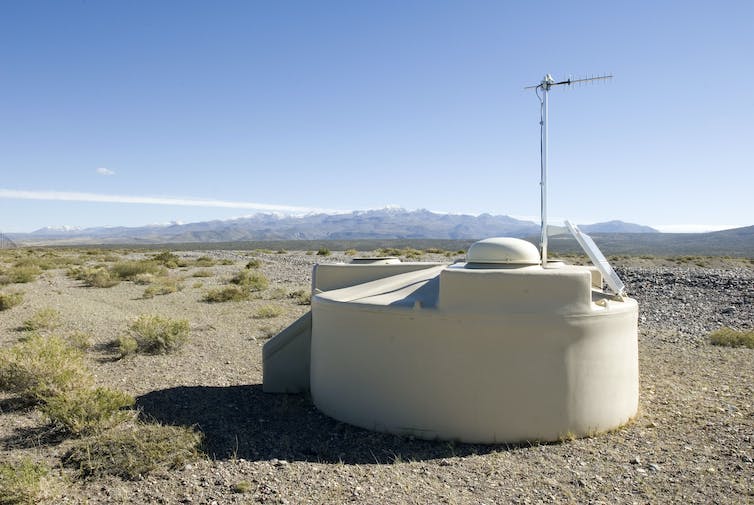 The Auger observatory is undergoing a major upgrade to be completed in 2018. Currently it can only identify the cosmic ray mass with its optical telescopes (which operate 15% of the time).

The upgrade will arm the surface array with the ability to measure mass 24 hours per day. The plan is to use this new capability to select extremely energetic proton cosmic rays, those with expected magnetic deflections of less than a few degrees.

Then we will have a real chance of identifying which galaxies, or class of galaxy, are responsible for producing the most energetic particles known in the universe.