One of the greatest mysteries in life is why only about one in three embryos formed naturally ever go on to produce a baby. Most miscarry. By genetically engineering human embryos, scientists in the UK have identified a key gene in enabling embryos to develop.

Kathy Niakan, of the Francis Crick Institute in London, led a team which used gene editing technique CRISPR to investigate the role of a particular gene in the development of embryos. The study could potentially lead to better understanding of miscarriage, and hopefully prevention of it, and improve treatment of infertility.

However, this ground-breaking research would be illegal in Australia. Scientists doing this in Australia could be imprisoned. It’s time to review Australia’s laws in this area, which are 15 years old.

What did the study accomplish?

Many aspects of early human development are still a mystery. Our bodies are composed of over 200 cell types, including different types of skin cells, blood cells and muscle cells. But we all start as a single cell – called a zygote. As we grow our cells become more and more specialised, and this process is poorly understood – particularly at the very earliest stages of life.

Niakan’s team showed that one particular gene, “OCT4”, plays a key role. They used the CRISPR-CAS9 system – which allows researchers to make precise changes to DNA sequences - to turn off the OCT4 gene in zygotes. These zygotes were donated by couples who had some left over after fertility treatment.

With OCT4 turned off, the cells of the embryo failed to mature into other cell types, showing that OCT4 is required for normal embryo development. The study suggests that OCT4 acts as a regulatory gene, controlling the expression of other genes which cause cells to mature into distinct types.

Why is the study significant?

The study is significant for two reasons. First, it’s the only study involving genetically engineered human embryos that has been officially sanctioned by a regulatory body.

The UK’s Human Fertilisation and Embryology Authority gave the green light for Niakan’s project last year. All previous studies using human embryos have been performed in China or the USA. China has no federal legislation governing embryo research, whereas the USA has no legislation that covers privately funded research.

Five reasons we should embrace gene-editing research on human embryos

Now we can edit life itself, we need to ask how we should use such technology

Second, it was the first study to use CRISPR-CAS9 to study human development. The four previous studies that have used CRISPR on human embryos have attempted to correct mutations that cause diseases. Such research may suggest ways in which gene editing could one day be used to avoid genetic disease in children.

But such research is, at the very least, premature. Most experts agree gene editing science is far too immature for us to be thinking about reproductive applications in humans. But the technique can today be fruitfully used to study development, as the Niakan study shows.

CRISPR-CAS9 is a novel way to study human development and uncover the mechanisms important in embryo development. Such research is significant for its own sake, but may also have important clinical applications.

Two-thirds of all human embryos fail to develop successfully. We have a poor understanding of why this is. Increasing our understanding of human development may suggest ways to reduce embryo loss and improve IVF success rates.

Despite the success of this UK study, this research couldn’t be conducted in Australia. Australia has one of the strictest regulatory environments for gene editing research in the world. Australia’s Prohibition of Human Cloning Act (2002) makes altering the genomes of embryonic cells illegal. If Kathy Niakan’s team had performed their study in Australia, they would face 15 years in jail. 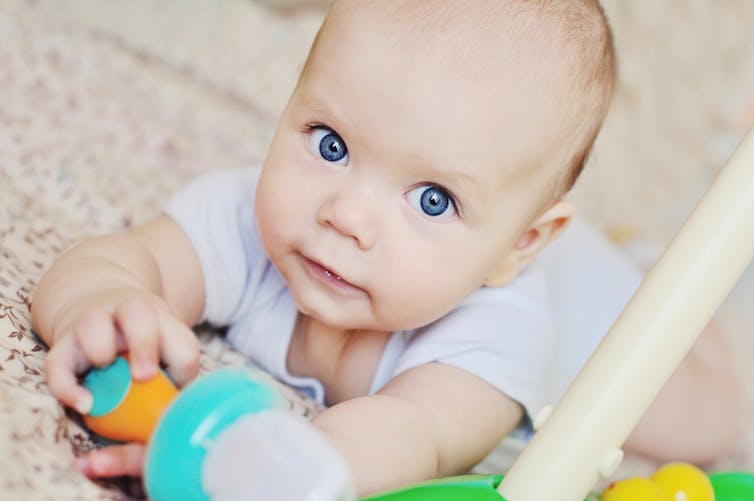 Concerns have been raised gene editing will be used to pick the gender, hair and eye colour of babies. from www.shutterstock.com

This law, and the punishment that comes with it, are difficult to justify. Australia already allows research using human embryos to study development. Such research is permitted if:

1) the embryos are never implanted into a woman

2) the embryos are destroyed within 14 days of development

3) the research is performed on embryos that have been created for use in IVF, but are no longer needed for that purpose

4) the research is performed on embryos whose parents consent for them to be used in research.

It’s difficult to see why simply using a different technique to study embryo development, that also meets these conditions, is not only banned but punishable by serious jail time. In the UK, the law permits researchers to alter the genome of embryos, provided such embryos are not allowed to develop beyond 14 days.

Why are Australian laws so restrictive?

Many are worried about the long-term implications of such gene editing research, and claim it sets us on a path to “designer” babies. But in the UK where the Nikian study was performed, the laws make a distinction between the research and reproductive applications of gene editing.

The laws that ban gene editing for research purposes in Australia were first established 15 years ago, in a different era of biotechnologies. Genetic engineering technologies at that time were crude and imprecise. However, technologies have changed vastly since this time, and it’s time for our laws to change as well. Australia should allow gene editing for research, and help solve the mysteries of early human development.