We’re all afraid of a time when we might lose the capacity to decide what medical treatments to accept or refuse. This is why Australian governments have promoted advance care planning, which involves discussing and expressing preferences about the kind of medical care you would or would not want in a situation where you lack mental capacity to make decisions.

Writing an advance care directive is part of the planning process, but a directive means the person’s preferences are bound to be followed by law. All states and territories have varying laws enabling adults to make advance care plans or directives. In Victoria, new legislation will come into effect in March 2018, creating clear obligations for health practitioners to respect advance directives.

A globally unique aspect of Victoria’s Medical Treatment Planning and Decisions Act 2016 is that it allows children to make advance directives. In the Netherlands, children aged 12 and over can make advance decisions requesting euthanasia if their parents give consent. Advance directives in palliative care have also been used in the United States, but these have no legal authority, merely the status of “moral persuasion”.

Read more: What you need to know about advance care directives

In Victoria there will be no age limit, so anyone can set out a directive as long as they are competent to do so. This means a person can understand the nature of the treatment they are making decisions about and the potential outcomes if the advance care directive is followed.

At first glance, it may seem irresponsible to give children the power over their future medical treatments, which in many cases are a matter of life and death. But respecting the autonomy of young people in their health-care choices is important. It encourages their engagement with treatment, gives voice to their values and provides a sense of empowerment at a time where illness can diminish their control of events.

While teenagers are more likely to engage in risk-taking behaviour and be swayed by the views of their friends, this is less likely to affect their decisions about treatment in hospital. A recent study showed that children aged around 12 have the competence to make medical decisions. But of course this depends on the type of decision being made.

A decision involving risky and complex treatment would require a high level of competence. Yet children with terminal and chronic illnesses will know a great deal about their illnesses and the impact of treatment. In 2008, a 13-year-old English girl refused to consent to a heart transplant after enduring six operations in two years. She showed her case officer and the hospital that she could make an informed decision and had weighed up the risks of the surgery and potential benefits (although she later changed her mind). 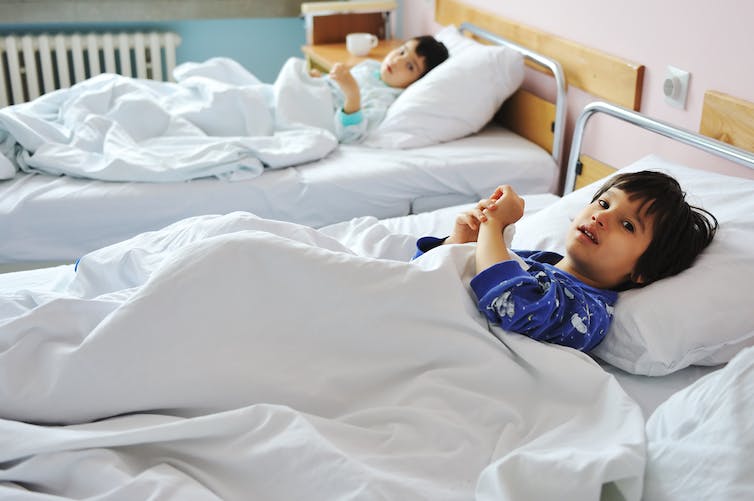 Children with terminal and chronic illnesses will know a great deal about their illnesses and the impact of treatment. from shutterstock.com

We might consider it appropriate to protect young people from making choices considered harmful and against their best interests. Ethical dilemmas usually come about where children do not go along with what doctors propose. Courts have overruled decisions of competent minors to refuse treatment in cases where this refusal would lead to permanent disability or death.

For instance, in Sydney a 17-year-old boy refused to receive blood transfusions because of his beliefs as a Jehovah’s Witness. The judge overruled the child’s decision after having considered preserving his life was was more powerful than respect for the boy’s faith.

A similar case occurred in England in 1993. Here, a 15-year-old boy, whom the judge described as “intelligent”, refused a blood transfusion as part of treatment for leukaemia for religious reasons. The judge deemed him incompetent to make such a decision because the boy couldn’t understand the pain he would suffer, the fear of dying, and distress caused to his family.

Read more: When parents disagree with doctors on a child’s treatment, who should have the final say?

Victoria’s new laws will mean that decisions taken before capacity is lost must be followed, so the directive can’t be overruled. But there are safeguards in place and strict requirements for an advance care directive.

It must be written in English, signed and witnessed. At least one of the witnesses must be a medical practitioner who must certify the person appears to have decision-making capacity and understands the effect of statements made. In the case of a child, the medical practitioner can help them appreciate the implications of the advance directive and ensure it is consistent and practically applicable.

Advance directives can be made for any future treatment, not just situations where the person is terminally ill or has a condition likely to shorten their life. However, it is likely that minors will write advance directives to inform their end-of-life care.

An advance directive comes into effect when the child becomes unable to make decisions as a result of their illness. The Victorian legislation provides if a child has made a valid advance directive in which they have included instructions to refuse a particular medical treatment, such as dialysis or chemotherapy, a health practitioner must not provide that treatment.

The prior autonomous wish of the child is respected, even though those treating him may not believe that decision is in his best interests.

The Act also allows for a values directive, which is different to an instructional one. The values directive records a person’s preferences and values for future treatment. A young person diagnosed with cancer may place more importance on remaining quality of life and dignified death than enduring painful treatment. A values directive will mean the medical treatment decision maker will be required to consider treatment based on the patient’s values.

Parents want to protect their children and health-care practitioners want to do the best for their patients. Advance directives should be drafted as a collaboration between the child, health professionals and, ideally, parents. This will enable understanding of the possible treatment options, their benefits and harms, and the impact of refusing certain treatment, resulting in a meaningful and effective advance decision.