This week’s ABC Four Corners episode investigated contamination at defence force sites and surrounding aquifers with chemicals called perfluoroalkyl acids or PFAAs. Around 18 sites are reported to be affected, with the concern being the PFAAs have entered groundwater and contaminated water used for drinking, cleaning and watering plants for human consumption.

PFAAs include compounds such as perfluorooctanoic acid (PFOA) and perfluorooctane sulfonate (PFOS), which have been used in a wide variety of applications. In the case of the defence force, the application was in firefighting foams. These contained large quantities of PFFAs which then entered the soil and stormwater drains.

PFAAs are persistent organic pollutants which are not readily broken down and can accumulate in the environment including in food, although most people are exposed to PFAAs from drinking water. Once in the body, these compounds persist for a long time. For instance, it takes around five years for half of an ingested dose of PFOA to be removed. So, these compounds have the potential to reach levels which can affect our health.

As a result the use of these compounds started to be phased out in 2000, although the defence department did not completely replace the PFAA firefighting foams until 2012. While PFAAs are ubiquitous in the environment, data from the US National Report on Human Exposure to Environmental Chemicals shows their levels have consistently fallen in line with the phase-out of their use.

There are several potential health concerns. The Persistent Organic Pollutants Review Committee to the Stockholm Convention listed PFOA and PFOS as persistent organic pollutants, linking them to six human diseases. These include cancer, low birth-weight, effects on the heart and blood vessels and on the immune system. But what does “linking” actually mean and how strong is the evidence? 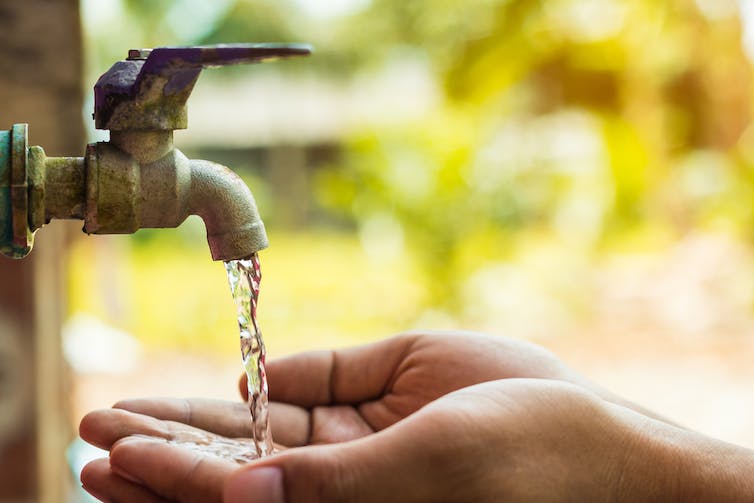 The concern is that PFAA chemicals have seeped into the ground and drinking water. from shutterstock.com

How strong is the evidence?

The evidence comes from animal studies, human community studies, and studies of industrial workers exposed to high environmental levels. The strength of the evidence depends on a number of factors.

There is presumptive evidence that PFFAs could have health effects. PFFAs (particularly PFOA and PFOS) bind to a class of receptors for fats called peroxisome proliferator receptors. These can alter fat metabolism, and potentially have effects on heart function and foetal development.

This is the risk most people are worried about, and there is good evidence in rats long-term exposure to high levels of PFOA induces benign liver tumours (called adenomas), Leydig cell adenomas (tumours associated with ovaries and testes), rare types of pancreatic tumors (called acinar cell tumours), and that PFOS also induces liver adenomas. But the relevance of this evidence to humans is limited.

It’s important to note activation of peroxisome proliferation receptors plays a role in these actions, and the lower responsiveness of these receptors activated in rodents are not present in humans.

A recent review of all the available epidemiological (exploring incidence across populations) studies, including community and worker exposure, of the association between PFAAs and cancer found studies were inconsistent in terms of both degree of exposure, dose-response and site of cancer. One study found exposure to PFOA decreased the incidence of bowel cancer. Overall the review noted:

Taken together, the epidemiological evidence does not support the hypothesis of a causal association between PFOA or PFOS exposure and cancer in humans.

As with cancer, there is reasonable evidence PFAA exposure in animals produces low birth weight. However, the concentrations animals were exposed to were 100-1000 times greater than high human exposure.

Despite some early suggestive studies, more comprehensive human epidemiological studies have failed to find significant effects on birth weight, birth outcomes or growth and development to at least seven years of age.

It is also unlikely there is any causal relationship between PFAA exposure and fertility.

Some epidemiological studies suggested there may be an association between PFAAs and cardiovascular disease. Again, these are limited by the possible interference of other lifestyle factors, one-time measurements of PFAAs which may not reflect overall exposure, and limitations in how cardiovascular disease was reported. Overall whether PFAAs cause cardiovasular disease is not well established.

You can see a pattern here. Animal models exposed to high levels of PFAAs have suggestive indications of disease, but evidence in the exposed human population is equivocal or negative. This is true for several proposed effects, such as immune system dysfunction.

I previously discussed a cardiovascular study here and an immune system study cited in the Four Corners report here.

While hard evidence of PFAAs and significant human disease is elusive, we should not be cavalier about the risk and try to minimise our exposure to them as a matter of course.

This is where the Four Corners report is important. Even if the risks are low, they have been placed on people who rely on the aquifers without their consent.

Th information provided to affected consumers has been inconsistent as well. A reported statement by a defence employee that “[PFAAs are] the new asbestos” was unnecessarily alarmist, given what we know about the risk. However, in their tardiness in informing the public, the defence department has damaged, potentially irretrievably, any trust in statements they make.

It is hard to find concrete values for the levels of contamination in various aquifers in question. While some areas exceed the current safety values, trying to estimate the risk to people exposed is difficult.

The reference consumption values have built-in safety margins, typically 50 times lower than the levels that have no effect in animals, which as we have seen, overestimate cancer risk in humans. Several sites appear to be within the margin of safety, but others appear to be well outside the 50-times margin.

But really, that is beside the point. Regardless of the risk, residents should have been informed in a timely manner of the contamination. As a result of the department’s reticence and anodyne statements about health, residents are unnecessarily alarmed and will have lost trust in any health messages.