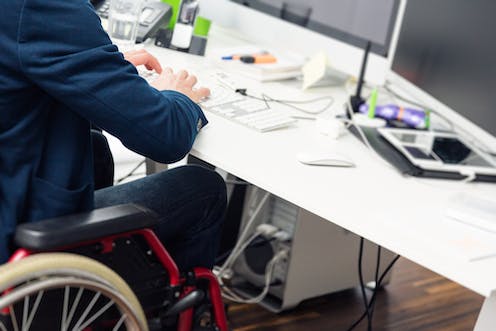 Only 53% of Australians with disability are employed, compared to 83% of all working-age people. Australia ranks 21st out of 29 OECD nations when it comes to employment rates for people with a disability.

But looking at the data reveals an even darker story – complaints about disability discrimination are the largest category of discrimination reported to the Australian Human Rights Commission (AHRC), and the numbers have been steady for around 20 years.

Lower employment levels translate into Australians with disability living in poverty at the highest rates in the OECD.

The Australian Bureau of Statistics also found that the employment rates vary radically depending upon the “disability type”. Those who have a “psychological disability”, for example, have the lowest employment rate at 29%.

Employment also varies by “disability severity” (defined as mild, moderate, severe and profound). Employment decreases as severity increases. Only 26% of people with profound or severe physical disability are employed.

The next chart shows the proportion of disability discrimination complaints that relate to the workplace. This is approximately 35% from the latest figures but has peaked at a much higher rate.

While we can’t explain the fluctuation, at various times there have been changes to the system, cuts in funding and political tensions. What can be interpreted from the figures is that disability discrimination has been sustained and ongoing over the two decades.

In our research, using publicly available complaint case summaries, we found that employers incorrectly assumed that the costs of employing people with disability were higher than they are, or were unaware of government programs to offset the costs of reasonable adjustments in the workplace. In other cases, people were discriminated against by the strict adherence to guidelines and policies.

We found several distinctive themes in the disability complaints made.

For instance, many employers do not provide adequate access to the workplace. This could be as simple as tactile ground surfaces for people who are blind. Many cases also involved managers, or human resource procedures, being too quick to dismiss an employee who acquired a disability. Reasonable adjustments can often be made to the position descriptions.

Hiring practices were often biased and discounted the abilities of applicants (otherwise known as unconscious bias). In many cases, workplaces were not inclusive of assistive technologies, such as screen reading software or hearing loops. These would have allowed employees with a disability to do their job.

Mental health complaints have doubled in prevalence over time suggesting the dynamic nature of disability discrimination and the willingness of those with mental health issues to disclose their disability who previously may not have instigated a complaint case.

In reading the summaries of the complaints to the AHRC, it is apparent that employers, co-workers and third-party organisations (e.g. insurance companies) directly or indirectly treat people unfairly, or, in the worst cases, display open hostility to Australians with a disability.

Some may argue that Australians with severe levels of disability would be unable to work. But their experiences show that, with the correct assistive technology and attitudes that focus on ability rather than disability, employment is not just possible but imperative.

A recent OECD report singled out Denmark and Switzerland for their targeted intervention for younger people with disability or medical conditions. This ensures they have the highest chances of being employed rather than becoming welfare-dependent.

The foundation of the National Disability Insurance Scheme shows the government’s desire to give people with disability the opportunity to move from welfare to employment. While we wait for the major policy change to take effect, other immediate options are available to bring about positive social change.

Positive exposure in the media (see Attitude Foundation), personal contact and education could change attitudes to disability. The government and non-profit organisations have a multitude of resources available for businesses, to raise awareness about best practice and inclusive assistance.

One good resource is Job Access. This government site provides education and resources to assist with workplace adjustment. It also provides direct assistance to people with disability.

Other organisations like the Australian Network on Disability can help businesses to become strategically more inclusive. In the end it will come down to employers giving every Australian job seeker with disability a fair go and not judging “what I can do by what you think I can’t”.