Natural disasters are becoming more frequent and intense. Recent hurricanes, floods, bushfires and earthquakes have highlighted the significant potential for mass trauma. Yet we know relatively little about the psychology of decision-making in dangerous conditions.

The focus of this year’s International Day for Disaster Reduction, October 13, is the second target in the United Nations’ Sendai Framework: reducing the number of people affected by disasters by 2030. To achieve this, governments and organisations must work with communities to ensure effective disaster preparedness and response.

Evacuation is a key strategy for keeping city residents safe. Yet our study, conducted in Hong Kong and recently published in The International Journal of Public Health, identifies several barriers to evacuation in high-density cities. Importantly, psychological factors could affect decision-making in these situations.

The combination of climate change and increasingly urbanised populations has elevated the risk of large and complex natural disasters for cities.

Hong Kong is predicted to be at significant risk of a climatic disaster in the next ten years. Despite this, in our city-wide assessment, only 11% of residents surveyed reported feeling prepared to respond to a natural disaster.

Timely evacuation in emergencies can be critical for survival. It ensures vulnerable members of society are safe and have access to medical and social support.

However, people are not always willing and able to leave their homes. In our study, two out of every five people identified a reason that would stop them evacuating.

The most commonly reported barrier was not knowing where to go. A smaller proportion reported disability or mobility issues that limited their capacity to evacuate quickly. This is particularly important for older people, families with young children, and residents of high-rise buildings. Others were concerned about theft and looting should they leave their homes.

Similar studies from Australia, Japan, and the United States suggest these barriers are not limited to Hong Kong. 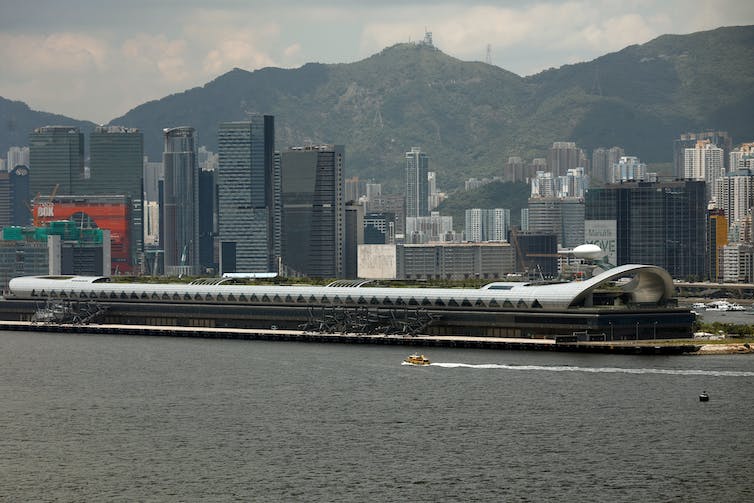 Hong Kong is predicted to face significant threat of a climatic disaster in the next ten years, but barely one in ten residents feel prepared. Tyrone Siu/Reuters

How does psychology come into it?

To respond adequately to an emergency, people must believe their actions will be effective.

While disaster information is often communicated objectively (for example, the prediction of a bushfire’s speed and direction), we interpret these messages in light of our experiences and circumstances. Once we recognise the presence of a threat, we are then able to implement strategies to reduce the risk of harm.

Self-efficacy – the feeling of being able to exert control over difficulties that arise – is likely to play a crucial role in how we decide to evacuate. Psychological models suggest that motivation factors, such as our awareness of hazards, risk perception and anxiety levels, interact with our sense of self-efficacy as central factors in decision-making.

In our study, people who reported higher levels of self-efficacy were less likely to report barriers to evacuation. This appears to be a simple relationship: if you have strong coping skills, you are more likely to feel ready to evacuate.

However, in a complex disaster that compromises critical infrastructure – such as the destruction of Puerto Rico’s electrical grid during Hurricane Maria – strong individual self-efficacy will not be enough.

The success of response and rescue efforts will depend not only on individual drive, but also on strategic and timely actions from both within and outside the affected populations. Government action and international aid remain vital.

Early warnings are, of course, necessary for effective evacuation. Emerging technologies have created a rapidly changing environment for warning information.

Almost half of the 1,000 residents we interviewed said their main source of disaster preparedness information would be the internet, followed by TV. People expect information in real time. And, to get this, they will actively participate online – uploading, sharing, analysing and organising information.

Social media have provided new avenues for communicating with the public. Yet the high volume of messages that arise before and during disasters can be difficult to manage.

When Hurricane Sandy hit New York in 2012, 20 million tweets were posted in six days. As the storm worsened it became difficult to sort through the vast range of tweets to find action-specific information.

Effective decision-making depends on reliable, timely and trusted information being available. As we move toward increasingly virtual means of communication, we must determine the optimal strategies for empowering communities to take the safest course of action.

It is critical during evacuation that governments clearly communicate routes to safety, timing of departure, and options for less-mobile people. Using popular social media to provide accurate, real-time information will increase coverage.

At a local level, many communities are actively preparing. In Australia, government and non-government agencies, including the Red Cross, are implementing programs to ensure disaster-prone communities are ready to respond. Many schools have rolled out disaster training for students, who are often the most effective communicators of household disaster-preparedness strategies.

Psychology holds the key to evacuation decision-making. It is time we used it to inform our strategies for reducing disaster risk.