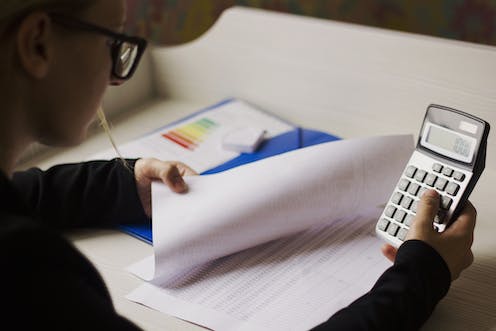 The federal government’s return to a budgetary surplus by 2020/21 will mainly be due to a projected increase in personal income tax revenue, according to a report from the Parliamentary Budget Office (PBO).

The PBO modelling shows that people in the middle of the income spectrum will bear the brunt of this, due to bracket creep. This occurs when tax thresholds (including the tax free threshold) stay constant while income grows due to inflation.

Read more: How market forces and weakened institutions are keeping our wages low

The fundamental assumption driving the PBO projections is nominal (not adjusted for inflation) income growth of between 4% and 5%. This consistutes 2% to 2.5% annual inflation and 2.5% to 3% percent annual increase in real income.

The difference between nominal and real incomes is important as it is increases in real income (adjusted for inflation) that result in higher standards of living. But taxes are levied on our nominal incomes, regardless of inflation. Because of this difference, bracket creep means that real incomes after tax (otherwise known as disposable income) will actually fall.

What the PBO report projects

To calculate how much tax we will be paying in the future, the PBO first makes assumptions about inflation and real earnings growth and uses these to project individual incomes. Current income tax rates are then applied to these projected incomes, and the increased amount paid by each individual is added together.

According to the PBO’s modelling, the average individual tax rate will increase by 2.3% from 2017–18 to 2021–22. And every income group will see their tax rates increase over this period.

Meanwhile, those in the second lowest and two highest income quintiles are expected to see their average tax rate rise between 1.9% and 2.5%. The average tax rate for individuals in the lowest income group is projected to rise by only 0.2%, as most of their income remains below the tax free threshold.

The increases in average tax rates are even greater if a comparison is made with 2016/17, the latest year for which individuals have been paying tax. As you can see in the previous chart, when compared to 2016/17, individuals in the middle income quintile will see their average tax rate rise by 3.8%.

As you can see, the largest burden of the tax brack creep will fall on “average Australians”. This is because they will see their nominal (before adjusting for inflation) incomes rise. Typically, the lowest income earners do not earn enough to get above the tax free threshold and the highest income earners already pay a large portion of their tax at the top marginal rates.

Because of increasing inflation and wage growth, the Parliamentary Budget Office projects that even the lowest income earners will be liable to pay income tax by 2019/20.

The 2% to 2.5% inflation assumed in PBO’s forecast is in the mid-point of the Reserve Bank’s target range of 2% to 3%, so this is not entirely unreasonable assumption.

But both PBO’s inflation and wage growth (2.5% to 3%) assumptions are currently way above the levels seen in the economy. According to the ABS annual inflation currently stands at just 1.8%, and the earnings of all Australian employees is growing at 1.6% per annum.

The reasons for persistent low inflation, not just in Australia but in most other industrialised countries, are not well understood or agreed upon.

And a number of theories have been put forward to explain low real wage growth including, the degree of underemployment, reduced job security, declining bargaining power of unions and increased potential competition, either from advances in technology or from international competition.

But regardless of the reasons for the persistently laggard growth in wages and inflation, there are also no signs that these rates will rise significantly any time soon, let alone to the levels assumed by the PBO.

Given the information contained in the PBO report we can’t calculate exactly what the impact of these tax increases will be for individuals.

However, it is clear that if the current wage and price conditions persist the actual tax revenue will fall way short of the projected figures for all years up to and including 2021/22 and make a Budget balance even further off.

We can also make some extrapolations based on averages. As a simple example, consider someone on an annual income of A$84,000 in 2017/18 (which is around the current average earnings in Australia). Under the assumption that nominal incomes increase by only 2% per year, the tax paid (including Medicare levy) in 2020/21 would be A$23,158.

That is, tax collected from this individual would be 12% less under a low growth scenario than under the PBO’s more optimistic scenario. In the years 2018/19 and 2019/20 the tax collected would be respectively 4% and 8% less. This illustrates how precarious the projection of a balanced Budget in 2020/21 is.

Whatever the outcome, it is for certain that income earners will see any nominal increases eroded not just by inflation, but also through bracket creep.