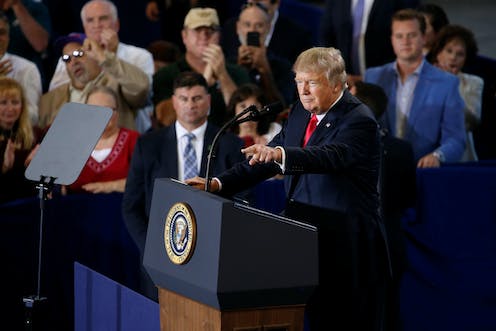 Who are the people who make up US President Donald Trump’s base? They are the loyalists who not only supported and voted for him, but also seem impervious to his more outrageous scandals. It’s those who continue to strongly approve of his performance despite his failure to get signature policies through Congress, his support for white supremacists in Charlottesville, and who probably won’t abandon him despite his scandalous neglect of Puerto Rico in the aftermath of Hurricane Maria.

A recent article claiming that Trump was on track to win the 2020 presidential election has once again focused attention on that elusive group of voters who remain loyal to him despite everything and will provide the cornerstone of any re-election strategy.

Further reading: All the lessons Donald Trump has taught us

There is, however, something interesting happening with Trump’s approval ratings. While they have been consistently low, currently sitting at around 37%, his base – that 20-25% – has consistently “strongly approved” of his performance.

That figure has experienced two sharp declines – each one after Trump’s failure to reform health care. Trump can’t win a general election without appealing to those beyond this base, but digging deeper into the polling to understand those who still strongly support him can tell us something about the divisions in the US and what drives his behaviour.

The FiveThirtyEight website conducted a fine-grained analysis of voting by county not long after the election. It found that a voter’s level of education was the greatest indicator of whether or not they would be likely to vote for Trump. This is particularly interesting given the earlier analysis on cultural anxiety and race relations in America.

Yet in interviews with Trump supporters in rural Colorado, it was clear that economic and cultural anxiety were intertwined with feelings of exclusion and resentment towards those who lived in large cities, and were perceived to be benefiting economically in ways that they weren’t.

The fact that the partisan divide in the US is also reflected in the country’s geography is not particularly new. Rural America has traditionally voted conservative. But the overwhelming support for Trump in 2016 has focused greater attention on the ways in which this geographical divide also reflects a deep cleavage in identity and values.

Cultural anxiety can mean a lot of different things to different people, but there is also important evidence that in 2016, both racism and sexism played a key role in some people’s perceptions of the two presidential candidates.

The cultural anxiety argument is very much about race and identity, and perceptions of inclusion and exclusion.

Research conducted by the Public Religion Research Institute and The Atlantic found that when controlling for demographic variables, three factors stood out that are key in understanding what drives Republican white, working-class anxieties: cultural change, immigration, and valuing higher education.

The analysis explored the ways in which these particular voters reported feeling like strangers in their own country. They write:

Nearly seven in ten (68%) white working-class Americans – along with a majority (55%) of the public overall – [believe] the US is in danger of losing its culture and identity.

These people were more likely to support stricter immigration controls, but not necessarily deportation. They fear foreign influence on American culture, and are far less likely to believe that higher education was a good investment.

So what does this tell us about Trump’s base, and whether or not he will still occupy the White House post-2020?

I’m not sure we can ever disentangle the myriad factors that inspire people to turn out on Election Day and cast their vote for a particular candidate. As the more in-depth reporting has shown, the individuals who we divide into groups based on age, gender, education level and income are invariably more complex and diverse than any survey can possibly show.

However, we can discern important patterns in how Americans identify, and the issues they feel most strongly about. We know the country is increasingly divided along ideological lines. Recent polling shows that Republicans and Democrats have become even more sharply divided on issues to do with government, race, immigration, national security, and environmental protection.

Trump’s political strategy has so far sought to exacerbate these divisions. Health care, immigration, and economic security, as well as identity and a sense of exclusion, will probably continue to be the issues that his voters care most about.

Whether or not his continued failure to tackle those concerns will cost him his base is an open question. What is unlikely to change, however, are the deep divisions within American society – and that has seriously worrying implications for the health of American democracy.