Thunderstorms are set to become more intense throughout the tropics and subtropics this century as a result of climate change, according to new research.

Thunderstorms are among nature’s most spectacular phenomena, producing lightning, heavy rainfall, and sometimes awe-inspiring cloud formations. But they also have a range of important impacts on humans and ecosystems.

For instance, lightning produced by thunderstorms is an important trigger for bushfires globally, while the hailstorm that hit Sydney in April 1999 remains Australia’s costliest ever natural disaster.

Read more: To understand how storms batter Australia, we need a fresh deluge of data

Given the damage caused by thunderstorms in Australia and around the world, it is important to ask whether they will grow in frequency and intensity as the planet warms.

Our main tools for answering such questions are global climate models – mathematical descriptions of the Earth system that attempt to account for the important physical processes governing the climate. But global climate models are not fine-scaled enough to simulate individual thunderstorms, which are typically only a few kilometres across.

But the models can tell us about the ingredients that increase or decrease the power of thunderstorms.

Brewing up a storm

Thunderstorms represent the dramatic release of energy stored in the atmosphere. One measure of this stored energy is called “convective available potential energy”, or CAPE. The higher the CAPE, the more energy is available to power updrafts in clouds. Fast updrafts move ice particles in the cold, upper regions of a thunderstorm rapidly upward and downward through the storm. This helps to separate negatively and positively charged particles in the cloud and eventually leads to lightning strikes.

To create thunderstorms that cause damaging wind or hail, often referred to as severe thunderstorms, a second factor is also required. This is called “vertical wind shear”, and it is a measure of the changes in wind speed and direction as you rise through the atmosphere. Vertical wind shear helps to organise thunderstorms so that their updrafts and downdrafts become physically separated. This prevents the downdraft from cutting off the energy source of the thunderstorm, allowing the storm to persist for longer.

My research, carried out with US colleagues and published today in Proceedings of the National Academy of Sciences, does just that. We examined changes in the energy available to thunderstorms across the tropics and subtropics in 12 global climate models under a “business as usual” scenario for greenhouse gas emissions.

In every model, days with high values of CAPE grew more frequent, and CAPE values rose in response to global warming. This was the case for almost every region of the tropics and subtropics.

These simulations predict that this century will bring a marked increase in the frequency of conditions that favour severe thunderstorms, unless greenhouse emissions can be significantly reduced. 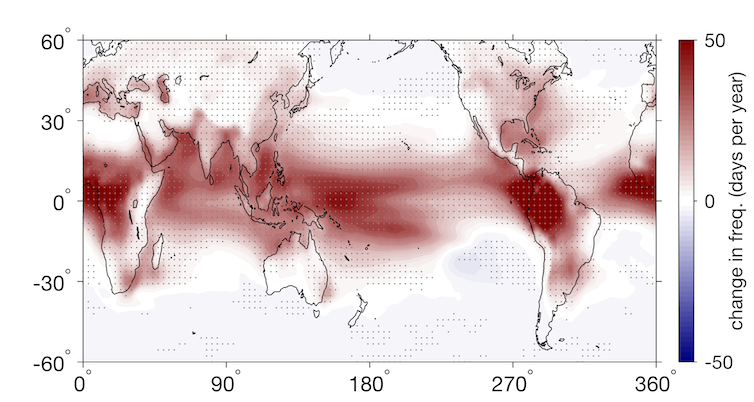 Change in frequency (in days per year) of favourable conditions for severe thunderstorms for 2081-2100, compared with 1981-2000 averaged across 12 climate models under the RCP8.5 greenhouse-gas concentration scenario. Stippling indicates regions where 11 of the 12 models agree on the sign of the change. CREDIT, Author provided

Previous studies have made similar predictions for severe thunderstorms in eastern Australia and the United States. But ours is the first to study the tropics and subtropics as a whole, a region that is characterised by some of the most powerful thunderstorms on Earth.

What drives the increased energy?

Different climate models, constructed by different research groups around the world, all agree that global warming will increase the energy available to thunderstorms – a prediction underlined by our new research. But we need to understand why this happens, so as to be sure that the effect is real and not a product of faulty model assumptions.

My colleagues and I previously proposed that high levels of CAPE can develop in the tropics as a result of the turbulent mixing that occurs when clouds draw in air from their surroundings. This mixing prevents the atmosphere from dissipating the available energy too quickly. Instead, the energy builds up for longer and is released in less frequent but more intense storms.

As the climate warms, the amount of water vapour required for cloud formation increases. This is the result of a well-known thermodynamic relationship called the Clausius-Clapeyron relation. In a warmer climate this means the difference in the humidity between the clouds and their surroundings becomes larger. As a result, the mixing mechanism becomes more efficient in building up the available energy. This, we argue, accounts for the increase in CAPE seen in our model simulations.

In our new study, we tested this idea in a global climate model by artificially increasing the strength of the mixing between clouds and their surroundings. As expected, this change produced a large increase in the energy available to thunderstorms in our model.

Another prediction of our hypothesis is that days with both high values of CAPE and heavy precipitation tend to occur when the atmosphere is least humid in its middle levels (at altitudes of a few kilometres). Using real data from weather balloons, we confirmed that this is the case across the tropics and subtropics.

What this means for future thunderstorms

The models predict that the energy available for thunderstorms will increase as the Earth warms. But how much more intense will storms actually become as a result?

The answer to that question is currently uncertain, and answering it is the next job for me, and other researchers around the world.

But it is clear that through our continued greenhouse gas emissions, we are increasing the fuel available to the strongest thunderstorms. Exactly how much stronger our future thunderstorms will ultimately become remains to be seen.