The 1970s was a decade of political agitation, when activism won women a range of legal and cultural freedoms, from no-fault divorce to work rights to escaping the “ladies’ lounge” in pubs. One little acknowledged aspect of feminist history at this time is the demographic and cultural shift that led to a new way of living: the share house.

For the first time, women could live independently of families or husbands, and find support networks outside the nuclear family model. In these experimental living arrangements, typically located in inner urban suburbs, women were free to become activists, creatives, hedonists and intellectuals.

Before this time, women had usually gone from the family home to homemaking with a male partner. Even if studying or working part-time, they generally lived temporarily with a relative, an older, trusted family friend, or a landlady. 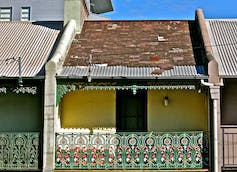 In my interviews with women who lived in share houses in Melbourne and Sydney from the late 1960s to the late 1970s, most described these as places of freedom from the expectations of one’s upbringing – particularly gendered ones.

“It was as if parents didn’t exist,” said Amanda, an artist. “I could be whoever I want to be. I could do whatever I want, and my art could be what I wanted.”

Many of my interviewees spoke of disillusionment with their suburban upbringing. It represented conformity, a predictable life trajectory and narrow-mindedness, and was often viewed as a place of entrapment and confining gender relations.

In a 1974 edition of the Melbourne University newspaper Farrago, a woman named Leanne observed that:

to me, the way people live is political. What most people see as a ‘natural’ way to live, in a family … is in fact, a value judgement imposed by a dominant middle-class culture and ideology.

Talking to me, 40 years later, Leanne reflected that communal share houses were:

very conscious efforts to take responsibility for children in a kibbutz-style way, sharing childcare, domestic labour, freeing up the women to live their own independent lives.

The inhabitants experimented with polyamory and spent many hours discussing “how not to be jealous” – with “zero success”, Leanne noted. 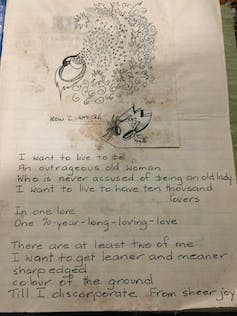 A poem written by one of the interviewees in the ’70s. Author provided

Deidre, who lived in shared houses in Carlton in the late 1960s and early 1970s, remembers discussing communal housing in women’s consciousness-raising groups as way of “creating a new way of living” where all inhabitants put equal work and love into the shared home. “The men were supposed to agree,” she said, “and a lot of them did.”

These communities were also crucial in fuelling a proliferation of women’s creativity, with the rise of women’s art and film-making collectives. Amanda remembers the very night she split up with her first husband. She had attended a women’s consciousness-raising group and realised that as long as she was married to him, his artistic ambitions would be the priority. (“If we were both working, who would bring in the cup of tea?”) In the share-house community of Carlton and Fitzroy, she found the space and support to focus on her own creativity.

Novelist Helen Garner famously captured this world in early works such as Monkey Grip and The Children’s Bach. The women in Garner’s stories resisted gendered identities like “mother” or “homemaker”, often sharing lovers and childcare in communal arrangements. As Garner’s protagonist Janet observes in Cosmo Cosmolino, she and her peers “despised our mothers for their sacrifice”.

Still, while women found freedom in these communities, they sacrificed it too. Enormous emotional energy was spent discussing how to share their space, lives, domestic duties, resources and sometimes lovers. Leanne joked that her house was run “a bit like a military machine”, and remembers her envy at the seeming simple pleasures enjoyed by suburban families she would watch at the supermarket.

Another woman, Gina, recalled the pain and jealousy she felt when sharing a home with her husband and his lover – an arrangement that at the time felt ideologically important. “It was interesting,” she said, “because it was a philosophical decision, whereas the gut is completely prehistoric.” 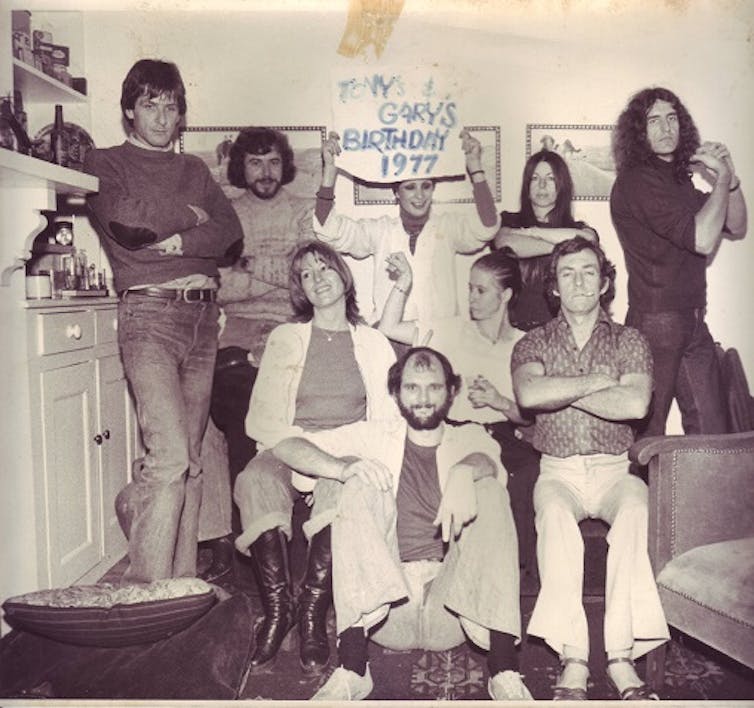 Many of my interviewees spoke fondly of the houses they lived in, and particularly the evenings, meals and music they shared. Some eventually shacked up with partners, as the wave of communal living experiments died down in the late 1970s.

Some, though, continued to live in alternative arrangements. One interviewee moved to Nimbin in the 1980s; one lives in a friendship arrangement with her ex-husband, who is in a gay relationship; one founded a publishing business and communal house in North Fitzroy, which lasted throughout the 1980s and into the 1990s.

Looking to this period of history is useful at a time when many speak of increasing social isolation, and when housing is less affordable than it has ever been. Today, the proportion of over-30s adults living in share houses has risen. But the communal nature of these share houses is somewhat diminished.

Deidre lamented to me that young people today don’t seem to enjoy the same sense of community that she did.

It wasn’t this individual thing, having your own food in the fridge and having it marked … it was like a family thing.