Recent elections around the world have raised concerns about the procedures used for voter registration and their potential consequences. The effects include disenfranchisement (voters being prevented from casting a ballot) and voter rights, fraud and security, and mismanagement and accuracy.

It’s critical to strike the right trade-off between making registration accessible and making it secure. But how many countries are affected by these sorts of issues? And which is more problematic – lack of security or lack of inclusion?

Our Perceptions of Electoral Integrity survey asked experts for their assessments of electoral integrity in 161 countries that held 260 national elections from January 1 to June 30, 2017.

The study used three criteria to monitor the quality of the voter registration process: inclusion, accuracy, and security.

These aspects can be considered equally important to ensure all and only eligible citizens are able to vote. The items can be analysed separately and also combined into an index.

As illustrated below, the results show the quality of the voter registration process in Northern Europe and Scandinavia performed well, as did several Latin American countries like Brazil.

At the same time, voter registration proved problematic in many countries in Africa and the Middle East, as well as in India and parts of Asia.

The US compared relatively poorly with equivalent liberal democracies on voter registration. This is in no small measure due to the partisan polarisation over the issue, and past reliance on self-registration. By contrast, governments in many other countries register voters on their behalf. 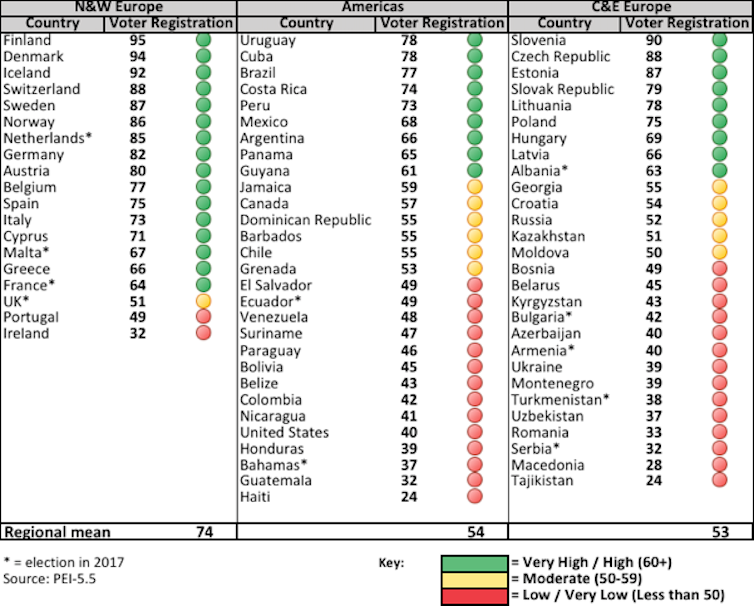 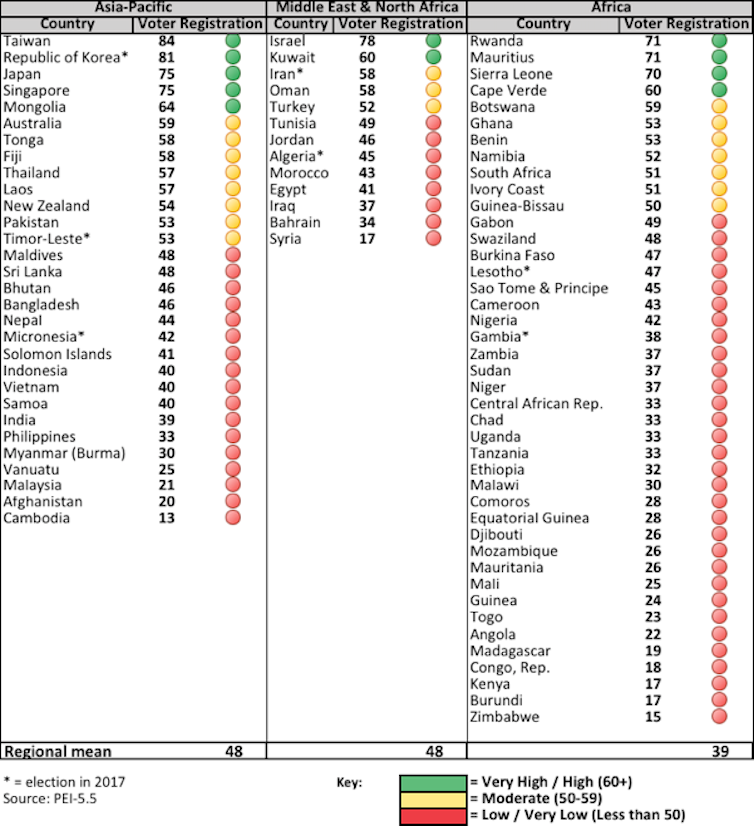 The quality of voter registration worldwide. Authors Inclusiveness versus security The global comparison below shows mean ratings on the measure of inclusion on the vertical axis. The measure of security is shown on the horizontal. Some countries performed well on both indicators – notably Sweden, Denmark and Finland, as well as Slovakia, Costa Rica and the Czech Republic. By contrast, many other places (located in the bottom left quadrant) performed poorly on both measures, such as Syria (which failed to allow citizens to vote if they had fled to neighbouring states as refugees), Haiti (which lacked the capacity to administer elections), Bahrain (with internal conflict), and Afghanistan (with high levels of electoral corruption). Finally, several countries scored worse on inclusiveness than on security. In these elections, experts thought the more serious problem was the exclusion of eligible citizens. These problems can arise for many reasons – such as disputed citizenship rights, attempts at voter suppression, lack of capacity to include young people, women, linguistic or ethnic minorities and hard-to-reach rural populations, or failing to maintain up-to-date electoral rolls. 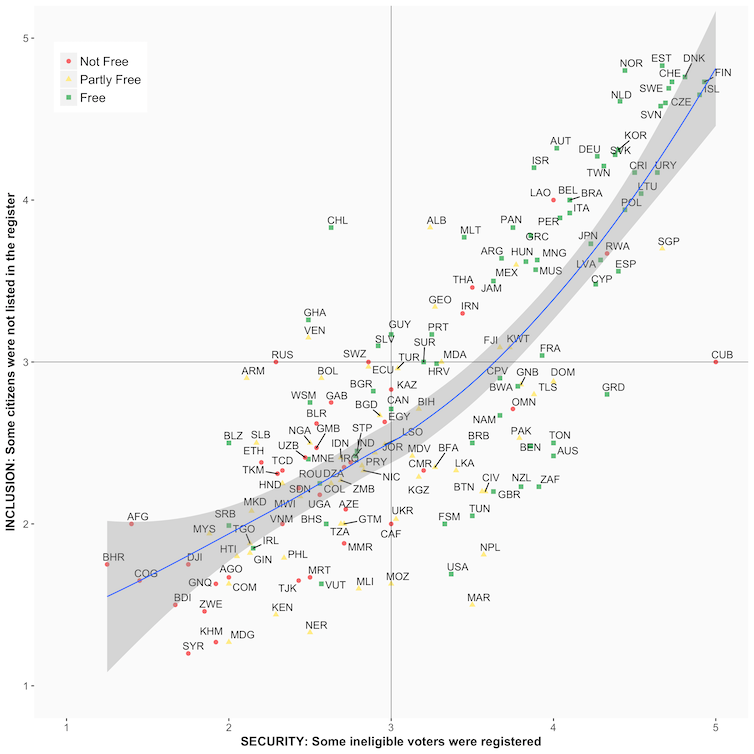 Monitoring inclusion and security worldwide. Scale ranges from strongly agree (1) to strongly disagree (5). Regimes classified according to Freedom House. Authors Responding to the challenges So, the challenge is to strike the optimal balance between security and accessibility, to make ensure eligible citizens – and only eligible citizens – cast a ballot. Doing so strengthens public confidence in the electoral process and democracy. Easier registration processes, such as the availability of online applications and same-day registration, usually strengthens voter turnout. But the introduction of more accessible registration without sufficient verification raises security risks of abuse and fraud. In the US, parties are deeply polarised over whether the use of strict photo ID at polling places helps maintain accurate and reliable lists, or whether this suppresses voting rights for eligible citizens who lack such ID. A 2012 report found many American states faced major challenges of accuracy, cost, and efficiency in their voter registration systems. Since then, they have made many efforts to upgrade electronic procedures by allowing citizens to register and check their records online. An initiative sweeping the US – led by Oregon in 2015 – is states requiring citizens to opt-out rather than opt-in to being registered to vote. But new risks have also became evident, not least Russian meddling and cyber-security threats to official voting records. To tackle this, the US Electoral Assistance Commission has recently issued new guidelines, working with the states and the Department of Homeland Security to implement them. Yet the overhaul of America’s ageing voting equipment will carry a hefty price tag. Foreign attempts at interference in voting have been reported in other countries, including Germany and France. Following the 2017 UK general election, the Electoral Commission expressed concern about the risks of double voting and duplicate registration applications. In populous developing countries like Afghanistan and the Democratic Republic of the Congo, without reliable census information or identification documents, the challenges are even greater. Poor quality records can create opportunities for vote manipulation. Strict registration processes, such as those relying on biometric technologies for ID, may remove ineligible applicants but simultaneously throw out legitimate voters and make the list less accurate, not more. And biometric voter registration, which many African countries have adopted, presents challenges for the protection of personal information.