Thor: Ragnarok - the latest addition to the Marvel Cinematic Universe – is the best of the Marvel films. The third in the Thor series, directed by New Zealand wunderkind Taika Waititi, its narrative follows the battle between Thor (Chris Hemsworth), the brawny god of thunder, and his sister Hela (Cate Blanchett), goddess of death.

Hela makes a push to claim the throne of the kingdom of Asgard; she wants to use this power to conquer the rest of the universe, which, she believes, rightfully belongs to the Asgardians. Thor, assisted by a diverse group of allies, including his shifty brother and occasional enemy Loki (Tom Hiddleston), undergoes various trials and tribulations, before coming up against his evil sister in a final epic battle, waged over the fate of the cosmos.

Though the story does connect with and extend elements from the earlier Thor films, Thor: Ragnarok feels like a different beast entirely, and I can understand why diehard Marvel fans (I’m not one) might be disappointed.

Whereas the earlier Thor films featured numerous pompous, posturing monologues about heroism, virtue, and fate, the spirit of Waititi’s film is diametrically opposite to this. It offers a joyous kaleidoscope of colour and swirling psychedelic imagery, underscored by a crisp, retro-synth soundtrack. The flamboyantly designed action sequences, including one where the Hulk battles a giant wolf, are frequently punctuated by moments of genuinely hilarious dialogue.

Hemsworth is in his element as the hunky God, appropriately shirtless for at least one scene, albeit a short one. He plays the part with a disarming humour, as though sending up his public persona as Hollywood heartthrob, mimbo of the moment. Jeff Goldblum’s performance as Grandmaster, the blue-eye-liner wearing DJ and megalomaniacal ruler of the planet Sakaar (basically an intergalactic waste dump), is comically delirious. Mark Ruffalo is equally a pleasure to watch as Bruce Banner (aka the Incredible Hulk), even if his stint in the film in human form feels short. 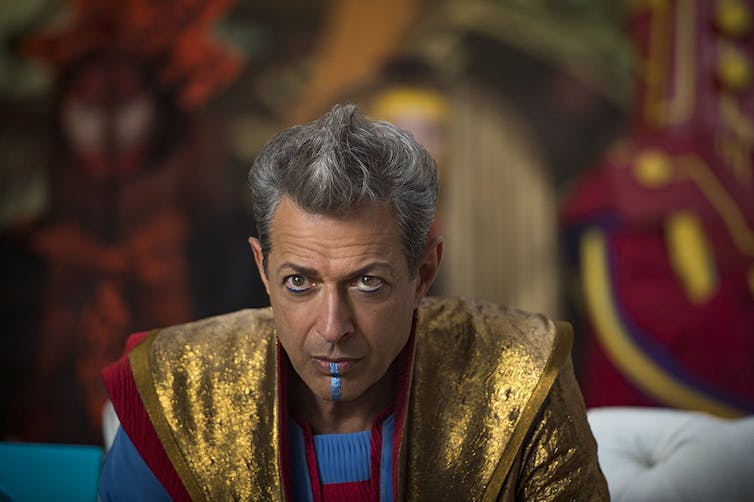 I will be eternally suspicious of Cate Blanchett playing a super-villain after her painfully hammy turn as Irina Spalko in Indiana Jones and the Kingdom of the Crystal Skull (2008), but she is surprisingly restrained, here, as the malevolent Goddess, keeping the character grounded with her superb physical presence. 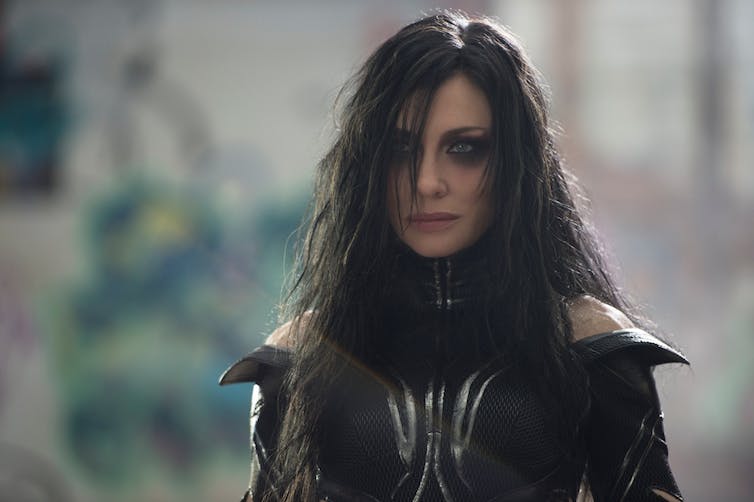 None of the actors offer poor performances – an incredible feat in itself, given how much of the film would have been shot in front of green screen. Tessa Thompson is appealing as a Valkyrie warrior, Hiddleston is fine reprising his role as Loki, and Anthony Hopkins as Odin, playing the sage, greybeard type he seems destined to repeat for the rest of his career, thankfully, only appears in a couple of scenes. Perhaps Idris Elba is wasted. As Heimdall, a warrior-guide on Asgard, Elba has a thankless, inconspicuous part for an actor of his stature and magnetism. 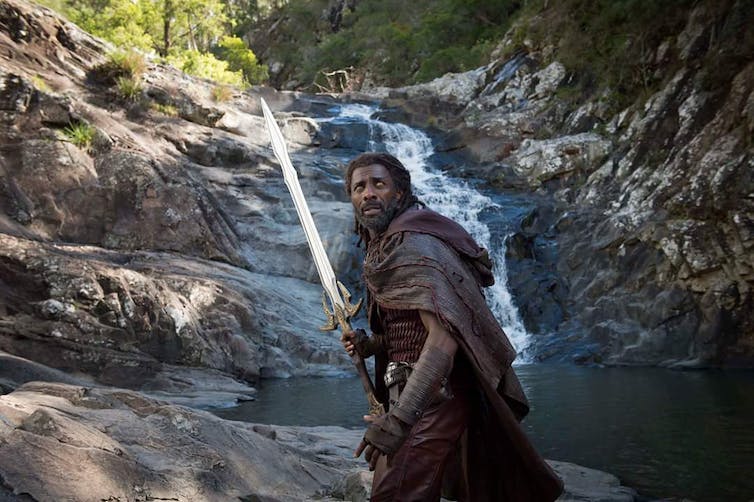 In contrast to Blade Runner 2049, the other mega blockbuster recently released, the cast and crew here look like they’re having fun. This is, after all, one of the primary motivations for these ritual stagings we call cinema – and it lends an infectious vitality to material that could otherwise seem tawdry and trite, demanding that viewers, too, participate in the party.

The brilliance of the film, indeed, resides in its audiovisual qualities. Its look is magnificent, especially the segment on Sakaar, and the brilliant synth score by Mark Mothersbaugh is alternately spritely and hypnotic, a perfect homage to the scores of the electro-infused, smoky-neon-lit VHS fare upon which the film’s makers clearly grew up.

Astonishingly, Thor: Ragnarok does not shy away from a thoughtful, though conventional, depiction of what are probably the two biggest political crises of our time. In the depiction of the planet Sakaar, the film cleverly situates problems of waste management within the broader ecological discourse of global warming – isn’t it the ultimate dream of the big polluters to have another planet on which to dump Earth’s waste?

And it has a few things to say on the ways in which forced migration and asylum seekers act upon, test and strengthen the tenacity of identity, culture and kinship.

The whole thing is perhaps a little opportunistic in its trashy, post-Stranger Things retro-nostalgia trip. And perhaps this is more evidence of the cynicism of Hollywood producers, willing to modify their output to fit whatever is “trending”. But it is just so well done that I challenge any viewer who came of age as a cinema-goer in the 1980s not to embrace it. This is like the live-action Masters of the Universe film that never got made (including teleportation design that recalls the saturated prismatic colours of MOTU).

In addition, this is one of the best comedies I’ve seen recently – it is a comedy in superhero guise – but its humour is far from the sentimental, saccharine gags of other films from Marvel, like Spider-Man: Homecoming (2017) or The Avengers (2012).

The well-conceived situational humour of Eric Pearson’s sharply written screenplay is brought to life by brilliant comedic performances from the actors, including Waititi himself, who plays Korg, a Kiwi-bro made of rock. His first line to Thor is: “I’m made of rock – you don’t need to be afraid, unless you’re made of scissors.”

Thor: Ragnarok is one of the best films I’ve seen this year – which is something I never thought I’d say about a Marvel film. We can put this down, I suspect, largely to the direction of Waititi, a master of low-key humour, who shot to fame with his second feature film, Boy (2010) and followed it up with New Zealand hits What We Do in the Shadows (2014) and Hunt for the Wilderpeople (2016). If this one is anything to go by, Waititi will be making Hollywood films for a long time to come.