The latest round of 2016 census data shows that the gig economy has taken hold in Australia, that there has been a huge surge in fitness, beauty and barista jobs; and that even though we’re working less, women still do the most housework.

But if we look past these headlines, the Census gives us a unique insight into the economic outcomes of the Aboriginal and Torres Strait Islander population, single parents, those entering the labour market and those coming to the end of their working life.

What we see is geographic divergence in Indigenous employment, declines in employment for single parents and the young, and the news is mixed for those entering retirement age.

One of the targets of the Closing the Gap strategy (which is slated to undergo a “sweeping overhaul”) is to “halve the gap in employment outcomes between Indigenous and non-Indigenous Australians within a decade (by 2018).”

But the latest census data shows that there has been no demonstrable improvement in employment outcomes over that decade, or even in the five years between the 2011 and 2016 Censuses.

Specifically, 44.1% of the adult Indigenous population was employed in 2016, compared to 44.2% in 2011. Over this period, employment rates for Indigenous women increased by 1.3%, but fell for Indigenous men by a similar amount.

This national-level stagnation also hides considerable geographic variability, as shown in the map below.

In remote Australia, employment has fallen dramatically in most regions, with employment-to-population ratios plummeting by more than 15% in some regions. Much of this decline is likely attributable to the phasing out of the Community Development Employment Projects scheme and its replacement with a work-for-the-dole program whose participants are classified as unemployed.

In more populous areas, Indigenous employment has grown steadily, especially in NSW where employment growth has been particularly rapid and has been accompanied by substantial population increase. 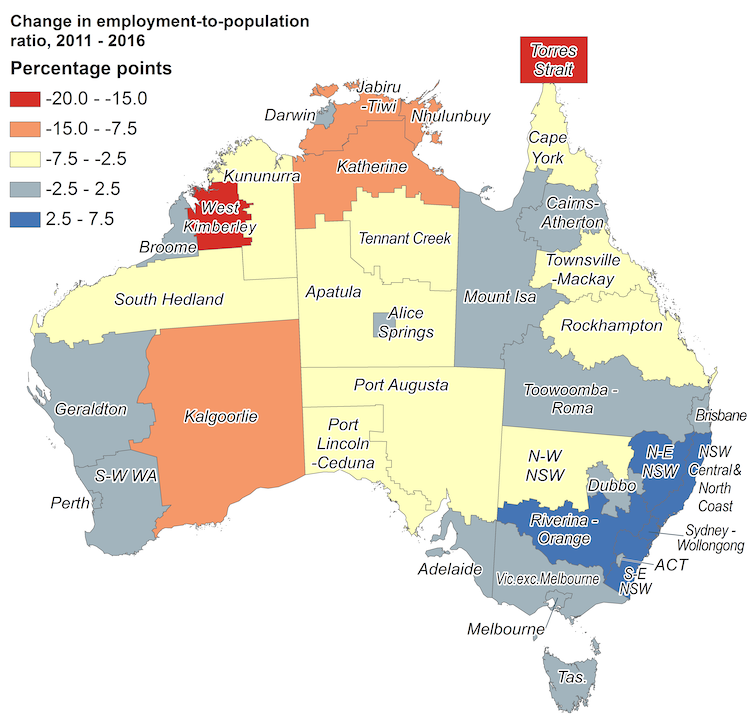 Change in Indigenous employment-to-population ratios across Australia, 2011 - 2016, by Indigenous Region.

There are many good arguments for rethinking the Closing the Gap targets. However, they have had the benefit of highlighting policy failure and success. Hopefully a renewed focus on strengths and positive achievements does not diminish this accountability.

According to the Census, there was 959,543 single parent families on the night of the Census. Of these, around 54.2% were employed, 5.9% were unemployed and the remainder not in the labour force. By comparison, in 90.6% of couple families with children, at least one parent was employed in 2016.

That is, despite considerable focus on childcare, significant changes to welfare policy, and a number of active labour market policies and changes to employment support, a child in a single parent household is less likely to have that parent employed than five years ago.

From a policy perspective, we should be careful about forcing single parents to work when they have caring responsibilities that cannot be substituted. However, we have to do better in providing the support, training and employment environment where those single parents who do want to work are able to.

This includes ensuring childcare is sufficiently flexible, affordable and of high quality, trialling targeted interventions that boost skills and employability, and lessening the conditionality of parenting payments that reduce the incentives for recipients to find work.

New labour market entrants and those of retirement age

The current labour market is clearly working for some, but not others. Two groups for whom employment is particularly important are the relatively young and those at the end of their working lives.

For those nearing retirement age, maintaining an active and conscious engagement with the labour force (on their own terms) can support health outcomes and financial stability.

Focusing on the young, to start with, we can look at the 25-29 year old population. For the majority of this group, school and post-school education is mostly finished, and child care and other responsibilities are yet to have kicked in. Over the last five years, however, employment for this group has gone backwards.

The young adult labour market is not what it was pre-global financial crisis (the unemployment rate for 25-29 year olds in the 2006 Census was 5.6%), or at the peak of the mining boom. Clearly the macro-economy matters, but we also need to trial and adjust new types of active labour market support for young adults.

As a society, we are going to be increasingly reliant on those at the end of their working lives to support and mentor people entering the labour market, to maintain the tax base, and to support themselves as they prepare for retirement.

More people are working, but more people are actively looking for work. On balance, this is probably positive, but we also need to make sure that we are minimising the incidence and effects of age-related discrimination.

Delving into the employment statistics in the 2016 Census tells a more nuanced story than is evident from the monthly Labour Force Survey. In particular, remote Indigenous employment and outcomes for single parents show deeply concerning trends. Policy measures may need urgent consideration to increase employment opportunities and ameliorate poverty among these population groups.