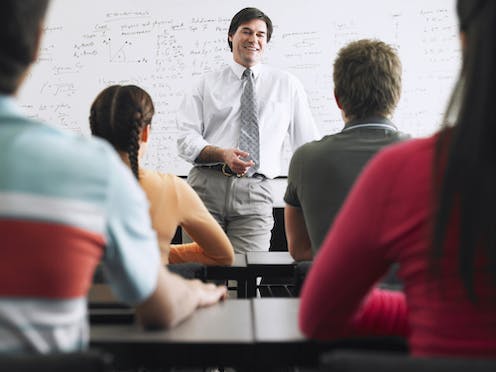 In a recent Productivity Commission report, the bias of universities in favour of research over teaching was exposed.

The proposed higher education reform that would have seen A$380m cut from university funding was rejected by the Senate, but the word is that Education Minister Simon Birmingham has return to the bunker to develop a new strategy. The most likely scenario is that vice-chancellors will need to cut costs, and we know where the axe will fall. Teaching-focused academics will be the hardest hit, and the cuts will be felt in the classroom rather than the research laboratory.

What is a teaching-focused academic?

Read more: Performance funding is not the way to improve university teaching

Teaching-focused academics are often considered to be “lesser” academics (Academicus minor). While evidence of research success is measured by volume (number of publications and research income), evidence of teaching scholarship is less quantifiable.

Even when a teaching-focused academic is recognised for teaching excellence, it may not be acknowledged by their peers, or they may be subject to ridicule from other academics.

Teaching-focused academics are more likely to be made redundant. Vice-chancellors tend to use the “rank and sack” method to protect researchers. Academics are ranked on the basis of research volume, and those individuals below a certain threshold are sacked.

A twist to the “rank and sack” method is to give the academic the option to become teaching-focused. An attitude of “anyone can teach” prevails. The departure of teaching-focused academics is felt in the classroom. These are the academics who keep up-to-date with technology, current trends in assessment practices and curriculum development.

Over the last decade there has been a significant increase in casual staff, primarily to support teaching. When a tenured position becomes available, an academic with a track record in research is often appointed rather than a teaching-focused and, most likely, casual academic.

In Canada, universities hiring a research academic with a proven record rather than a popular teacher for a tenured position led to a petition from students. The popular teacher’s contract was extended.

Not renewing casual contracts is an easy fix for a manager who needs to cut costs. It isn’t so easy on the academic who relies on the income. Recently, an academic who had worked as a casual academic in Sydney for 15 years and was passed over for tenured positions committed suicide.

At a national level, there is further evidence that teaching is not valued at universities. The Australian Research Council (ARC) distributes much of the category one research funding to universities. It started in 1946. In contrast, the Australian government’s teaching and learning body started as the Carrick Institute in 2006, and was renamed Office of Learning and Teaching (OLT). The OLT was shut down in June 2016. What would be the reaction to dissolving the ARC?

In 1992 Ruth Neumann, after interviewing heads of department and university executive, revealed a cultural bias against teaching-focused academics. Knowledge of the discipline was valued more than teaching skills. The following quotes are from her report:

the teaching of those academics not involved in research was described as: repetitive, dull, unstimulating, unexciting, dry, sterile and stagnant.

This cultural bias against teaching-focused academics may not be so explicit, but statistics regarding casualisation, poor promotion prospects, redundancy priorities and the attitude to teaching awards indicate that very little has changed. This bias still exists.