Most of us probably know exercising is associated with a smaller risk of premature death, but a new study has found that doesn’t have to happen in a CrossFit box, a ninja warrior studio, or even a gym. Body weight-bearing exercises such as sit-ups and push-ups staved off death just as much as other forms of weight-bearing exercise.

Our study recruited just over 80,000 adults over 30 years living in England and Scotland between 1994 and 2008, who were followed up for an average of nine years. At the end of the followup period, we calculated their risk of death according to their strength-promoting exercise and how much they did.

Those who reported participation in any strength-promoting exercise (including gym workouts) averaged about 60 minutes a week and those who reported any own body weight exercises averaged 50 minutes a week. Participation in either gym workouts or own body weight exercises reduced the risk of early death by about 20%. Cancer-related deaths also decreased by 24-27%, but there was little evidence more was better.

Read more: Do you even lift? Why lifting weights is more important for your health than you think

Compared to being inactive, meeting either guideline was associated with a 16-18% reduction in risk of early death.

On the other hand, reducing the risk of death from heart disease was only associated with aerobic physical activity (21% reduction). 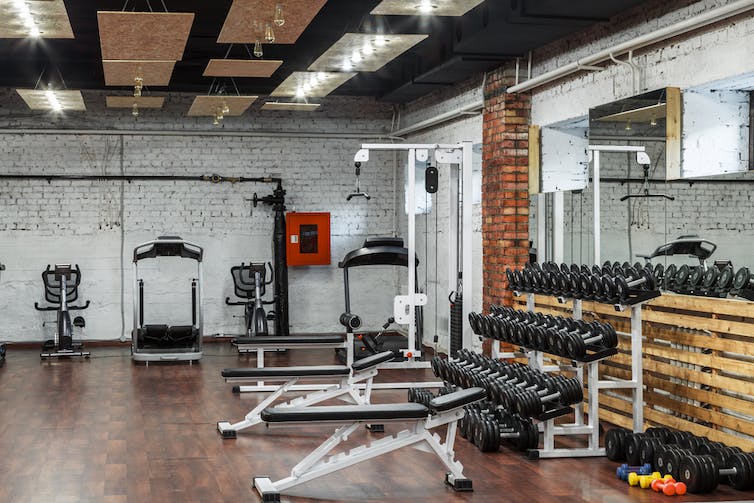 Gyms can be daunting for beginners. from www.shutterstock.com

Given this research is observational, there’s always a chance the relationship between exercise and early death could be due to other causes. Perhaps the people who exercised more were also just generally healthier in other ways.

To reduce the possibility of alternative explanations, we adjusted our results for age, sex, health status, obesity, other lifestyle behaviours (smoking, alcohol, diet), education level, mental health, and participation in other physical activity such as domestic activities, walking and aerobic exercise.

People with chronic diseases are less likely to exercise, and more likely to die early. Therefore we excluded from the results all participants who had heart disease or cancer, as well as those who died in the first two years of the followup (because their death was most likely caused by something they had prior to the study commencing).

Other studies have examined the relationship between strength promoting exercise and early death. An American study found lifting weights or doing callisthenics was associated with a 31% decrease in risk of death from any cause, which is consistent with our results. But contrary to our results, the same study found no association with cancer death risk.

Another study among cancer survivors showed lifting weights, but not aerobic activities, was associated with a 33% lower risk of death from any cause.

Read more: How we can change our body shape with exercise

What it all means

Our study suggests exercise that promotes muscular strength has unique health benefits and is at least as important for health as walking, cycling, and other aerobic activities.

We shouldn’t forget the most important principle for choosing an activity is being able to incorporate it into your routine and stick to it long term. The simplicity of body weight exercises makes them a very attractive option: they are inexpensive and require little skill and no equipment. Plus we now know they yield comparable benefits to similar gym-based activities. This is important given gyms can be daunting or unaffordable for many people.

So in addition to doing enough moderate to vigorous intensity aerobic activity, good old fashioned push-ups or chin-ups at home, in the park, in the yard, or even in the office could be an excellent option. For most people two to three sessions a week would be sufficient for general health.

The American College of Sports Medicine recommends 2-4 sets of 8-15 repetitions of each strength promoting exercise with 2-3 minutes rest between sets. As with any physical activity, the most important principle here is a little is better than nothing, and gradually build up from little to enough.