The first thing to say about shark attack deaths is that they are very rare, with only about two per year in Australia. But still, every year without fail, people die from shark bites, both here and around the world.

According to official statistics, the United States records by far the most unprovoked shark bites – an average of 45 per year over the past decade. However, only 1.3% of these incidents were fatal – 0.6 deaths per year.

Australia records fewer bites than the US (an average of 14 per year), but a much greater proportion of them are deadly: (1.5 per year, or close to 11%). So what is it that (relatively speaking) makes Australia more prone to deadly shark attacks?

Read more: Not just nets: how to stop shark attacks without killing sharks

My new book Shark Attacks: Myths, Misunderstandings and Human Fear addresses this and other questions about sharks, with the aim of dispelling common myths and providing the knowledge needed for decisions made on science rather than fear and emotion.

In a way, Australia has a “perfect storm” of conditions for serious shark attacks. The first reason is that Australians (and visitors to Australia) love the ocean. Some 85% of Australians live within 50km of the coast, and Australian coastal areas account for the most prominent growth outside of capital cities. Beaches are also favoured recreational destinations in Australia and coastal locations are heavily targeted in tourism, attracting nearly 60% of international tourists.

Next, the sharks themselves. Australia has the world’s highest diversity of sharks and rays, including roughly 180 of the 509 known shark species.

But neither of these factors, even taken together, is enough to explain why deaths are more prevalent in Australia. What we really need to look at is dangerous sharks.

Only 26 shark species have been definitively identified as biting humans without provocation, although the true number is likely to be somewhat higher. Of these 26 species, 22 (85%) are found in Australian waters.

All 11 of the species known to have caused fatal unprovoked bites on humans can be found in Australian waters. And crucially, Australia’s coastal waters are home to all of the “big three” deadly species: white sharks, tiger sharks, and bull sharks. 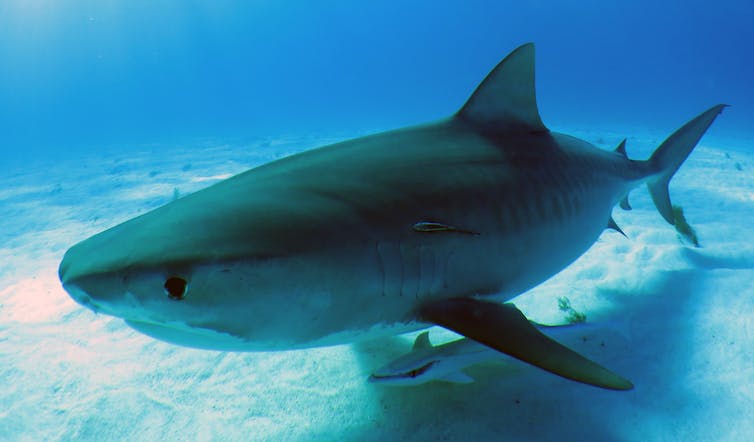 Australia’s waters are home to all three of the ‘big three’ shark species. Denice Askebrink

These species account for all but three of the 27 fatal shark attacks worldwide from 1982-2011. All of the big three species are inquisitive, regularly frequent coastal environments, and are formidably big and strong.

They also have complex, unpredictable behaviour. But despite this difficulty, we can identify factors that make them more likely to swim in areas routinely used by humans.

White sharks have a physiological adaptation that allows them to maintain a vast global distribution, and hence are responsible for the northernmost and southernmost recorded shark bites on humans.

Most fish are ectothermic, or cold-blooded, with body temperatures very close to that of the surrounding water. This restricts their range to places where the water temperature is optimal.

In contrast, white sharks and a few other related species can retain the heat generated by their muscles predominantly during swimming, enabling them to be swift and agile predators even in cold water. They do this with the help of bunches of parallel arteries and veins in their brains, eyes, muscles and stomachs that function as “heat exchangers” between incoming and outgoing blood, allowing them to keep these crucial organs warm.

White sharks are so good at retaining heat that their core body temperature can be up to 14.3℃ above the surrounding water temperature. This allows them to move seasonally up and down Australia’s east and west coasts, presumably following migrating prey species.

Bull sharks, meanwhile, are the only sharks known to withstand wide variations in water salinity. This means they can easily move from salty oceans to brackish estuaries and even travel thousands of kilometres up river systems. As a result they can overlap with human use areas such as canals, estuaries, rivers and even some lakes. One female bull shark was observed making a 4,000km round-trip to give birth in a secluded Madagascan estuary rather than the open ocean.

As a result, most bull sharks found in river systems are juveniles, but these areas may also be home to large, pregnant females who need to eat more prey to sustain themselves. As rivers are often clouded by sediment, there is an increased risk that a human may be mistaken for prey in this low-visibility environment. 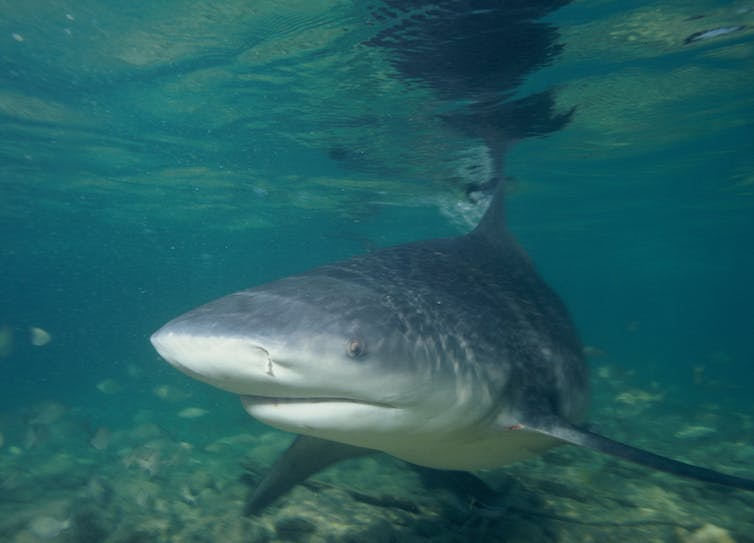 Bull sharks can roam in rivers as well as oceans. Albert Kok/Wikimedia Commons

Tiger sharks mainly stay in coastal waters, although they also venture into the open ocean. Their movements are unpredictable, they eat a wide range of prey, are naturally curious and opportunistic, and can be aggressive to humans.

Tiger sharks are clever too – they are thought to use “cognitive maps” to navigate between distant foraging areas, and have hunting ranges that span hundreds of thousands of square kilometres so as to maintain the element of surprise. As a result, tiger sharks’ distribution in Australian waters covers all but the country’s southern coast. 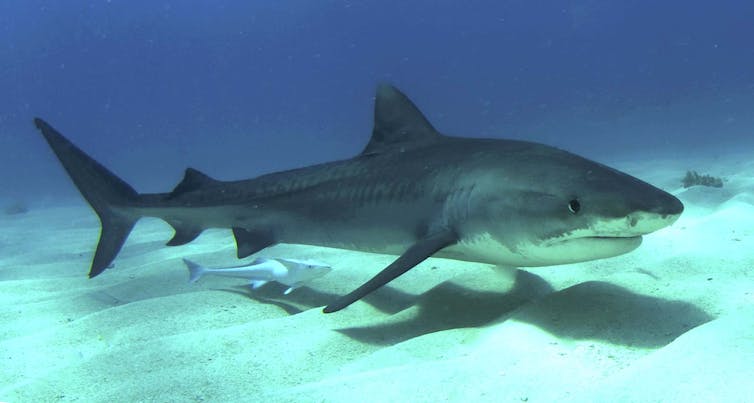 Taken together, it’s clear that Australia’s waters are home to three predators that can pose a real danger, even if only an accidental one, to humans.

But remember that shark attacks are incredibly rare events, and fatal ones even rarer still. There are also lots of tips we can use to minimise the risk of having a negative encounter with a shark.