The Uluru-Kata Tjuta National Park board of management has announced that tourists will be banned from climbing Uluru from 2019. The climb has always been discouraged by the park’s Traditional Owners (the Anangu people) but a number of tourists continued to climb the rock on a daily basis. Below, in English and Indigenous language, Sammy Wilson, chairman of the park board, explains why his people have decided to ban the climb outright.

THE Uluru-Kata Tjuta National Park Board has announced tourists will be banned from climbing Uluru, an activity long considered disrespectful by the region’s traditional owners.

Anangu have always held this place of Law. Other people have found it hard to understand what this means; they can’t see it. But for Anangu it is indisputable. So this climb issue has been widely discussed, including by many who have long since passed away. More recently people have come together to focus on it again and it was decided to take it to a broader group of Anangu. They declared it should be closed. This is a sacred place restricted by law.

It’s not just at board meetings that we discussed this but it’s been talked about over many a camp fire, out hunting, waiting for the kangaroo to cook, they’ve always talked about it.

The climb is a men’s sacred area. The men have closed it. It has cultural significance that includes certain restrictions and so this is as much as we can say. If you ask, you know they can’t tell you, except to say it has been closed for cultural reasons.

What does this mean? You know it can be hard to understand – what is cultural law? Which one are you talking about? It exists; both historically and today. Tjukurpa includes everything: the trees; grasses; landforms; hills; rocks and all. 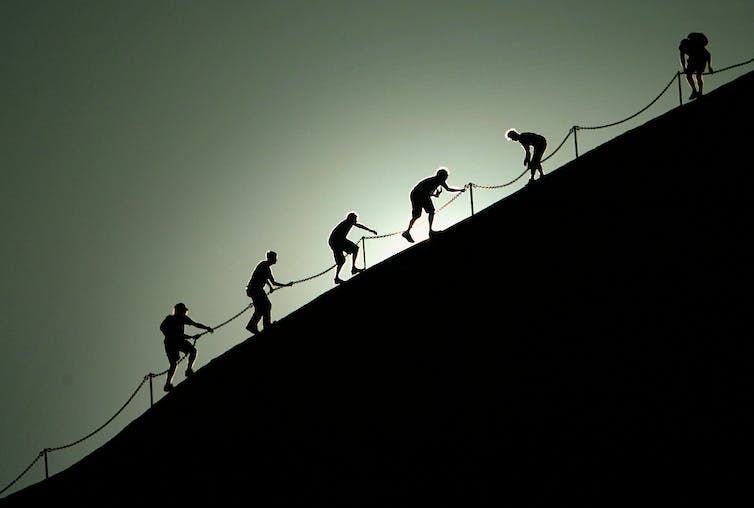 Tourists have previously used a chain to climb Uluru, but from 2019 the climb will be banned.

Some people, in tourism and government for example, might have been saying we need to keep it open but it’s not their law that lies in this land. It is an extremely important place, not a playground or theme park like Disneyland. We want you to come, hear us and learn. We’ve been thinking about this for a very long time.

We work on the principle of mutual obligation, of working together, but this requires understanding and acceptance of the climb closure because of the sacred nature of this place. If I travel to another country and there is a sacred site, an area of restricted access, I don’t enter or climb it, I respect it. It is the same here for Anangu. We welcome tourists here. We are not stopping tourism, just this activity.

On tour with us, tourists talk about it. They often ask why people are still climbing and I always reply, ‘things might change…’ They ask, ‘why don’t they close it?’ I feel for them and usually say that change is coming. Some people come wanting to climb and perhaps do so before coming on tour with us. They then wish they hadn’t and want to know why it hasn’t already been closed. But it’s about teaching people to understand and come to their own realisation about it. We’re always having these conversations with tourists.

And now that the majority of people have come to understand us, if you don’t mind, we will close it! After much discussion, we’ve decided it’s time.

Visitors needn’t be worrying there will be nothing for them with the climb closed because there is so much else besides that in the culture here. It’s not just inside the park and if we have the right support to take tourists outside it will benefit everyone. People might say there is no one living on the homelands but they hold good potential for tourists. We want support from the government to hear what we need and help us. We have a lot to offer in this country. There are so many other smaller places that still have cultural significance that we can share publicly. So instead of tourists feeling disappointed in what they can do here they can experience the homelands with Anangu and really enjoy the fact that they learnt so much more about culture.

Whitefellas see the land in economic terms where Anangu see it as Tjukurpa. If the Tjukurpa is gone so is everything. We want to hold on to our culture. If we don’t it could disappear completely in another 50 or 100 years. We have to be strong to avoid this. The government needs to respect what we are saying about our culture in the same way it expects us to abide by its laws. It doesn’t work with money. Money is transient, it comes and goes like the wind. In Anangu culture Tjukurpa is ever lasting.

Years ago, Anangu went to work on the stations. They were working for station managers who wanted to mark the boundaries of their properties at a time when Anangu were living in the bush. Anangu were the ones who built the fences as boundaries to accord with whitefella law, to protect animal stock. It was Anangu labour that created the very thing that excluded them from their own land. This was impossible to fathom for us! Why have we built these fences that lock us out? I was the one that did it! I built a fence for that person who doesn’t want anything to do with me and now I’m on the outside. This is just one example of our situation today.

You might also think of it in terms of what would happen if I started making and selling coca cola here without a license. The coca cola company would probably not allow it and I’d have to close it in order to avoid being taken to court. This is something similar for Anangu.

A long time ago they brought one of the boulders from the Devil’s Marbles to Alice Springs. From the time they brought it down Anangu kept trying to tell people it shouldn’t have been brought here. They talked about it for so long that many people had passed away in the meantime before their concerns were understood and it was returned. People had finally understood the Anangu perspective.

That’s the same as here. We’ve talked about it for so long and now we’re able to close the climb. It’s about protection through combining two systems, the government and Anangu. Anangu have a governing system but the whitefella government has been acting in a way that breaches our laws. Please don’t break our law, we need to be united and respect both.

Over the years Anangu have felt a sense of intimidation, as if someone is holding a gun to our heads to keep it open. Please don’t hold us to ransom…. This decision is for both Anangu and non-Anangu together to feel proud about; to realise, of course it’s the right thing to close the ‘playground’.

The land has law and culture. We welcome tourists here. Closing the climb is not something to feel upset about but a cause for celebration.

Let’s come together; let’s close it together.

Nyaa palatja, nyaa panya? You know sometimes it’s hard to understand panya: Tjukurpa nyaa? Which one? Ngarinyi tjukurpa, iriti tjinguru ngarinyi, Tjukurpa and he’s still there today. You know Tjukurpa is everything, its punu, grass or the land or hill, rock or what.

Iriti Anangu bin go and work on the stations. They work for the station manager he want his land, block of land and uwa munta-uwa nyangatja nyangatja. Anangu was camping there, putingka. Building their fence because its boundary. Boundary palyanu that’s the law, whitefella-ku law to look after cattle or sheep or whatever oh that’s the law, Anangu was building it, Anangu working and Anangu now is sitting outside, he can’t get in! malaku, ngura nyakuntjikitja. Putulta kulini, ‘ai? Why? nyaakula fence-ingka patinu? That was me! I built a fence for that bloke and that bloke don’t like me, I’m outside now. Munta nyanga purunypa, same, what I’m saying.