This article is part of the Democracy Futures project, a joint global initiative between The Conversation and Sydney Democracy Network. The project aims to stimulate fresh thinking about the many challenges facing democracies in the 21st century.

Almost every global city has a similar dynamic – a battle between the finance capital that seeks to make money from the city and the needs of the residents who seek to make the city their home.

Rarely do we see residents successfully push back against the power of finance capital. But for those wanting to know how this can be done, look to Barcelona.

I conducted face-to-face research in Barcelona and this story features in the first episode of my new podcast series, ChangeMakers.

In Spain, your sense of self is closely connected to owning a home. Franco created opportunities for people to own a home as a strategy to avoid revolution. Since the transition, parties on both sides have encouraged home ownership.

When the housing crisis came, the “Spanish Dream” came unstuck. Rising unemployment left many families unable to pay their mortgages and facing eviction.

Previously, if you were unable to pay your mortgage you sold your house. Now no-one wanted to buy those houses. People soon discovered how strict the foreclosure rules were – a little-known law allowed banks to evict if an owner defaulted on one mortgage payment. By 2017, half-a-million people had been evicted from their homes.

Enter the PAH, Plataforma de Afectados por la Hipoteca – “platform for people affected by mortgages”. In 2009 a small group of housing activists and progressive academics came together to contemplate what could be done. They set up an organisation to enable people to deal with this situation collectively.

The PAH ambitiously planned to disrupt this eviction crisis. But this wasn’t an easy task. About 50 people attended the first meeting in February 2009.

In the first year, according to co-founder Lucia Gonzalez, the group first needed to provide a space where people could grieve for what was happening to them – and to shift from thinking they were a failure for potentially losing their house to recognising it was a problem created by bigger social forces.

The PAH also realised they couldn’t fix people’s housing issues one by one. The problem was way too big. Instead, they needed to create spaces where people could teach each other how to solve their own problems.

They held Monday-night assemblies where people who were more experienced with housing issues helped those who were newly subject to evictions. Through working together, people came to realise the source of their problems was public policy. And to solve their own problem, and the broader policy problem, they had to work together.

Discovering the power of the public

Then 15M happened. Frustrated by what was happening to Spanish society, the Indignados – literally “the angry ones” – protested in their millions across Spain. The movement occupied Barcelona’s Plaza de Cataluna on and off for weeks.

15M – named after the day it started, May 15, 2011 – was a decentralised movement. As professor Joan Subirats from the Autonomous University of Barcelona told me in July, “there is no address [for 15M], there is no phone number”. It was a mass mobilisation, organised primarily using digital tools. In many ways it was a dramatic contrast to the intensive face-to-face organising work of the PAH.

15M lived in the town squares, and soon the PAH took advantage of those spaces. As Gonzalez told me, 15M “was a perfect storm”. The changemakers were able to connect the PAH’s deep organising work with the 15M mobilisation to grow their housing movement.

Carlos Macias joined the PAH around this time – he was invited to help “stop an eviction” where dozens, sometimes hundreds, of people would stand in front of threatened premises, risking arrest. The movement had come a long way once people lost their sense of shame and fear. Everyday people were prepared to take part in high-risk non-violent civil disobedience, and every time they won (and they won many times) they became emboldened changemakers.

But the housing policies that were the source of the problem had to be changed. To do this, they petitioned the federal government run by the conservative Popular Party to create a law to restrict the ability of banks to evict people who defaulted. They needed 500,000 signatures; they got 1.5 million. And much of the energy for collecting those signatures came from the mobilisations in the square. 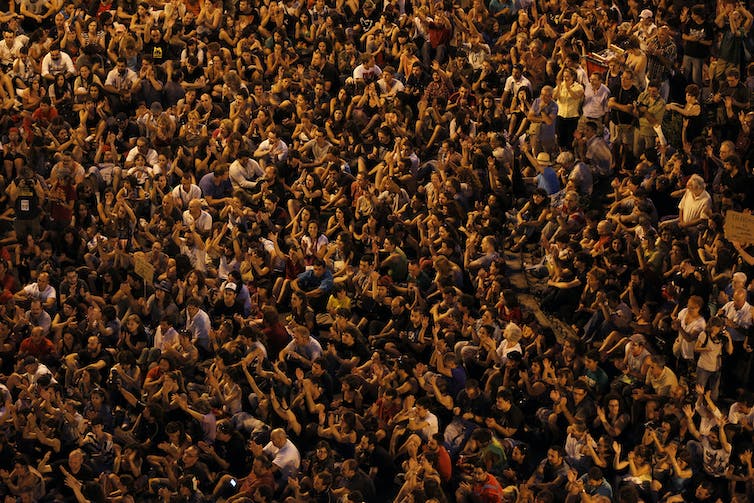 The mass mobilisations of the 15M movement created the public impetus for a political shake-up. Susana Vera/Reuters

They took the petition to Madrid and at the hearings one PAH leader, Ada Colau, famously accused a representative of the banks of being a criminal. It symbolised the crisis and propelled the PAH to national attention.

Colau became a symbol of the people fighting finance capital. The PAH, a community organisation, became the opposition in Spain, not just an opposition party but an opposition to the entire political class.

The PAH was unable to pass its legislation. The PAH then took a similar proposal to the Catalonian parliament. And there they succeeded. For a time evictions stopped, banks had to forgive the debts, finance capital was constrained.

And then the federal government appealed to the constitutional court and suspended the state law. They had lost again.

Taking on politicians at their own game

For some at the PAH, this became breaking point. For Colau and Gonzalez, they had tried every strategy they could imagine and it wasn’t enough. They began to think the unthinkable – should they create a political party?

Their frustration was that although, as Gonzalez said, “we had this big power in the street, the institutions were closed”. They debated among each other: could they build a party that was the political arm of the streets?

So they established a party. Barcelona en Comu was a coalition of five similar urban political parties in the city. Colau was the candidate for the mayor and a network of activists, several from the PAH, were candidates for the council.

The short story is they won. They won the most seats and Colau is now the mayor. It was a brutal battle, captured well in the film Alcaldessa.

The team were seasoned organisers who used many of the strategies pioneered with the PAH. Yet the pressures of getting elected versus speaking your values, the pressure from the media, the patriarchal nature of the electoral machine in Barcelona and the all-consuming nature of party politics all featured in the battle.

So what are the lessons from Barcelona?

The legislative climate in Barcelona has undergone a radical shift. Banks and big companies like Airbnb have been fined, the process of evictions is slower and more consultative, and the city is building public housing. 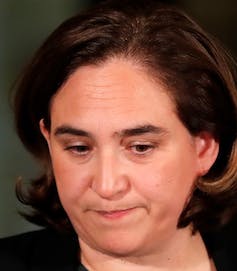 As mayor of Barcelona, Ada Colau is constantly reminded of the demands she made as a PAH leader. Reuters

There is a desire to locate the government with the experiences of the people. Colau conducts listening campaigns with residents, where she sits and hears residents’ concerns every other Friday. She has said to Gonzalez (who is now in the national parliament):

If it wasn’t for this (these listening sessions) I would be lost.

But others note that change isn’t happening fast enough. As Macias notes, Colau promised 80,000 new public homes when she came to power but there are just 3,000 as of October 2017.

He emphasises that political parties can’t be the answer. Without the deep face- to-face organising work of the PAH and the mobilising work of many Barcelona social movements, any party, including Barcelona en Comu, could become detached from the people.

Barcelona’s story is that radical urban politics are possible. Especially in a crisis, representative strategies like forming new political parties perhaps are a strategic choice for urban movements. Barcelona is one of many places around the world where this is happening.

At the Fearless Cities conference in Barcelona in June 2017, hundreds of city councils and social movement activists came together to explore the connection between electoralism and activism.

But it is unwise to presume that an urban political party can work on its own. No politician is above the pressures in public life that constrain and minimise radical action, as Colau’s record of delivering public housing shows.

If residents are to take over the city, multiple sites of social change are needed. This includes new political forces and potentially new political parties. There is also a need for organisations that work deeply in communities, like the PAH, dealing with crisis and connecting new leaders to political action – what I would call “organising strategies”.

And there is also a need for mass mobilisation, as we saw with 15M, where people from across social sectors and causes come together to advance a people-centred vision for the city.

But, helpfully, Barcelona provides inspiration for new political strategies in Australia. With our housing bubble, our inflated prices, with people excluded from the housing market, we may one day experience a crash. The organising strategies used in Barcelona may then become frighteningly relevant.

Even without a doomsday analysis, it is interesting to contemplate that perhaps new political parties – urban parties dealing with the urban politics of housing, transport and jobs – could be an innovative way of dealing with our own political malaise.

You can listen to the first Changemakers podcast here and find other episodes here.