Who would have thought that a film - let alone a funny film - could be made about the death of Soviet Union leader Josef Stalin? He was after all a man who, as General Secretary of the Soviet communist party from 1922 to 1953, oversaw a period of history characterised by political purges, famine, and millions of deaths.

Despite the improbability of turning Stalin’s demise into film, it has been done by Armando Iannucci (creator of The Thick of It), based on the graphic novels, La Mort de Staline and Funérailles, by Fabien Nury and Thierry Robin.

Iannucci has played fast and loose with history. Many other events portrayed in the film either happened later or under different circumstances. While the historical veracity of the film is shaky, it nevertheless does a good job presenting the contradictions and insanity of the Stalinist regime.

The film covers the time between March 1 1953, when a stroke incapacitated Stalin, and his funeral ten days later. Alone in his sitting room, as he listens to a Mozart recital, Stalin totters and collapses onto the floor.

When members of the Presidium (formerly the ruling Politburo) hear the news they rush to his dacha (country house), where they find Stalin “lying in a puddle of indignity”, as Nikita Khrushchev (Steve Buscemi) delicately puts it. The all-powerful dictator of the Soviet empire has wetted himself. 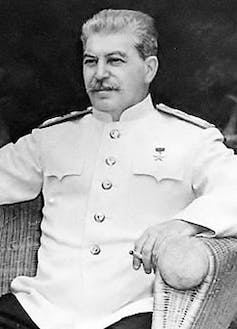 As his life ebbs away over the next four days, the men of the Presidium struggle to conceive of a world without Stalin, whose authority was absolute for so long. A meeting of the Presidium is quickly convened to decide what to do in the interregnum. They have been accustomed to voting unanimously, as directed by Stalin. Even now, with the boss (as they call him) comatose, they cannot break free.

Vyacheslav Molotov (Michael Palin), in a long speech, tries to second guess what Stalin would have decided. As he reaches a conclusion, all hands go up - as they would had Stalin been at the head of the table. But then Molotov puts forward another line of argument. Once again, the men are ready to vote in favour…

Iannucci is best known for lampooning the capricious exercise of political power. In The Thick of It he takes aim at the overblown egos of British politicians and the machinations of their spin doctors. In Veep, US politics gets a similar treatment. In both these series, Iannucci is on safe ground as he mocks the contemporary political establishment. Even though the settings are fictional, his audience can easily see the relevance. While exaggerated (although not always), the satire exposes the follies of politicians.

Unlike these TV series, The Death of Stalin does not have an obvious contemporary relevance, which blunts its ability to satirise current events. This period of Soviet history could easily been seen as a historic curiosity, a reminder of just how brutal, dysfunctional and absurd the Soviet era was, but little more.

A strong theme that came out of this film is the cult of personality, as exemplified by Josef Stalin. How relevant is that today?

The US presidency of Donald Trump exhibits some of the same personality characteristics, although of course he has not committed the same atrocities as Stalin. Trump has attacked the media (calling facts that he dislikes “fake news”), and issues his own thoughts and policies through social media. Enemies are harassed and humiliated, whether his targets are basketball players kneeling during the national anthem or families of US soldiers who died in service.

Within the vaudeville of Iannucci’s portrayal of the final days of Stalin there are timely warnings: societies become dysfunctional when decisions are driven by ideology; reality is not for leaders to invent, but should be based on evidence; and finally, leaders obsessed by conspiracy theories become the slave of dangerous paranoias. 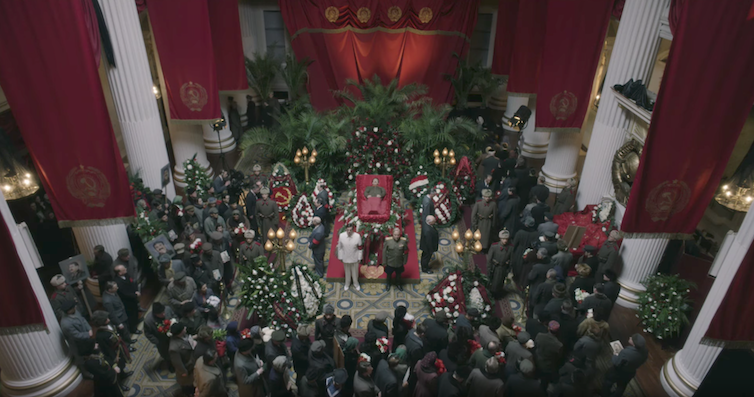 The Death of Stalin satirises the ten days after Josef Stalin suffered a stroke in 1953. Screenshot from Youtube

Putin’s Russia is probably further down the track of creating a dysfunctional state. State-owned media controls the news. While the Gulags have been abandoned, enemies of the regime meet untimely ends or are jailed on trumped up charges.

Perhaps most shocking is that in Putin’s Russia Stalin is no longer quite the villain he is elsewhere in the world. Putin describes Stalin as a “complex figure” and while accepting “the horrors of Stalinism,” he warns that “excessive demonization of Stalin is one of the ways Russia’s enemies attack it.”

As we remember the Russian Revolution, disturbing parallels can be drawn with the cult of personality and a new generation of populist leaders who are egocentric and intent on creating their own realities, built on conspiracies and reinforced by attacks on “fake news”.

The Death of Stalin will be released in Australia in March 2018.