We recently published a scientific report of octopuses living together in unusual numbers at a site on the south coast of New South Wales.

Then things got a little out of hand.

The gloomy octopus, named for large eyes that can give the animal a doleful appearance, is the most common local octopus in NSW waters. Octopus tetricus, to use its scientific name, has usually been thought of as a solitary animal, and that has been the stereotype associated with most octopus species for many years.

The recent discovery of a site in Jervis Bay, Australia where these octopuses gather in quite high numbers is challenging that perception, and revealing some striking behaviours.

The site consists of three rocky outcrops, around which octopuses have built up an extensive bed of discarded scallop shells, mixed with some human debris. 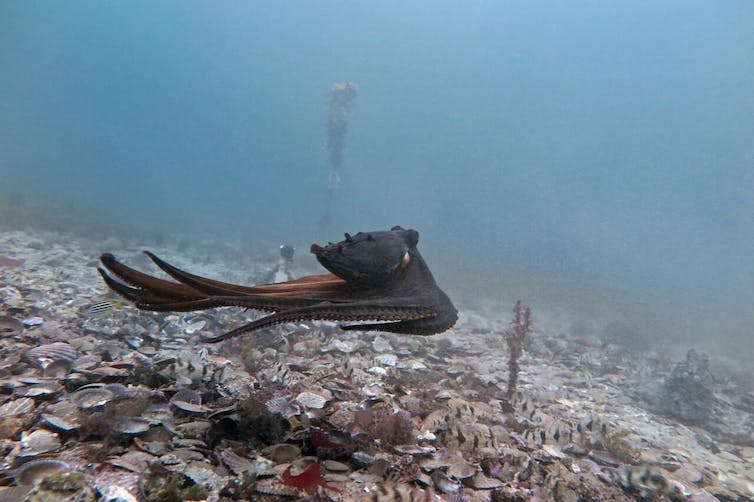 We think there is a process of “positive feedback” operating at the site. As scallops are brought back to the site to eat, the discarded shells provide material for additional octopuses to dig burrows. The shells line and stabilise the shaft-like dens. When the site was discovered in 2016, a total of 15 octopuses were present, along with several unoccupied dens.

This is the second site of its kind discovered. The first, reported in 2012, seems to have been formed around a discarded object, now very encrusted, of human origin.

The second site, which is entirely “natural,” shows that the same gathering of octopuses can occur without a “seeding” of the process by a human artefact.

At both sites, octopuses engage in quite complicated interactions – they produce displays, probe each other with their arms, and often try to evict other octopuses from their dens.

Other individuals of this species probably do live more solitary lives – when observed around Sydney, for example, they are almost always alone. This suggests that the octopuses have an ability to individually adapt their behaviour according to their circumstances.

In September 2017, our scientific report of the second site was published, written with our colleagues David Scheel, Stephanie Chancellor, Stefan Linquist, and Matt Lawrence.

This paper received a good deal of media attention, with initial stories fairly accurate. But they seem to have started a self-sustaining process of their own, especially as a couple of early reports used the term “city” in their title. For example: “Scientists discover an underwater city full of gloomy octopuses.” 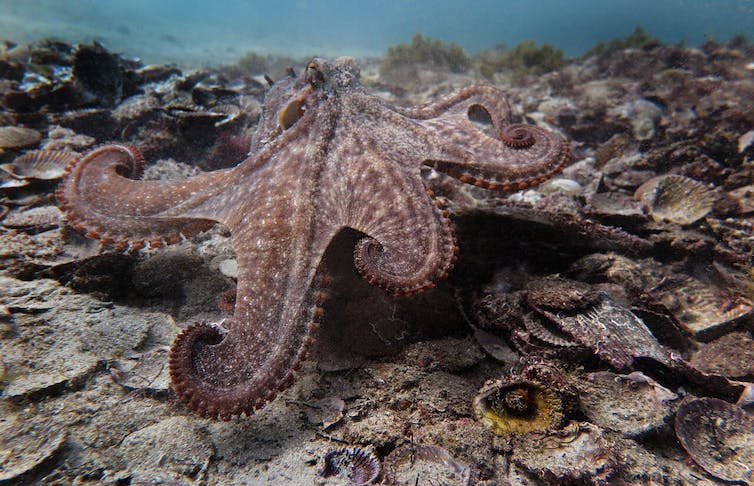 This was probably influenced by the nickname chosen for the site, “Octlantis,” though our article did not talk about “cities” or anything similar. Soon the authors were fielding interview requests from around the world, wanting more details of the hidden octopus city and the lives of its denizens.

New online articles about the site seemed to build successively on exaggerations made in earlier articles, until our octopuses were reported as making “art” and building “fences”.

Octlantis is not a city, and no artworks, fences, or buildings have been made. In an era of rapid and unconstrained circulation of information around the internet, often with important political ramifications, the buzz around Octlantis is a reminder of how quickly rumours can arise and feed off each other, generating a literature that becomes less and less accurate at each step.

The Octlantis site does raise interesting questions about what the octopuses intend to do, and which effects of their actions are entirely inadvertent. Questions of “intent” are very difficult in work on animal behaviour, but we think some distinctions can be made – provisionally at least – in these terms.

Octopuses collect scallops for use as food. This requires them to make excursions from their den and find their way home. They bring the scallops home to eat, we assume, because it is safer than eating in the open. They also dig dens in the shell bed, and sometimes arrange shells and other objects around the edge of their den.

It seems quite likely to us that the collection of scallops and the building and maintenance of dens are all intentional behaviours (in a low-key sense of that term). 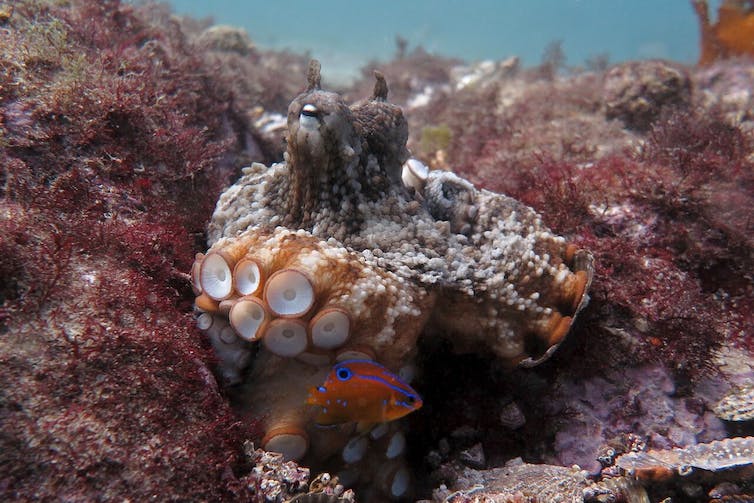 Dens are sometimes maintained with some care, and octopuses will expel debris either by carrying it away, or with use of their jet propulsion mechanism, the “siphon.” But this does not imply that octopuses have any inkling that when they bring scallops back to the site, they are improving the den-building possibilities for themselves or others. Those effects may be entirely inadvertent.

Work is continuing on these animals and their unusual homes. One interesting question is whether other octopus species behave like this in some circumstances.

Another is why we observe groups of gloomy octopuses at these particular sites, and not in other areas where a solid object has been placed on the sea floor in what looks like similar circumstances.

How many octopuses’ gardens are out there, waiting to be discovered?