In 1962, when I was a child caught in the crowd looking at the Treasures of Woburn Abbey exhibition at Sydney’s David Jones department store, a painting of a child spoke to me – Rembrandt’s portrait of his sister Elizabeth leaning against a gate. I marvelled at the way the paint defined the expression on her face and brush strokes shaped the gold of her hair. The beauty of the painting and the way the paint evoked both mood and form changed the way I saw the world.

Sydneysiders again have a rare opportunity to see a number of paintings and etchings by Rembrandt in Rembrandt & the Dutch Golden Age at the Art Gallery of New South Wales.

In 1962 it was enterprising fundraiser, the Duke of Bedford, who brought his work to Sydney. Crowds flocked to the exhibition as it gave the local population what they yearned for – the real presence of old master paintings, the kind of art that is seen in Europe, the US, and Melbourne – but never Sydney. 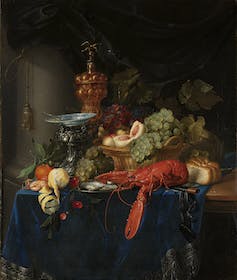 The National Gallery of Victoria has benefited from generous bequests and the work of Rembrandt scholar Dr Ursula Hoff, leading to several Rembrandt-inspired exhibitions visiting Australia, although none came to Sydney. With a restricted budget and more academic older collection, the the kind of curatorial partnerships that Melbourne does with ease were simply not available to the Art Gallery of New South Wales.

So it is very much to Michael Brand’s credit that as director of the NSW gallery he has forged close relationships with other art museums to consciously balance out the gaps in the collection. Two years ago he negotiated The Greats which exhibited some of the most significant works from the National Gallery of Scotland. Now it is the turn of the Dutch.

The art of merchants

It is impossible to walk through the exhibition without being aware of possible subtexts. The Dutch culture of the 17th century was predicated on trade, on the possession and accumulation of material wealth for conspicuous consumption.

Rembrandt & the Dutch Golden Age is an exhibition in part to promote and encourage visits to the Netherlands and the Rijksmuseum in Amsterdam, and also to remind the world of the material and cultural debt modern capitalism owes to those early world traders and explorers.

It is easy to draw parallels between the comfortable materialism and speculative behaviour of 17th century Holland and 21st century Australia. However, to see this solely as the celebration of the art of an acquisitive society flush with funds is to sell it short.

It does however begin with a room honouring the people – the black clad Protestant merchant class, who made sure their sober clothing was made of the finest fabric and decorated with exquisite lace. 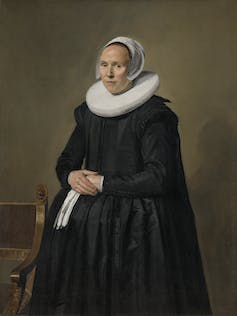 It is unfortunate that Frans Hals’ superb partner portraits of the merchant Lucas de Clercq and his wife are displayed separated by Jan de Bray’s large group portrait of the artist governors of the Guild of St Luke, Haarlem. The guilds worked as artists’ professional organisations, controlling training and ensuring that lucrative commissions only went to their members.

The exhibition progresses to the source of the merchants’ wealth – the Dutch mastery of the seas and the subsequent spice trade to the East Indies. Ludolf Bakhuizen’s Warships in a heavy storm evokes the power of the sea, the threatening clouds and the fragility of sail.

The painting that best summarises the Dutch attitude to its remote possessions is Aelbert Cuyp’s portrait, A senior merchant of the Dutch East India Company and his wife, in the background the fleet in the roads of Batavia. They dominate the foreground, protected from the heat by a Javanese servant who holds a parasol. He gestures with his stick to the distant (and therefore smaller) ships and harbor, his possessions. 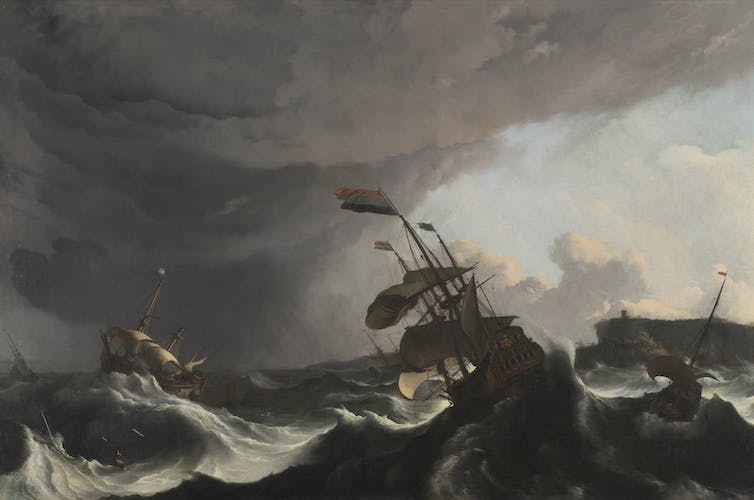 Ludolf Bakhuizen, Warships in a heavy storm c1695, oil on canvas, 150 x 227 cm. Rijksmuseum, purchased with the support of the Vereniging Rembrandt

Most Dutch did not travel so far, but their new affluence meant they could buy art. They lived in cities and valued small-scale paintings of landscapes with figures such as Jacob van Ruisdael’s Landscape with a waterfall, a work that implies the fierceness of nature, something to be admired from a distance.

This was a culture of city dwellers. Some were poor, as seen in Gabriel Metsu’s The herring-seller, contrasting youth and old age, with light and dark. Jan Steen’s The merry homecoming, which shows the return of a drunken boating party, manages to combine moral censure with comedy.

One of the great glories of Dutch art is Vermeer’s Woman reading a letter, and this painting alone is a reason to visit. It hangs in solitude, a small quiet piece of perfection. 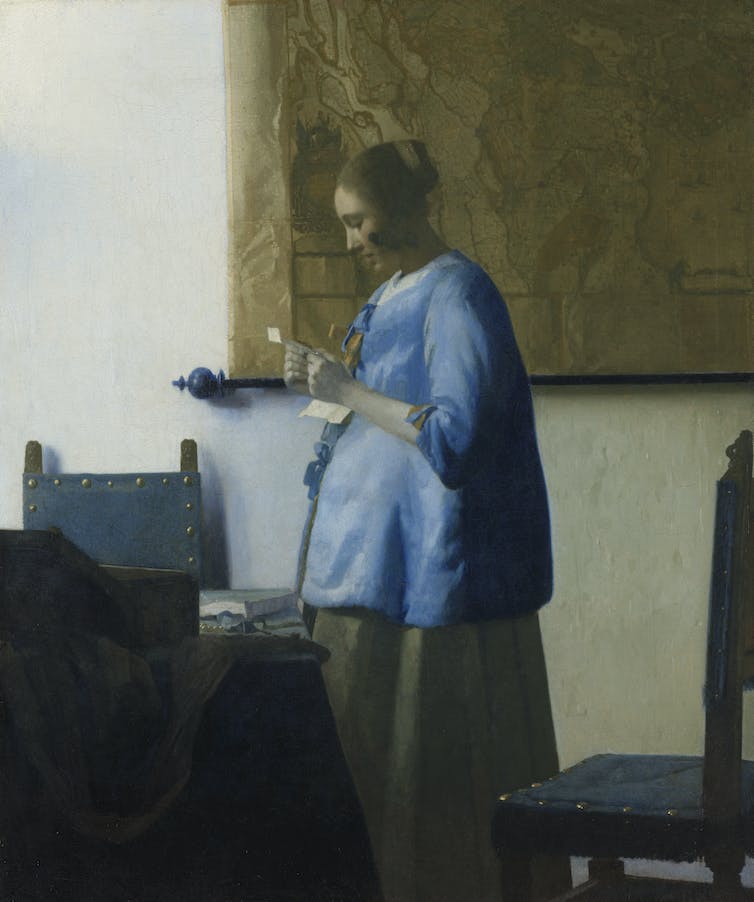 The painting is well known in reproduction, but the real thing tells the viewer more. As with all Vermeer’s work, Woman reading a letter appears at first to be deceptively simple – a young woman, possibly pregnant, painted in profile, mouth open, reading. Every element combines to create a sense of harmony.

The map hanging on the wall behind her is placed so as to create a Golden Section, that harmonious proportion first admired by the Greeks – but it also tells of a world beyond the domestic sphere where she may not go. The luminous blue of her jacket is echoed in the flesh tones of her arms as her hands grip the paper. That luminosity is heightened by the darker dulled blues of the chairs and map frame. The generous clean curves of her clothing and the light on her body is emphasised by the dark crumpled cloth in the foreground. It is a truly magnificent work of art.

The room dedicated to Rembrandt seems almost a lesser experience after looking at Vermeer. This is perhaps unfair as it is well installed and does give a sense of Rembrandt’s range from the early Two old men disputing, on loan from the National Gallery of Victoria, to the late interrogation of his Self-portrait as the Apostle Paul. 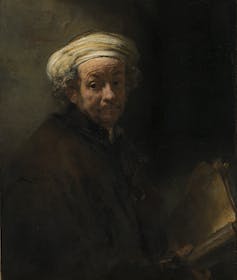 As he aged Rembrandt’s self-portraits became increasingly reflective. Paint shapes the form as his self-questioning face emerges from the dark. This is the only time Rembrandt painted himself as a Biblical figure, the sword and the manuscript identifying the subject as Paul. He shows the Apostle in prison, bars at the back, considering his life and work, awaiting his fate.

The exhibition includes a small selection of some of Rembrandt’s best known etchings, including two states of The three crosses, so that visitors can see how he gouged into the plate as he progressively darkened the Biblical narrative.

The power of great art

For all their culture of conspicuous consumption, the Dutch were aware of the fragility of life. The final room shows exquisite flower paintings and an opulent Still life with golden goblet by Pieter de Ring. The final word, however, goes to Aelbert Jansz van der Schoor’s Vanitas still life, a collection of skulls and bones, which is to be the fate of all. 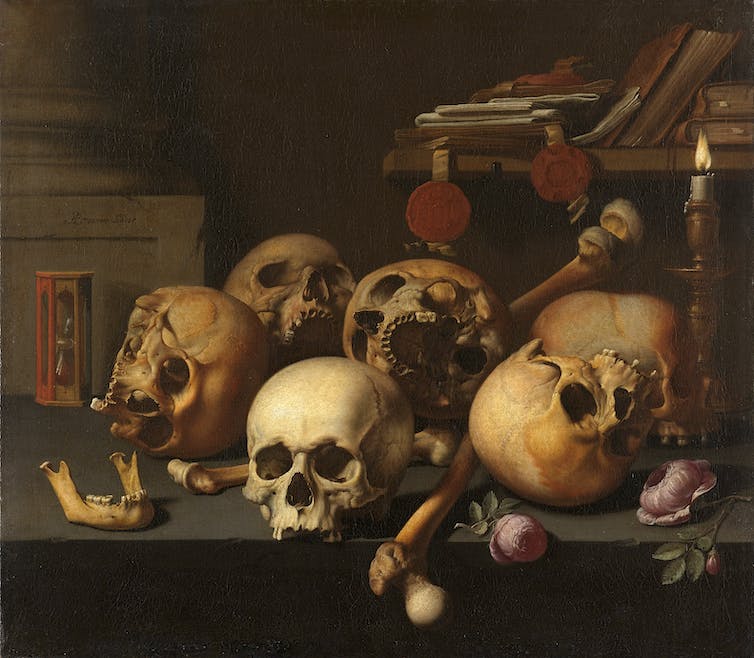 In purely transactional terms, exhibitions such as Rembrandt & the Dutch Golden Age are events of mutual benefit. The lender charges a significant fee as well as promoting their institution as a tourist destination, while holding a major event or exhibition makes the host a local tourist destination.

This is why Destinations NSW is the major sponsor for the Art Gallery of New South Wales’ summer exhibitions and why, at the exhibition opening, the Minister for the Arts, Don Harwin, described the benefit of this and other exhibitions as a tourist industry driven accumulator of wealth.

To see Rembrandt & the Dutch Golden Age as a lucrative adjunct to the tourism industry sells it short. The real value of great art is that individual works can reach out and make a lasting connection with the viewer so that suddenly the world is seen in a different way.

I hope that some of those who visit Rembrandt & the Dutch Golden Age this summer remember to take a child with them. Exposure to great art, painted on a human scale, may change the direction of her life, as it did mine in 1962.