The discovery of a planet with a highly elliptical orbit around an ancient star could help us understand more about how planetary systems form and evolve over time.

The new planet, HD76920b, is four times the mass of Jupiter. At its closest it skims the surface of its host star, HD76920. At its furthest, it orbits almost twice as far from its star as Earth does from the Sun. 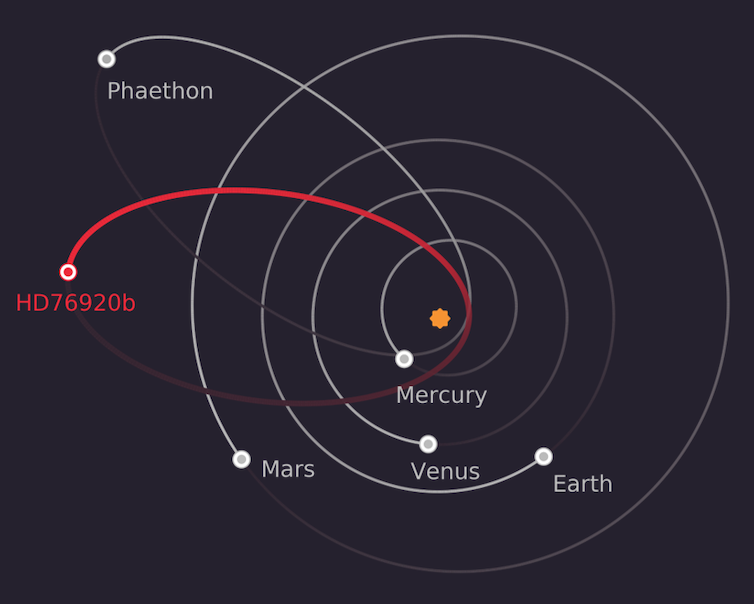 Superimposing HD76920b’s orbit on the Solar system shows how peculiar it is. Its orbit is more like that of the asteroid Phaethon than any of the Solar system’s planets. Jake Clark

Details of the planet and its discovery are published today. So how does this fit into the planet formation narrative, and are planets like it common in the cosmos?

Read more: A fleeting visit: an asteroid from another planetary system just shot past Earth

Before the first exoplanet discovery, our understanding of how planetary systems formed came from the only example we had at the time: our Solar system.

Scattered in their midst we have debris – comets, asteroids and the dwarf planets.

The eight planets move in almost circular orbits, close to the same plane. The bulk of the debris also lies close to that plane, although on orbits that are somewhat more eccentric and inclined.

How did this system form? The idea was that it coalesced from a disk of material surrounding the embyronic Sun. The colder outer reaches were rich in ices, while the hotter inner regions contained just dust and gas. 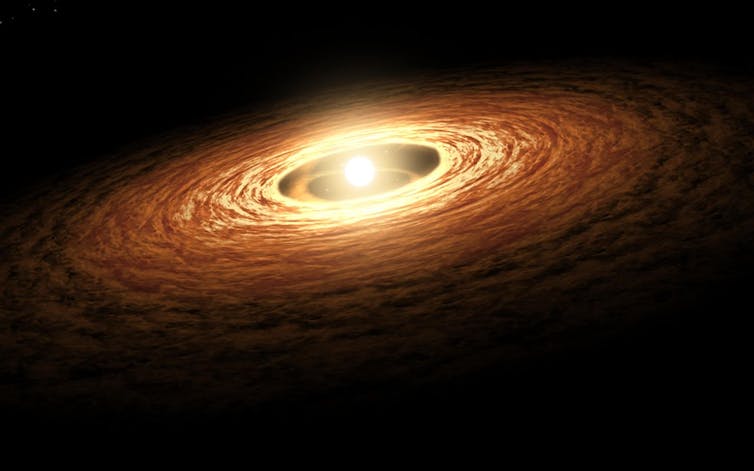 The Solar system formed from a protoplanetary disk, surrounding the young Sun. NASA/JPL-Caltech

Over millions of years, the tiny particles of dust and ice collided with one another, slowly building ever larger objects. In the icy depths of space, the giant planets grew rapidly. In the hot, rocky interior, growth was slower.

The first exoplanets, discovered in the 1990s, shattered this simple model of planet formation. We quickly learned that they are far more diverse than we could have possibly imagined.

Some systems feature giant planets, larger than Jupiter, orbiting incredibly close to their star. Others host eccentric, solitary worlds, with no companions to call their own. 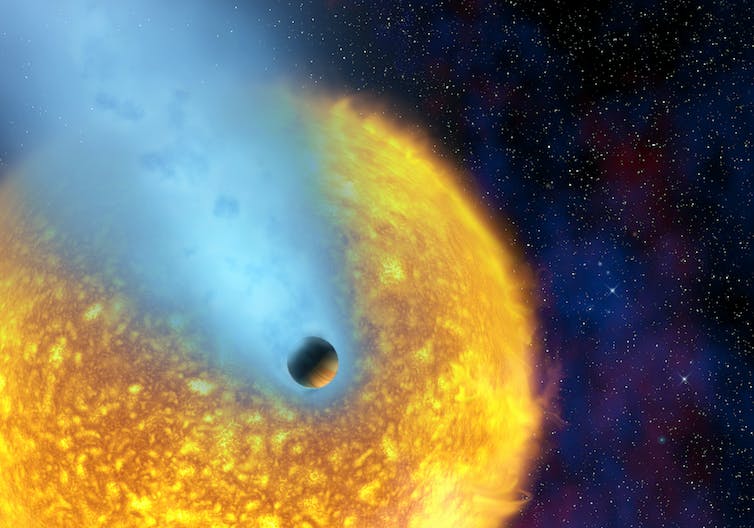 Artist’s impression of the Hot Jupiter HD209458b - a planet so close to its star that its atmosphere is evaporating to space. European Space Agency, A.Vidal-Madjar (Institut d'Astrophysique de Paris, CNRS, France) and NASA

This wealth of data reveals one thing – planet formation and evolution is more complicated and diverse than we ever imagined.

As a result of these discoveries, astronomers developed two competing models for planet formation.

The first is core accretion, where planets form gradually, through collisions between grains of dust and ice. The theory has grown out of our old models of Solar system formation.

The competing theory is dynamical instability. Once again, the story begins with a disk of material around a youthful star. But that disk is more massive, and becomes unstable under its own self-gravity, causing clumps to grow. These clumps rapidly form planets, in thousands of years.

Both models can explain some, but not all, of the newly discovered planets. Depending on the initial conditions around the star, it seems that both processes can occur.

How do you get an eccentric planet?

In the dynamical instability model you can easily get several clumps forming and interacting, slinging one another around until their orbits are both tilted and eccentric.

Under the core accretion model things are a bit harder, as this method naturally creates co-planar, ordered planetary systems. But over time those systems can become unstable.

One possible outcome is for one planet to eject the others through a series of chaotic encounters. That would naturally leave it as a solitary body, following a highly elongated orbit. 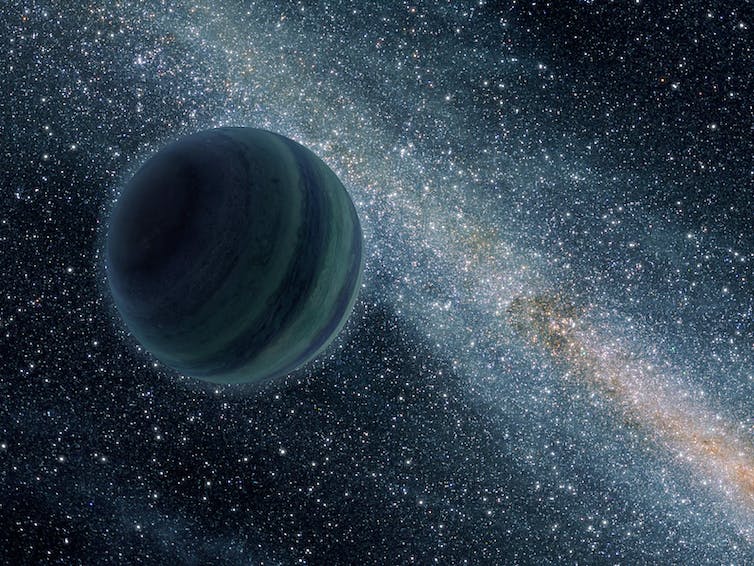 But there is another option. Many stars in our galaxy are binary – they have stellar companions. The interactions between a planet and its host star’s sibling could readily stir it up and eventually eject it, or place it on an extreme orbit.

This brings us to our newly discovered world, HD76920b. A handful of similarly eccentric worlds have been found before, but HD76920b is unique. It orbits an ancient star, more than two billion years older than the Sun.

The orbit HD76920b is following is not tenable in the long-term. As it swings close to its host star, it will experience dramatic tides.

A gaseous planet, HD76920b will change shape as it swings past its star, stretched by its enormous gravity. Those tides will be far greater than any we experience on Earth.

That tidal interaction will act over time to circularise the planet’s orbit. The point of closest approach to the star will remain unchanged, but the most distant point will gradually be dragged closer in, driving the orbit towards circularity.

All of this suggests that HD76920b cannot have occupied its current orbit since its birth. If that were the case, the orbit would have circularised aeons ago. 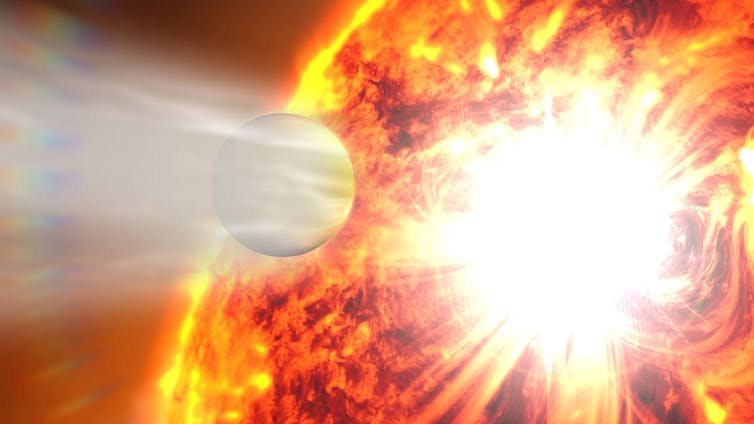 Extremely eccentric planets have been discovered before, but this is the first around such an ancient star. Goddard Space Flight Center/NASA

Perhaps what we’re seeing is evidence of a planetary system gone rogue. A system that once contained several planets on circular (or near circular) orbits.

Over time, those planets nudged one another around, eventually hitting a chaotic architecture as their star evolved. The result – chaos – with most planets scattered and flung to the depths of space leaving just one – HD76920b.

The truth is, we just don’t know – yet. As is always the case in astronomy, more observations are needed to truly understand the life story of this peculiar planet.

One thing we do know is the story is coming to a fiery end. In the next few million years, the star will swell, devouring its final planet. Then, HD76920b will be no more.