Educators and students often struggle to learn from each other through the use of feedback. Our research into feedback practices has found that students and staff find feedback practices largely unsustainable, de-motivating and without opportunity for improvement.

The 2015 Graduate Course Experience surveyed over 93,000 students within four months of their graduation. It reported that while close to three quarters of graduates felt the feedback they received was helpful, 16.3% could not decide if the feedback was helpful, while a further 9.7% found the feedback unhelpful. Clearly something is wrong when a quarter of our graduates indicate feedback is not working.

The Australian Government funded Feedback for Learning project surveyed 4,514 students and 406 staff across two universities. It revealed that while students are generally satisfied with their feedback, there are a number of cohorts, or practices, that need attention. 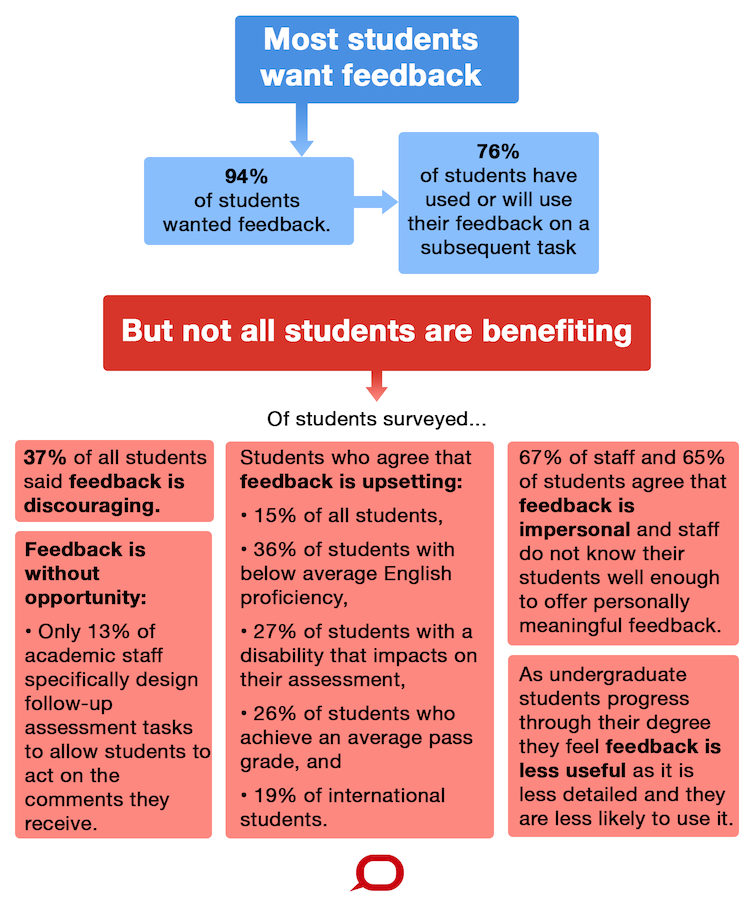 Author provided/The Conversation, CC BY-ND Feedback underpins students’ effective decision making, and is the basis for improving learning outcomes. Despite heavy financial investment by universities, student experience of feedback continues to be less than desirable, especially for already “at risk” students. Many academics operate with misconceptions about feedback that inadvertently add to the problem. If we are to improve we need to seek out best practices and gain a clearer vision of what feedback should be. Feedback is not ‘given to’ or ‘done to’ the learner In higher education, the concept of feedback is commonly misunderstood. For example, many academics and students assume that feedback is a one-way flow of information, which happens after assessment submission and is isolated from any other event. In addition, academics and students often feel that the role of feedback is merely to justify the grade. A further misunderstanding is that feedback is something that is done by academics and given to students. These beliefs are deeply held in academic culture. In contrast, leading researchers in the field argue that feedback is not a simple input. Instead, it is a process in which information about the quality of a student’s performance is engaged with by the student, and leads to a change in future work or learning strategies. Ultimately, academics need not be involved at all. The shift from a teacher-centred perspective also provides a valuable opportunity to re-position the academic as just one actor within the feedback process. Indeed, feedback comments can be from, and instigated by, a variety of sources, including the evaluator, peers, and the learner. Feedback must have impact 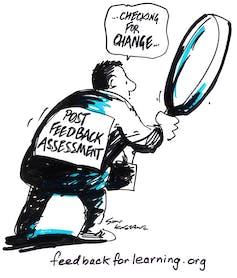 Effective feedback practices require us to look for impact. Author provided, CC BY-ND In contexts other than education, such as technology or biology, feedback is not an input but rather a process within a system. For example, if a blood vessel is damaged, platelets cling to the injured site and release chemicals that attract more platelets, eventually forming a blood clot. In this system, feedback regulates or optimises the output. Applying this metaphor to higher education, feedback can be usefully understood as a process within our complex teaching and learning system, rather than something that needs to be given to an actor in the system. Under these circumstances, feedback can be identified by its regulating effect or impact. With this in mind, Boud and Molloy argue that assessment feedback also should be seen to require some action or change to occur. In other words, any information without effect is just information. Anything else is a waste of our time. Feedback should come before submission Feedback is a process in which information about the quality of a performance leads to a change in student work or learning strategies. Arguably, for the most useful impact, feedback should occur prior to the final submission of assessment. This means we are challenged with finding ways to elicit student performance early, and to facilitate feedback that then leads to improved submissions In response to this, we might consider carefully designing a series of assessments that are connected by well-planned feedback. However, it is useful to note that the initial performance does not need to be the submission of assessment - it could be in the form of a variety of tasks that expose the student’s understanding or skills that may elicit feedback from a variety of sources. Feedback as teaching For many students, the experience of teacher-led feedback is underwhelming or negative, and they are effectively left to their own devices. In other words, many students learn despite us. However, feedback is arguably the most important form of interaction we can muster as teachers. Effective feedback requires us to seek out and judge the qualities of student performance, and to craft information and responses to have an impact. In addition, we need to find ways to monitor the impact of those interactions. Most educators agree that feedback is potentially valuable. However, there is considerable push-back at the thought of greater investment in feedback practices, because it adds to an academic’s already heavy workload. This response is understandable if we persist with the assumptions that feedback is something we “give” to students as a secondary practice of, and costed in relation to, assessment grading. A counter-argument is that we need to re-conceive of feedback in higher education to be a form of teaching just as important as lectures and tutorials. Feedback also doesn’t need to be teacher-centred. Peer, self and automated systems of feedback are well recognised as sustainable models. Feedback design 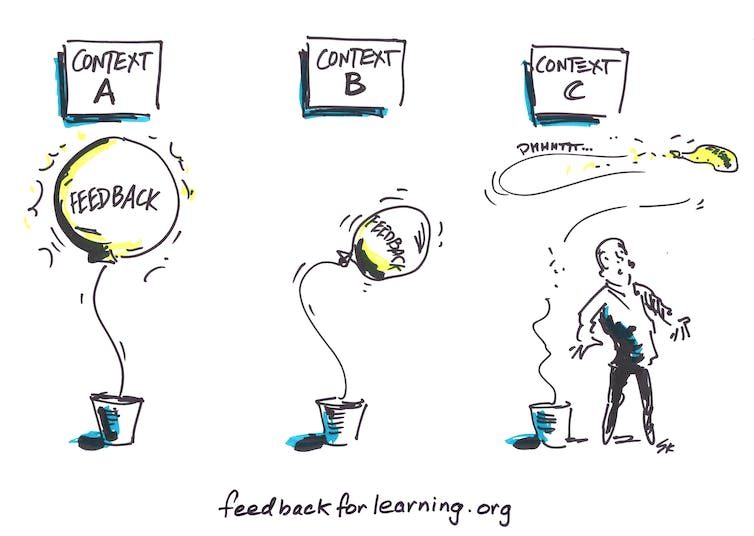 Feedback practices generally can’t be replicated across all contexts. Author provided, CC BY-ND While there is a growing body of literature surrounding feedback, there continues to be little agreement on the best approach. Certainly, there is no single feedback strategy or model that has been shown to work across all contexts. This is a significant problem for the higher education sector. The way teachers, students and institutions interact vary in every instance. This includes policy, workload pressures, academic and student culture, and other broader socio-political issues that can significantly influence what might otherwise be regarded as effective feedback strategies. It is no wonder that simple strategies of feedback cannot be replicated successfully from one context to another. This leaves us with a simple but frustrating truth – every educator needs to engage in feedback practices with an inquiring mind, prepared for repeated development of their own practices.