Nathan is a young man who enjoys his life and is doing well by anybody’s standards. He studied drama, ancient history and English at school. He is a motivational speaker and has a part-time job at a radio station. He is buying his own home.

Australia has some of the poorest labour market outcomes for people with disability in the OECD. A 2010 report found employment rates of people with health problems or disability were at 40%, and falling. Almost one in two (45%) lived in poverty, compared to an OECD average of 22%.

Australia needs policies that capitalise on the strengths of people with disability rather than simply helping them “overcome” limitations.

A lifetime of disadvantage

The cards are stacked against people with disability from the get go. People with any disabilities – not just those with intellectual disability – are less likely to finish high school. 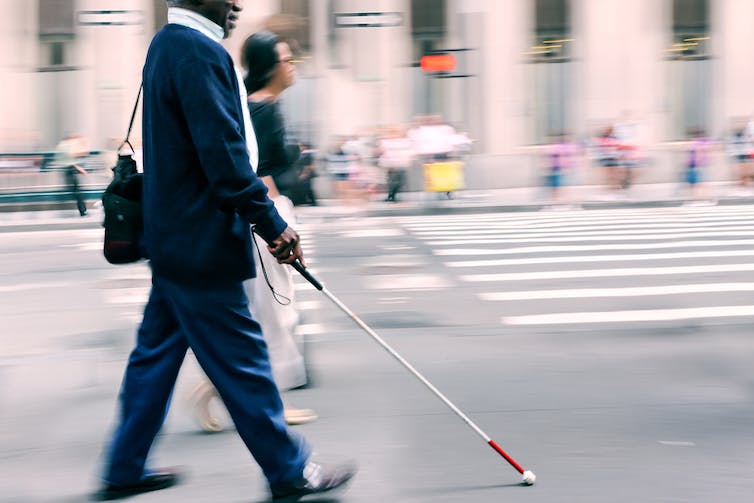 Acquiring a disability can shift someone into socioeconomic disadvantage. from shutterstock.com

We know being included is critical for the health and well-being of all children. But children and teenagers with a disability are more likely to be bullied at school, less likely to participate in team sports and have fewer intimate friendships.

Poorer educational outcomes such as these have lifelong ramifications. They reduce the possibility of making a successful transition out of school to further education and training, or employment. This lack of participation in the economy constrains the potential to form meaningful relationships and leads to poverty, housing stress and homelessness. The scene is set for a lifetime of disadvantage.

Being disadvantaged is, of course, bad for your health. Disadvantage increases your risk of pretty much everything including most cancers, diabetes, heart disease, and mental health.

Research shows economic inactivity and under-employment are detrimental to people’s mental health. While factors such as being wealthy, and having affordable housing and social support help reduce the negative mental health effects of disability.

While many disabilities, such as Nathan’s, begin at birth, most are acquired later in life through accidents or injury. Some chronic conditions, such as multiple sclerosis, also tend to present later in life.

When adults acquire a disability, they may already have completed education and training and be employed. But even then, the diagnosis can shift someone into socioeconomic disadvantage. People might lose their job, reduce their work hours or move into a lower skilled job.

Some reductions in economic participation may be due to limitations related to people’s impairments. But it’s clear many people with disability experience discrimination in getting and maintaining meaningful employment and career progression. 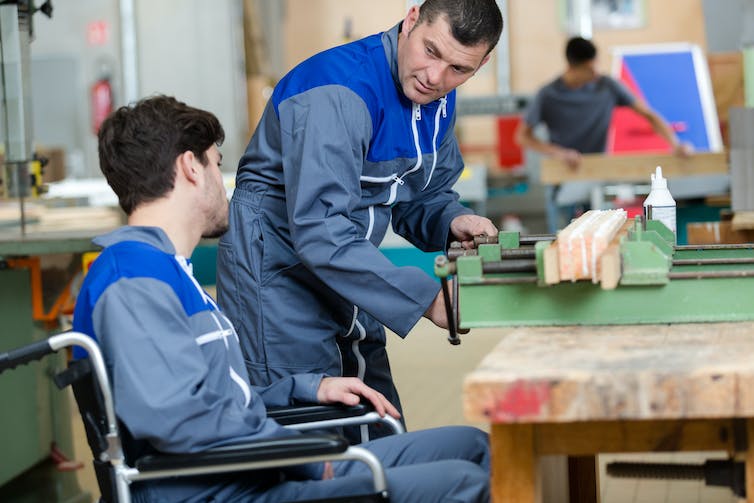 Work environments should be made to enable participation. www.shutterstock.com

Most policy documents and strategies to improve the lives of people with disability, such as the National Disability Strategy, focus on “adaptions” to enable mainstream participation such as ramps, captioning on visual materials, and hearing loops on public transport. These are important, but radical, transformational change is also needed.

We need to see opportunities that disability brings. For instance, companies such as Microsoft are deliberately recruiting people with autism who have enhanced abilities to see patterns and pick up mistakes faster and more accurately than their peers.

Human rights lawyer Elise Roy, who has been deaf since the age of ten, says losing her hearing “was one of the greatest gifts I’ve ever received”. It enabled her to create design solutions others literally couldn’t see. It also made her a great soccer goalie as her highly developed visual senses meant she could “see” and read the pitch in ways hearing goalies could not.