You have to get more than a bit mad to single-handedly launch a campaign against inequality. At a recent forum, visual artist Elvis Richardson wryly described how anger was the catalyst that sparked her to start CoUNTess, a blog that assembles and reviews data on gender representation in Australia’s contemporary art scene. 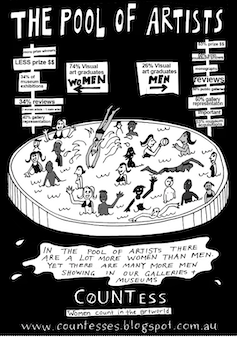 Since 2008, Richardson has analysed the gender breakdown of who gets exhibited, collected, reviewed and rewarded. Converting indignation into statistics and emotion into hard facts, her blog provides irrefutable evidence that gender bias is an ongoing problem besetting the visual arts.

The most current snapshot illustrates that only 34% of the artists shown in state museums are women. In commercial galleries, the proportion is 40%. In the art media, 34% of feature articles and reviews are about women, but 80% of magazine covers are dedicated to male artists.

Change needs to be embraced at every level, not least in developing art curriculum in secondary schools. Victorian students who sat their final Studio Art exam last week were given 14 images to write about, of which only one was produced by a woman. A cursory survey of exams in previous years and other states suggests such bias is entrenched.

Over the past decade, the gatekeepers of the Australian art scene have started responding to the unconscious bias Richardson documents. When comparing the graphs and charts in her old posts with the 2016 CoUNTess Report, it is possible to identify small improvements. Still, as Richardson says in her report introduction:

The closer an artist gets to money, prestige and power the more likely they are to be male.

A recent study by David Throsby and Katya Petetskaya also shows the gender pay gap is substantial in the Australian art scene.

Further reading: The gender pay gap is wider in the arts than in other industries

The 2016 CoUNTess Report was made possible with support from the Cruthers Art Foundation. This organisation is making a substantial contribution towards rebalancing the statistics via the Cruthers Collection of Women’s Art, the only dedicated public collection of art by Australian women.

Begun in 1974 as a private family collection acquiring women’s art, the collection consists primarily of portraiture, self portraiture and art that is focused on still life, abstraction, early postmodernism and second wave feminism. 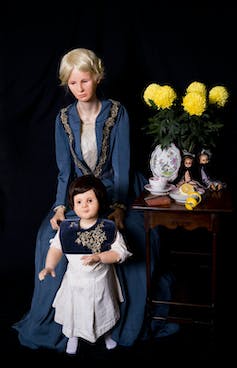 The collection was gifted to the University of Western Australia in 2007 and is housed at Lawrence Wilson Art Gallery. Cruthers curator Gemma Weston believes the collection plays a role in valuing and making visible the work of women artists, which in turn can provide a pathway to its acceptance in the institutional domain. Individual works are often loaned to other art museums around Australia.

Weston identifies visibility as a key factor in determining what gets collected and how an artist gets traction in her career. She says institutional recognition is a long and complicated process of gathering momentum, which often begins with the private collector rather than the art museum.

There is no doubt that all-women collections and exhibitions can help to change the depressing statistics assembled by Richardson. There is concern, however, that this strategy can cause ghettoisation.

Weston is conscious of this conundrum. Cruthers’ current show Country and Colony moves beyond the concerns of previous exhibitions to document “women’s art” and “women’s issues” through biography, autobiography and portraiture.

While gender and feminist politics are a subtext, Colony and Country profiles new acquisitions that deal with the fraught history of colonialism. The paintings, prints and objects by Indigenous and non-Indigenous artists tell stories about land, landscape, the body, industry and culture. 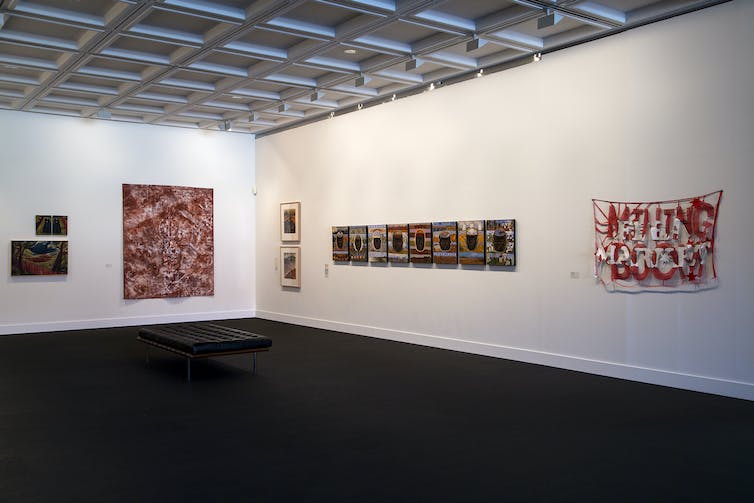 While the speed of change appears glacial, the momentum to overcome structural inequality for female artists appears to be building. In September, 11 top gallery directors, curators and arts organisation chiefs in the UK united in a call for greater representation of female artists.

A month later, possibly encouraged by the fall of the American movie producer Harvey Weinstein, the call-out of sexist and abusive behaviour in cultural industries spread to the visual arts. Numerous sexual harassment allegations were made against powerful and prominent gatekeeper, Artforum co-publisher Knight Landesman.

Landesman’s resignation from the international art publication has prompted many more women to come forward with stories about his alleged behaviour. An open letter written by women in the art world, “We are not surprised”, has morphed into a larger campaign linking abuse of power with structural inequality.

By providing a graphic illustration of inequality, Richardson’s CoUNTess project has done much to bring the issue into view in Australia. Together with Weston’s thoughtful management and curation, the Cruthers Collection of Women’s Art is another important step in changing the status quo. Many arts organisations and individuals who have the capacity to bring about change have started counting and making an effort to rectify the imbalance.

Yet when part of the cost of overlooking structural inequality is sexual harassment it is time for more decisive action. While extreme examples of sexual misconduct have not (yet) been exposed in Australia, demeaning behaviour is regularly meted out by the art scene gatekeepers. There are also anecdotal stories of grooming and sexual advances by powerful male gatekeepers. At present, few speak up because they fear damaging their career prospects.

The CoUNTess Report recommends that “stakeholders in the Australian visual art sector routinely collect, analyse and publish gender representation data and use it to inform their policy decisions”.

A rebalance of gender representation will only occur if all institutions that have a role in shaping the value of artists’ work start counting.

As in the tertiary sector, many more girls than boys study art at school. In Victoria, for example, 73% of the cohort who completed Studio Art in 2016 were girls. Unless there is significant improvement, why would future generations of women pursue a career in the visual arts?

Country and Colony runs until December 16 2017.