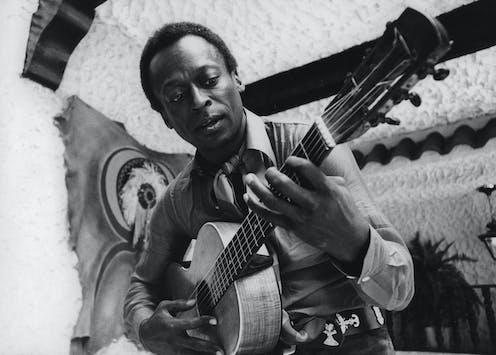 Great records do not necessarily arise out of historical ruptures. Nonetheless, Miles Davis’s A Tribute to Jack Johnson is significant in jazz and rock history if only for having the audacity to disrupt both so radically. It is perhaps Davis’s best album from an early 1970s period when he was tearing down the genre walls erected in audience’s minds.

The album was Davis’s second stab at a soundtrack, after Elevator to the Gallows in 1958. Jack Johnson is a documentary about the first African-American boxer to become world heavyweight champion. The film was nominated for an Academy Award in 1971. The associated album, released the same year, passed largely unnoticed, not helped by Columbia Records putting the wrong image on the cover.

In his 2004 book So What: The Life of Miles Davis, biographer John Szwed notes how Davis began avoiding the term jazz as early as 1968, preferring to see his work simply as music. At the same time, he was becoming more interested in the sounds of the emerging counterculture. As well as incorporating non-Western and avant-classical aspects into his sound, Davis was coming under the influence of rock performers like Jimi Hendrix, James Brown and Sly Stone.

According to guitarist McLaughlin, Right Off, the first of two side-long tracks, began as an improvisation he set off while waiting around in the studio. Davis scampered out from the recording booth to join in at precisely 2:20. What resulted was 27 minutes of collective innovation that bulldozes over accepted jazz ideals of individual virtuosity.

Right Off is a strutting, swaying, jabbing piece – an electrified melange of blues, funk and soul. Uninhibited by limitations of genre, here Davis and his crew were blazing a trail way in advance of the clotted radicalism of much jazz and rock.

Yesternow – side two of the original LP – is different; a pensive, near-ambient soundscape. Robert Christgau of The Village Voice called Yesternow “mood music for a vacation on the moon”, which neatly captures its exotic drift.

In the liner notes to his 1982 record On Land (another perennial favourite in this house), Brian Eno praises the “spacious quality” of He Loved Him Madly, Davis’s 1974 elegy to Duke Ellington. A wobbly line can be drawn from 1969’s In A Silent Way through Yesternow to He Loved Him Madly, and the influence of these revolutionary works upon Eno and myriad other unconventional artists is palpable.

The notes Davis penned for Jack Johnson hint at his own growing sense of marginalisation: “And of course being born Black in America … we all know how that goes.” With Richard Nixon in the White House, Vietnam in meltdown and the Kent and Jackson State massacres fresh in the mind, these were troubled times in America. Davis himself was lucky not to be seriously hurt in a drive-by shooting, which ended in his being arrested.

This record likewise sits at the margins. Today, most critics continue to couch their favoured styles – jazz, rock, folk, classical – in sentimental terms, invoking static rather than evolving forms. Jack Johnson, too rock-inflected for jazz, too jazz-like for rock, sails far beyond such closed narratives.

The significance of Davis to the jazz tradition culminates around the time of his 1959 album Kind of Blue. In recent years, conservative commentators, of whom fellow trumpeter Wynton Marsalis is the most prominent, have attempted to erase iconoclasts like Davis and Ornette Coleman from that genre’s later history. For the average jazz purist, Jack Johnson is merely further proof that Davis sold out to rock.

Yet rock’s dominant Anglo-American canon is just as reductive as its jazz counterpart. For instance, in his recent book 1971: Never a Dull Moment (subtitled Rock’s Golden Year), David Hepworth somehow excludes Jack Johnson from a list of 100 albums that supposedly confirm 1971 as “the annus mirabilis of rock music”. Absurdly, rock critics have adopted Kind of Blue into their mainstream canon while ignoring the likes of Jack Johnson.

In truth, selecting a single “favourite” album from the colossal ocean of recorded music now available can seem perversely limiting. On another day I might have chosen PJ Harvey’s Stories of the City, Stories of the Sea, Laurie Anderson’s United States Live, Triosk’s Headlight Serenade, Dead C’s Future Artists, Neil Young’s Rust Never Sleeps, The Indestructible Beat of Soweto, The Anthology of American Folk Music, or any one of dozens of other contenders.

But perhaps Jack Johnson is an apt choice: an album that reminds how we occupy a fluid, ever-evolving sound world, where favourites already heard compete with others still to be discovered. Or, as Davis himself warned: “They’ll be messed up on that bogus nostalgia thing.”