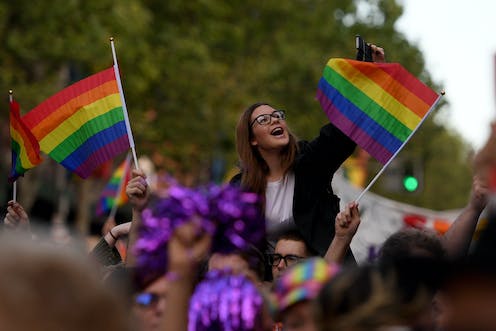 It took a long time, but on Thursday Australia became the 26th country to achieve marriage equality.

The LGBTI community is euphoric and relieved with this hard-fought victory. But there is also trauma from the drawn-out postal survey campaign, which saw attacks on rainbow families and communities. It left many feeling vulnerable and distressed. In some cases, it brought back painful memories of the bullying and abuse they were subjected to in their adolescence.

But once the celebrations from Australia achieving marriage equality have subsided, the fight for LGBTI people to live lives free from discrimination will continue.

Marriage equality has passed, so what’s next?

A long way to go

The focus recently has, understandably, been on achieving marriage equality. However, it’s important to recognise that this accomplishment does not mean that LGBTI people enjoy all of the same human rights as heterosexual people.

Australian law has not yet caught up with the reality of modern families. Children in LGBTI families may have more than two parents: a lesbian couple may have a child with the assistance of a gay couple, for instance, and all four parents may be actively involved in raising the child.

In contrast to Canada, which allows birth certificates to record up to four parents, Australia allows only two parents to be recorded. This means that this pivotal identity document may not accurately reflect a child’s family structure.

Another issue that can now receive greater attention is the ongoing use of conversion therapies to “cure” a person’s same-sex attraction. These harmful practices appear to have gone underground, but are actually more prevalent in Australia than ever before.

Conversion therapies have been condemned by the medical profession as harmful and ineffective, and by the UN as a breach of human rights. Nevertheless they continue in Australia.

In 2016, the Victorian government established a commissioner to investigate and ban unregistered health practitioners who claim to be able to convert same-sex-attracted people. However, the Health Complaints Commissioner does not have the power to examine faith-based organisations engaging in such practices, which limits this initiative’s effectiveness.

In the US, however, several states and cities have enacted legislation to ban conversion therapy – either for minors, or, in the case of New York City, for adults as well.

Additionally, a case in the state of New Jersey against a Jewish counselling group culminated in a decision that the group had committed consumer fraud when it promised to change a person’s same-sex attraction into opposite-sex attraction, and was held liable to pay damages.

As it stands, religious bodies are allowed to discriminate against a person on the basis of their sexual orientation. The impact of such exemptions were recently illustrated when a teacher at a Baptist school in Western Australia was lawfully sacked for being gay.

Another issue that has received little attention is the ongoing practice of subjecting intersex infants to surgical or hormonal interventions to “fix” their sex to appear male or female. Advocates are calling for such medical interventions to be banned unless there is freely given and fully informed consent.

Advocacy on the world stage

Australia achieving marriage equality will also help improve our human rights reputation on the international stage – which is in desperate need of help.

At its UN Human Rights Council periodic review in 2016, several countries recommended that Australia amend its laws to allow same-sex couples to marry.

Australia should also lend its support to persecuted LGBTI people in other parts of the world. This includes in the Asia-Pacific region, where 19 countries criminalise homosexuality. As Martin Luther King said:

Injustice anywhere is a threat to justice everywhere.

Further reading: How the same-sex marriage vote will impact on human rights and democracy

We should celebrate and enjoy the fact that Australia finally has marriage equality. But it is by no means the end of the road when it comes to the law reform necessary to enable LGBTI people to enjoy lives of dignity and equality.

Birth certificates that accurately reflect a child’s family, bans on conversion therapies, removal of religious exemptions from anti-discrimination legislation, and prohibitions on surgeries to “normalise” an intersex infant’s genitalia are just some of the issues that need to be fixed before Australia’s LGBTI community can fully enjoy their human rights.