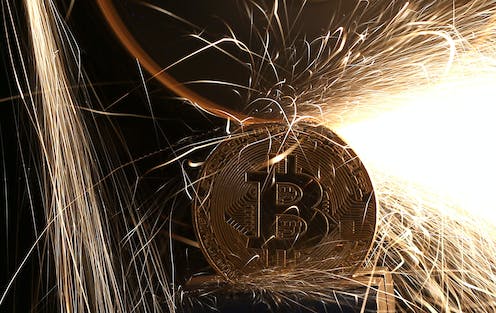 The recent upsurge in the price of Bitcoin seems to have finally awakened the world to the massively destructive environmental consequences of this bubble.

These consequences were pointed out as long ago as 2013 by Australian sustainability analyst and entrepreneur Guy Lane, executive director of the Long Future Foundation. In recent months, the Bitcoin bubble has got massively bigger and the associated waste of energy is now much more widely recognised.

In essence, the creation of a new Bitcoin requires the performance of a complex calculation that has no value except to show that it has been done. The crucial feature, as is common in cryptography, is that the calculation in question is very hard to perform but easy to verify once it’s done.

At present, the most widely used estimate of the energy required to “mine” Bitcoins is comparable to the electricity usage of New Zealand, but this is probably an underestimate. If allowed to continue unchecked in our current energy-constrained, climate-threatened world, Bitcoin mining will become an environmental disaster.

The rising energy demands of Bitcoin

In the early days of Bitcoin, the necessary computations could be performed on ordinary personal computers.

But now, “miners” use purpose-built machines optimised for the particular algorithms used by Bitcoin. With these machines, the primary cost of the system is the electricity used to run it. That means, of course, that the only way to be profitable as a Bitcoin miner is to have access to the cheapest possible electricity.

Most of the time that means electricity generated by burning cheap coal in old plants, where the capital costs have long been written off. Bitcoin mining today is concentrated in China, which still relies heavily on coal.

Even in a large grid, with multiple sources of electricity, Bitcoin mining effectively adds to the demand for coal-fired power. Bitcoin computers run continuously, so they constitute a “baseload” demand, which matches the supply characteristics of coal.

More generally, even in a process of transition to renewables, any increase in electricity demand at the margin may be regarded as slowing the pace at which the dirtiest coal-fired plants can be shut down. So Bitcoin mining is effectively slowing our progress towards a clean energy transition - right at the very moment we need to be accelerating.

How much energy is Bitcoin using?

A widely used estimate by Digiconomist suggests that the Bitcoin network currently uses around 30 terawatt-hours (TWh) a year, or 0.1% of total world consumption – more than the individual energy use of more than 150 countries.

By contrast, in his 2013 analysis, Guy Lane estimated that a Bitcoin price of US$10,000 would see that energy use figure climb to 80 TWh. If the current high price is sustained for any length of time, Lane’s estimate will be closer to the mark, and perhaps even conservative.

The cost of electricity is around 5c per kilowatt-hour for industrial-scale users. Miners with higher costs have mostly gone out of business.

As a first approximation, Bitcoin miners will spend resources (nearly all electricity) equal to the price of a new Bitcoin. However, to be conservative, let’s assume that only 75% of the cost of Bitcoin mining arises from electricity.

Assuming an electricity price of 5c per kWh and a Bitcoin price of US$10,000, this means that each Bitcoin consumes about 150 megawatt-hours of electricity. Under current rules, the settings for Bitcoin allow the mining of 1,800 Bitcoins a day, implying daily use of 24,000MWh or an annual rate of nearly 100TWh – about 0.3% of all global electricity use.

Roughly speaking, each MWh of coal-fired electricity generation is associated with a tonne of carbon dioxide emissions, so a terawatt-hour corresponds to a million tonnes of CO₂.

So much energy, so few users

An obvious comparison is with the existing financial system.

Digiconomics estimated that Visa is massively more efficient in processing transactions. A supporter of Bitcoin, Carlos Domingo, hit back with a calculation suggesting that the entire global financial system uses about 100TWh per year, or three times as much as the Diginconomics estimate for Bitcoin.

As a defence, this is far from impressive. First, as we’ve seen, if the current high price is sustained, total annual energy use from Bitcoin mining is also likely to rise to 100TWh.

More importantly, the global financial system serves the entire world. By contrast, the number of active Bitcoin investors has been estimated at 3 million, or around 0.5% of the world’s population. Almost all of these people are pure speculators, holding Bitcoin as an asset while using the standard financial system for all of their private and business transactions.

Another group is believed to use Bitcoin for illicit purposes such as drug dealing or money laundering, before converting these funds into their own national currency. The number of people who routinely use Bitcoin as a currency for legitimate transactions might be in the low thousands or perhaps even fewer.

Shifting the whole global financial system to Bitcoin would require at least a 200-fold increase, which in turn would entail increasing the the world’s electricity use by around 500%. With the current threat of climate change looming large globally - this constitutes an unthinkably large amount of energy consumption.

The disastrous nature of Bitcoin’s energy consumption should not lead us to abandon the associated idea of blockchain technology altogether.

There are alternatives to the “proof of work” method of validating changes to the blockchain, such as “proof of importance”, which is analogous to Google’s page ranking systems. Projects such as Gridcoin are based on calculations that are actually useful to science. But these ideas are in their infancy.

For the moment, the problem is Bitcoin and how to deal with it. There is no obvious way to fix the inherent problems in its design. The sooner this collective delusion comes to an end, the better.