There’s no doubt that humans killed off the Tasmanian tiger. But a new genetic analysis suggests this species had been on the decline for millennia before humans arrived to drive them to extinction.

The Tasmanian tiger, also known as the thylacine, was unique. It was the largest marsupial predator that survived into recent times. Sadly it was hunted to extinction in the wild, and the last known Tasmanian tiger died in captivity in 1936.

In a paper published in Nature Ecology and Evolution today, my colleagues and I piece together its entire genetic sequence for the first time. It tells us that thylacines’ genetic health had been declining for many millennia before they first encountered human hunters.

Read more: Will we hunt dingoes to the brink like the Tasmanian tiger? 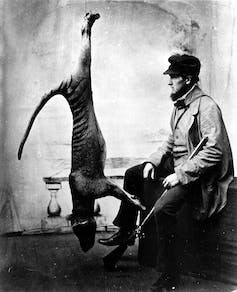 Our research also offered the chance to study the origins of the similarity in body shape between the thylacine and dogs. The two are almost identical, despite having last shared a common ancestor more than 160 million years ago – a remarkable example of so-called “convergent evolution”.

Decoding the thylacine genome allowed us to ask the question: if two animals develop an identical body shape, do they also show identical changes in their DNA?

These questions were previously difficult to answer. The age and storage conditions of existing specimens meant that most thylacine specimens have DNA that is highly fragmented into very short segments, which are not suitable for piecing together the entire genome.

We identified a 109-year-old specimen of a young pouch thylacine in the Museums Victoria collection, which had much more intact DNA than other specimens. This gave us enough pieces to put together the entire jigsaw of its genetic makeup. 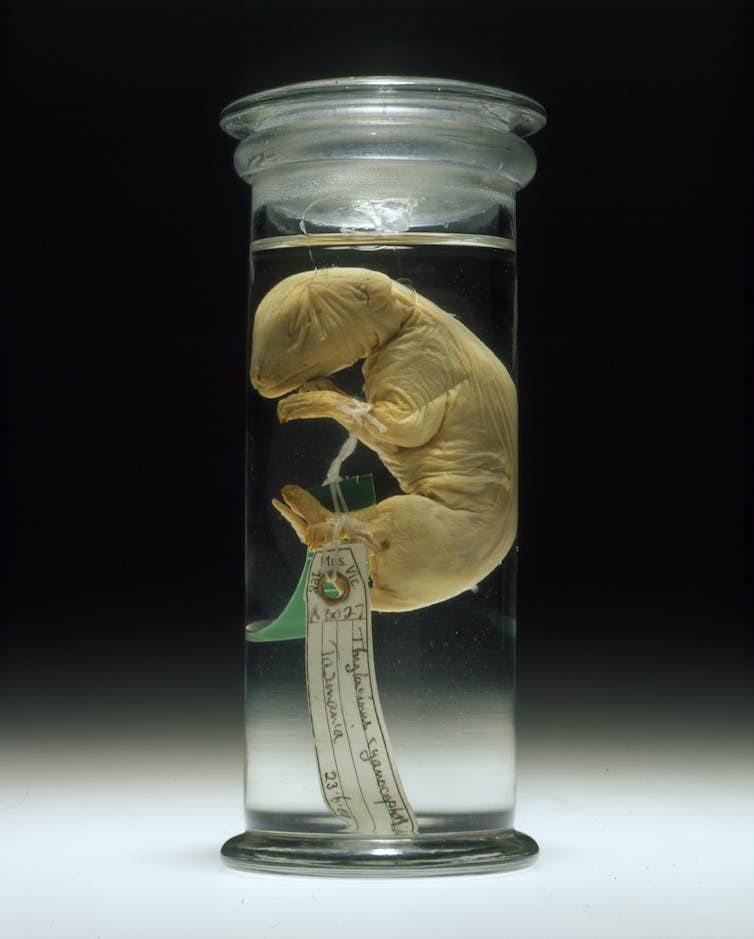 Next, we made a detailed comparison of thylacines and dogs to see just how similar they really are. We used digital imaging to compare the thylacine’s skull shape to many other mammals, and found that the thylacine was indeed very similar to various types of dog (especially the wolf and red fox), and quite different from its closest living marsupial relatives such as the numbat, Tasmanian devil, and kangaroos.

Our results confirmed that thylacines and dogs really are the best example of convergent evolution between two distantly related mammal species ever described.

We next asked whether this similarity in body form is reflected by similarity in the genes. To do this, we compared the DNA sequences of thylacine genes with those of dogs and other animals too.

While we found many similarities between thylacines’ and dogs’ genes, they were not significantly more similar than the same genes from other animals with different body shapes, such as Tasmanian devils and cows.

We therefore concluded that whatever the reason why thylacines and dogs’ skulls are so similarly shaped, it is not because evolution is driving their gene sequences to be the same.

The thylacine genome also allowed us to deduce its precise position in the marsupial family tree, which has been a controversial topic.

Our analyses showed that the thylacine was at the root of a group called the Dasyuromorphia, which also includes the numbat and Tasmanian devil.

By examining the amount of diversity present in the single thylacine genome, we were able to estimate its effective population size during past millennia. This demographic analysis revealed extremely low genetic diversity, suggesting that if we hadn’t hunted them into extinction the population would be in very poor genetic health, just like today’s Tasmanian devils.

The less diversity you have in your genome, the more susceptible you are to disease, which might be why devils have contracted the facial tumour virus, and certainly why it has been so easily spread. The thylacine would have been at a similar risk of contracting devastating diseases. 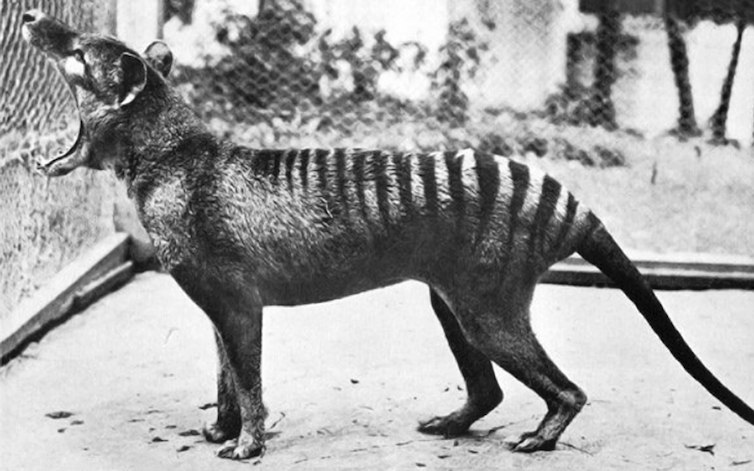 This loss in population diversity was previously thought to have occurred as a population of thylacines (and devils) became isolated on Tasmania some 15,000 years ago, when the land bridge closed between it and the mainland.

But our analysis suggests that the process actually began much earlier – between 70,000 and 120,000 years ago. This suggests that both the devil and thylacine populations already had very poor genetic health long before the land bridge closed.

Read more: How curiosity can save species from extinction

Now that we know the whole genome of the Tasmanian tiger, we know much more about this extinct animal and the unique place it held in Australia’s marsupial family tree. We are expanding our analyses of the genome to determine how it came to look so similar to the dog, and to continue to learn more about the genetics of this unique marsupial apex predator.