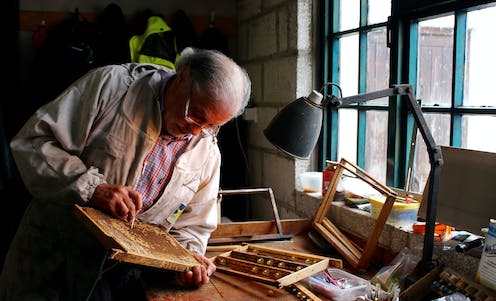 The risk of people past retirement age falling into poverty is now decreasing. There has been a substantial improvement compared to 15 years ago, when the incidence of poverty among the elderly was 32.4%.

People past retirement age are much more at risk of poverty compared to people of other ages. In 2014, 23% of people over 65 were identified as experiencing poverty, while among the general population this was 10.1%.

If we look at poverty in older age using three alternative, well-established, definitions: the Henderson Poverty Line, the OECD 50% poverty line and the OECD 60% poverty line, they all lead to very similar conclusions.

Read more: How we could make the retirement system more sustainable

Applying this to data from the Household, Income and Labour Dynamics Australia (HILDA) survey shows clear differences between ages. There’s a much larger incidence of poverty among people over 65, as well as a larger decrease in the poverty rate among those over 65.

Between 2000 and 2014, the prevalence of income poverty among older people declined by more than 9 percentage points, well above the decline of other age groups.

These two reasons combined account for over 75% of the decrease in poverty incidence. Increased private pensions account for a further large part of the decrease (nearly 41%), while changes in investment income would have increased the poverty rate.

This shows just how important public and private pensions are for the standard of living of older people. Given that more and more people will be covered by superannuation, we expect that poverty rates will further decline in the future. However, maintaining the value of public pensions is equally important as a substantial proportion of people over 65 will remain dependent on these payments.

Read more: How can we prevent financial abuse of the elderly?

Those dependent on the age pension include people with a disability during their working life, and many women, as they remain the ones who are more frequently out of the labour force and working part time to raise children. As a result, these groups have less opportunity to build up sufficient superannuation. However, the age pension may perhaps be better targeted.

The increase in payments for people who aren’t poor and over 65 is nearly as large as the increase for those classified as poor who are aged 15 to 64. Payments for working-age people have only been increased with inflation, while pensions increased at the same rate as average earnings which has generally been higher than inflation.

To better alleviate poverty for our whole population, government payments for working-age people need to keep up with average earnings like the pensions do. If the government is not prepared to direct more resources to income support payments, they need to treat different age groups more equally. This means better targeting payments among our older population and using any savings to increase payments for the working-age population at a similar rate as pensions.