Today’s release of the 2017 NAPLAN National Report confirms preliminary findings released in August and offers deeper insights into achievement trends since the assessment program began a decade ago.

The results paint an overall portrait of plateauing student achievement in literacy and numeracy, mixed with pockets of improvement and persistent inequalities between young people from different backgrounds.

High level trends over the past decade

Nationally, NAPLAN results have flat-lined in most areas since testing was first conducted in 2008. There are no statistically significant differences in achievement across the majority of domains and year levels.

Read more: NAPLAN is ten years old – so how is the nation faring? 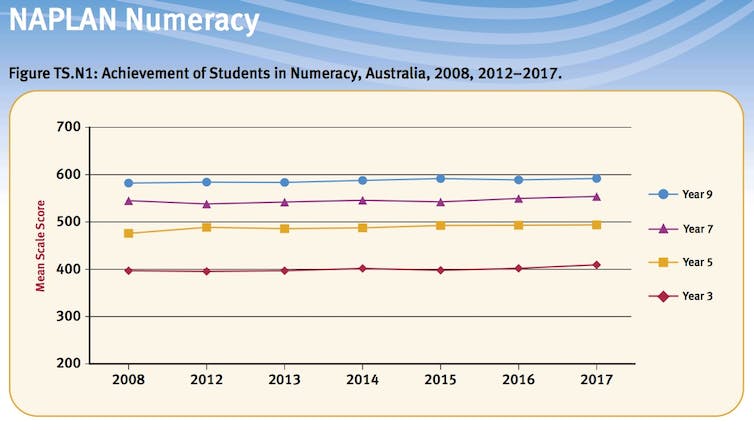 Year seven writing is the only area to show a statistically significant decline. It remains a major area of concern.

State and territory comparisons reveal good news for Queensland and Western Australia. Both show improvements across a number of domains and year levels.

The Northern Territory continues to lag significantly behind the rest of the nation across all domains and year levels.

The vast majority of young people meet the National Minimum Standards (NMS). NMS provide a measure of how many students are performing above or below the minimum expected level for their age across the domains.

NMS percentages are over 90% for the majority of domains and year levels. But NMS percentages vary widely. For example, only 55.7% of students in the Northern Territory meet the NMS for year seven writing, compared to 90.8% in Victoria.

This year’s results show clear patterns of achievement between young people from different backgrounds. In many cases, these differences reflect broader inequalities in Australian society. 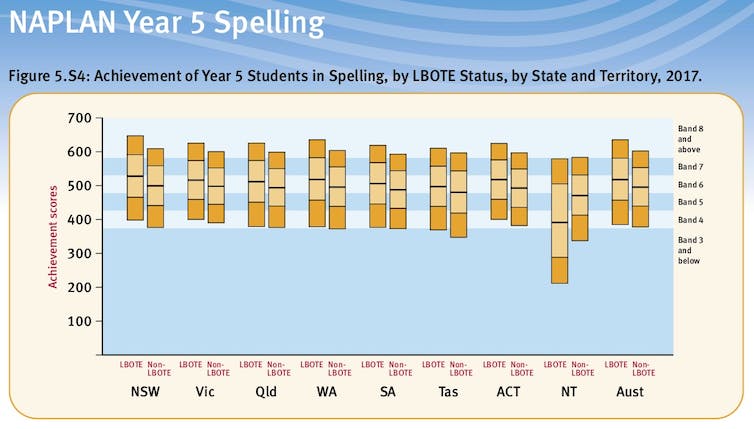 Year 5 spelling: students with a language background other than English (LBOTE) compared to non-LBOTE students. ACARA 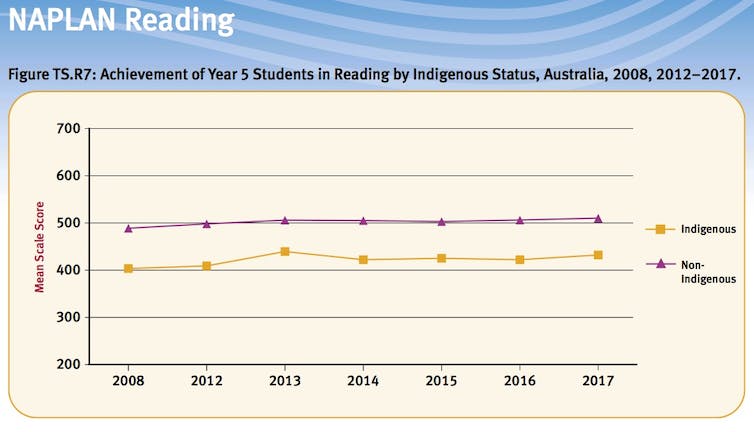 As always, tread cautiously with data

NAPLAN is one useful measure of student achievement in Australian schooling.

When interpreted carefully, it can help policy makers, researchers, school leaders, teachers, students and parents better understand and debate literacy and numeracy achievements. It also serves to highlight pockets of underachievement and disadvantage, and can play an important role informing policy interventions and investments.

But NAPLAN is not an oracle and can only tell us so much. So we should treat these results carefully.

To get a more accurate picture of achievement trends, we need to take a number of indicators into consideration. This should go beyond the basics of literacy and numeracy, including achievements in ATAR subjects, year 12 attainment rates, and more.

NAPLAN results should also be considered in relation to other standardised assessments, which do not always tell the same story.

It’s also important to analyse school and student level NAPLAN data, which will be released in March 2018. It will no doubt lead to another round of debates about the role of NAPLAN in our schools.