If you were to look in your kitchen or bathroom cabinet, the chances are you’d find some unused medicine.

Maybe you recovered from surgery more quickly than you expected, and didn’t take all the strong painkillers your doctor prescribed. Or perhaps you took a medicine so long ago that it’s expired, the cardboard packaging is disintegrating, and you can’t be certain what it was for in the first place.

But stockpiling medicines at home can be risky, not just for you but for your family and pets. And disposing of them in the garbage or down the toilet carries risks too.

Our new research, published in the Australian Health Review, shows that both practices are common. And few people know how to safely dispose of unwanted or expired medicines.

How big is the problem?

Pharmacists dispensed 208 million government-subsidised prescriptions in the 2015-16 financial year. And in a 2015 national survey, eight out of ten adults said they had used at least one non-prescription medicine in the previous month.

Our research showed that almost two out of three people (60%) surveyed said they had unwanted medicines at home, and one-third (33%) of these medicines had expired.

Medicine can be unused or left over for a number of reasons. Perhaps we decide not to take what our doctor prescribed, or we feel better so we think we no longer need it, or the doctor changes our medicine and prescribes something else.

Read more: We know why bacteria become resistant to antibiotics, but how does this actually happen?

Stockpiling medicines at home can also be a safety problem. Children or pets can accidentally eat or drink them, older people can become confused about which ones to take, and medicines can lose their effectiveness or become toxic after their expiry date.

Then there are security issues such as theft. This is particularly relevant for opioid medicines (strong pain relievers like codeine) prescribed after surgery, which can be sold on the black market.

One recent US study found that most opioids prescribed after surgery were unused, and not stored or disposed of safely.

A nation of hoarders

To find out what people do with their unused medicines, we surveyed more than 4,300 Australians.

Most people (75%) said they kept medicines in case they needed them in the future. Other reasons included not wanting to waste money, not knowing how to dispose of them, intending to give them to family and friends, or forgetting the medicines were there. 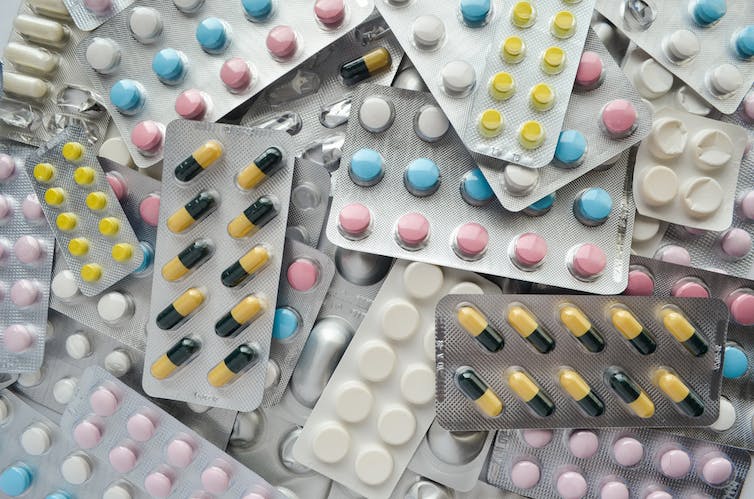 People often save their unused medicines because they think they might need them again, or don’t know how to dispose of them. from www.shutterstock.com

People reported commonly storing their medicines in kitchens, bedrooms and/or bathrooms. When the same medicines are stored in multiple locations, people could accidentally take higher doses than recommended. This is because multiple brands of the same medicine can lead to confusion and the risk of duplicating a dose.

Many people were surprised at how many of their medicines were expired and some reported using expired medicines. This can delay treatment if they are less effective, and sterile treatments such as eye drops could be harmful if they have become contaminated.

When people said they had previously disposed of unwanted medicines, the most common reasons for this were that medicines had expired, were no longer needed, or treatment had changed.

In the garbage and down the toilet

In the 12 months to 2012, the Australian Bureau of Statistics estimated that more than one million Australian households discarded unwanted medicines with their usual garbage.

Either of these disposal methods can cause problems. For instance, there is the risk of identity theft from personal information on medicine labels disposed of in the garbage.

Then there are potential risks from medications that end up in surface and drinking water. This is because sewerage systems are not equipped to remove medicines and their metabolites (by-products) effectively. So these can be discharged into waterways and subsequently into drinking water supplies. Medicines disposed in the garbage end up in landfill and may leach out more slowly into water systems.

Once in waterways, medicines and their metabolites can affect plant, marine and animal life. For instance, hormone-containing medicines can have feminising effects on fish near wastewater treatment works, and antibiotic-resistant bacteria have been found in waste water, surface water and drinking water.

Antibiotics in surface and groundwater have also been found to put algae, daphnids (small crustaceans) and fish at risk.

Medications in our drinking water can potentially affect humans too, but this requires further research.

How to dispose of medicines safely

In 1998, the Australian government introduced the Return Unwanted Medicines Project as a free scheme and now encourage people to:

Last year the scheme collected and safely disposed of more than 700 tonnes of medicines, preventing them from ending up in waterways or landfill. About one in five (22%) people in our survey said they had returned unwanted medicines to a pharmacy. 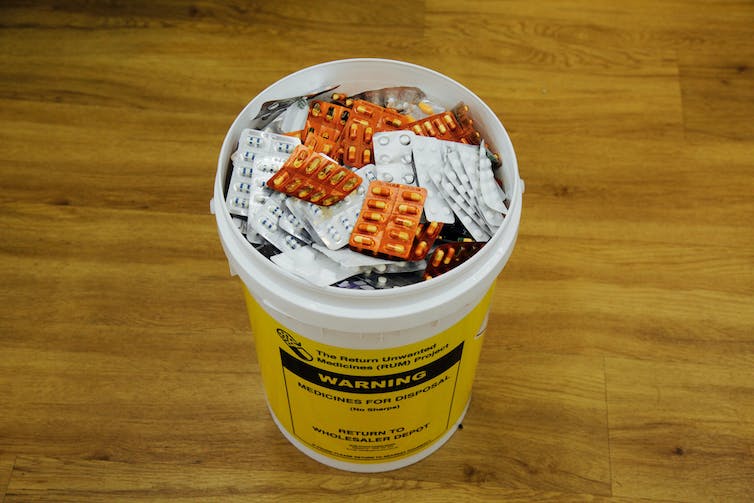 Full to the brim. This is how pharmacists collect your unwanted medicines, part of a national scheme few have heard of.

Once you hand in your unused or expired medicines, pharmacy staff put them in special bins. The bins are then transported to one of three national incineration sites where they are disposed of by high-temperature incineration.

Yet, our study found more than 80% of people hadn’t heard of the scheme; this was for both consumers and health-care workers. However once they knew about it, 92% said they would use it.

All health professionals, not just pharmacists, can remind people to return their unwanted medicines so they can be disposed of safely.

We all have a role to play to minimise the risks associated with unwanted medicines.