Compared to women, men are more aggressive and enjoy being promiscuous.

These are just two examples of the sorts of statements that are linked to research findings from evolutionary psychologists.

If such conclusions are accurate, it raises concerns that our biology might prevent us from progressing towards gender equality. But I argue this is not the case, and that we need to understand our evolutionary history in order to overcome gender inequality.

Read more: Can a four year old be sexist?

What is evolutionary psychology?

Research shows that females and males – including girls and boys, as well as women and men – have many psychological differences. The field of evolutionary psychology attempts to explain these differences in terms of biological adaptations. In essence, this means examining the differing reproductive challenges faced by the sexes throughout our species’ history, and linking these with psychological and behavioural characteristics.

For instance, evolutionary psychologists claim that males are more aggressive than females because they can gain greater access to females by competing violently with other males. Males are thought to be more willing to engage in casual sex because they can greatly increase their reproductive output by doing so, whereas females benefit more from being choosy due to the demands of pregnancy and breastfeeding.

It is quite possible that psychological, behavioural, and physical sex differences make men more likely to dominate women, and women less likely to resist domination from men.

Sex differences are, of course, a matter of degree rather than kind. For example: yes, more men than women are tall, but that’s not to say that women can’t be tall, and men can’t be short. It’s just that when calculated as an average, men are taller and women are shorter. The same principle applies to the differences described above.

Many people reject explanations for sex differences based on evolutionary biology, preferring to attribute such differences to culture and social context.

However, we find evidence of such sex differences all over the world. Furthermore, explaining something as “just culture” doesn’t explain why a given cultural norm exists in the first place. It also fails to explain why we find sex differences in behaviour in many non-human animals.

Read more: It’s not just women at the top who are paid less than men

There is no reason to think that the ape Homo sapiens is a special case, where everything can be explained by culture and nothing by biology. Finally, twin studies suggest that a large degree of individual differences can be explained by genetics – and not solely by the circumstances in which you are raised, and live.

The rejection of evolutionary explanations for sex differences may often be an emotional response: people feel hostile toward these ideas because the picture they paint of human nature isn’t a pretty one. But the fact that something is unappealing doesn’t make it false. Some feminists might worry that such explanations imply that if gender inequality is natural then it is inevitable, and perhaps even justifiable.

Regardless of whether you find evolutionary explanations of sex differences convincing, is there reason to be concerned that they might be true? Does a biological basis for sex differences imply that gender inequality is “determined” by our biology?

If you accept the evolutionary explanation for these sex differences, then you might be inclined to conclude that gender inequality has a biological basis. If this is your view, then perhaps you could accept that male domination of females is in some sense “natural” for humans, as it is for many other species, including our closest living relatives.

But just because male domination may be in some sense natural for our species does not make it necessary. This is a classic case of the “is-ought” fallacy — the false conclusion that what is obligatory and even “right” is determined by what is natural.

Evolution is a mindless process that does not obey principles of morality. The “survival of the fittest” simply describes the process of getting genes successfully into the gene pool. It operates regardless of what is right or wrong, or what makes us happy. The fact that something might be human nature doesn’t mean it is good, and in many cases, it is clearly the contrary. 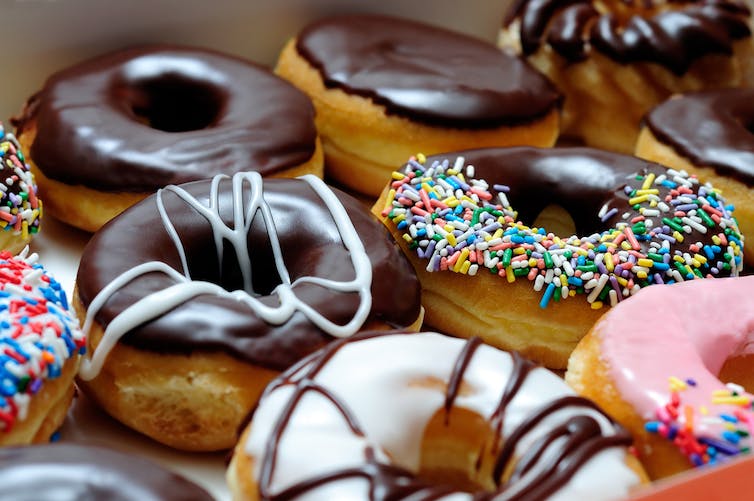 Sugar and fat taste so good - but that doesn’t make it ‘right’ to eat them. from www.shutterstock.com

It is a mistake to assume that an evolutionary explanation of gender inequality is bad news for feminism. Explaining human behaviour does not equate to justifying it or defending it. But if we want to change our society for the better, we probably need an accurate understanding of human nature.

Importantly, evolutionary explanations do not imply that human behaviour is “determined” by our genes, and therefore inflexible. Evolution has given us a preference for foods that are high in sugar, which were rare in the environments in which our species evolved. But this doesn’t mean we can’t exercise self-control and avoid those foods in the modern environments where they are in ready supply. Our desires for such foods are also flexible; the extent to which we crave them depends on how much of them we are accustomed to consuming.

We could approach gender inequality in much the same frame of mind. Perhaps our evolutionary past inclines males to dominate females, and females to be deferential to males. But recognising our history as the source of these gender differences is not to accept them as our future. We are not mindless automata, doomed to slavishly oblige our instincts and impulses.

Many societies have made progress toward gender equality, despite having to work hard to achieve it. If we want to continue that progress, we must understand the origins of the inequality we wish to fight. It’s much harder to change our behaviour if we are not aware of why we do it. This idea was perhaps expressed best by the evolutionary psychologist Robert Wright, in his book The Moral Animal:

Understanding the often unconscious nature of genetic control is the first step towards understanding that – in many realms, not just sex – we’re all puppets, and our best hope for even partial liberation is to try to decipher the logic of the puppeteer…

I don’t think I’m spoiling the end of the movie by noting here that the puppeteer seems to have exactly zero regard for the happiness of the puppets.

Our quest towards progress and justice in all areas, including gender equality, requires awareness and understanding of the forces that have made us who we are.