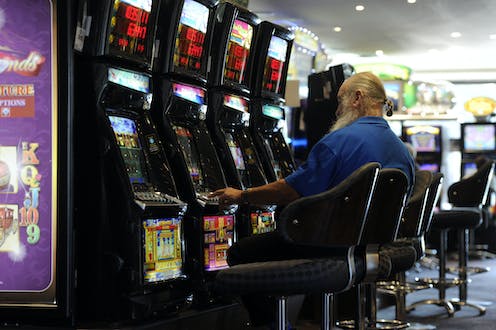 Debate over poker machines is at the centre of the lead-up to this year’s Tasmanian state election. Labor’s promise to remove pokies from Tasmania’s pubs and clubs by 2023 if it wins government has been met with both praise and fierce criticism from lobby groups.

Unlike Labor, we believe that Tasmanians should be able to choose how to spend their money, not be dictated to by the government.

Amid claim and counter-claim, what are the facts on pokies in Tasmania? And what do we know about the impact of Labor’s policy of removing the machines from pubs and clubs?

Ownership and location of pokies in Tasmanian pubs and clubs

Like most jurisdictions that have pokies in clubs and pubs, Tasmania’s are concentrated in areas of social stress. In fact, disadvantage predicts the extent of pokie losses far more in Tasmania than in other Australian states and territories.

This may be largely attributable to the ownership arrangements in Tasmania, where one company – the Federal Group, owned by the Farrell family – holds the licence for all pokies in pubs and clubs, and the state’s two casinos. Ownership of the licences means Federal has excellent data, and can decide where to locate pokies to maximise profit.

Six of these 17 venues are in Glenorchy, a hotspot for pokie gambling. Pokies in Glenorchy make 1.6 times the state average – $74,589 per machine, compared to $46,486 across pubs and clubs in Tasmania. No other local government area even comes close to that figure. These losses translate to $560 per adult per year, compared to a Tasmanian average of $272.

Glenorchy and some other local government areas have previously been described as “low income”, and are reported as having a problem gambling rate of 1.1%, compared to the state average of 0.6%. It’s little wonder, then, that the rate of losses is also more than twice the state average.

Further reading: How one family used pokies and politics to extract a fortune from Tasmanians

It’s no accident that pokies in Tasmania are located in areas of significant social and economic stress. People who get hooked on them are likely to be seeking relief from life’s stresses – whether that’s caused by poverty, social exclusion, or difficult personal circumstances.

How widespread is harm from gambling in Tasmania?

The most recent published survey of gambling activity in Tasmania reports that 0.6% of the state’s adult population can be classified as “problem gamblers”. Another 1.4% were classed as “moderate-risk” gamblers, the next-lowest category.

All these people not only experience some degree of harm from gambling, but their gambling also affects others. Moderate-risk gamblers on average affect three other people, while the gambling of those in the more severe category affects six others.

We can use these data to develop some sense of how widespread the harm from gambling is in Tasmania.

Tasmania’s adult population is estimated to be around 405,000. Applying data from the gambling survey, Tasmania has around 2,430 problem gamblers, each of whom affects another six people (children, spouses, employers, friends and neighbours). That’s around 14,580 other people.

There’s 5,670 moderate-risk gamblers, each affecting three other people: roughly another 17,010 people. Low-risk gamblers comprise 4.8% of the adult population – around 19,440 people – and each of these will affect one other. And the harms of gambling are significant.

All up, those harmed by gambling in Tasmania at any one time amounts to more than 78,000 people, or more than 15% of the state’s total population. This is almost certainly both an underestimate, and overwhelmingly attributable to pokies – given the vast majority of problem gamblers use pokies, almost entirely in pubs and clubs.

The Tasmanian government received about $31.2 million in 2016-17 from pokies in pubs and clubs. That amounts to 3% of Tasmanian state tax revenue.

However, if pokies were removed from pubs and clubs, the money spent on gambling would not disappear. And it’s likely that revenue would flow to Treasury from other expenditures.

Gambling doesn’t create money from nothing. In fact, money gambled on pokies is frequently diverted from other, often more productive purposes, such as mortgage repayments, rent or other entertainment. Many of these other uses provide at least the same level of economic benefit, while not being associated with harm.

Most of the changes that would result from Labor’s policy would be felt by the minority of pubs whose business model has been built around the steady stream of pokie revenue. This includes some large corporations mentioned earlier.

Of the 343 “general” (or pub) licences, 89 (25.9%) have pokies. Of the 197 licensed clubs, a very modest seven (3.6%) operate pokies. The operators of these establishments would have until 2023 to reorganise their affairs, and would be assisted by a government package to do so.

Pokies are highly addictive for many reasons, but importantly because they’re high impact, almost continuous, and everywhere. If social space is saturated with pokies, they’ll be used. If used, they are likely to addict a significant proportion of those who use them.

Some of those currently hooked on pokies may move to other forms of gambling if pokies are not available, such as those available via the internet. However, when slot machines were similarly phased out in Norway, the result was a decline in gambling expenditure, and in harmful gambling. There was no evidence of other gambling forms substituting for expenditure on slot machines.

Without exposure to the highly intense form of gambling that pokies provide, the strong likelihood is a substantial reduction in harm across a variety of areas. It is also likely to lead to growth in other types of economic activity that don’t create these problems.