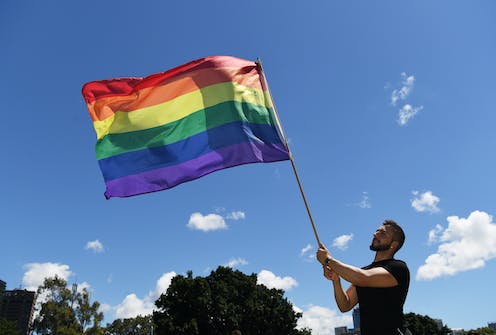 The rise of sexually transmissible diseases made front-page news in The Age, which tried to make sense of the rise among “gay men” and “heterosexual people”.

This illustrates the increasingly common confusion between behaviour and identity. What is involved is sexual contact, or to use the expression common in the early days of the AIDS epidemic, “the exchange of bodily fluids”. Whether people involved have a particular identity, as the words used in the report suggest, is irrelevant.

Desire, behaviour and identity are distinct, and they do not always overlap. Someone who is celibate may also have strong sexual desires or even a particular sexual identity; someone may identify as heterosexual but have homosexual experiences; most people will have sexual desires that are not necessarily acted out in practice.

Freud knew this, even as he constructed elaborate explanations for how our sexual beings are created. Alfred Kinsey shocked Americans 60 years ago when he revealed the extent of homosexual behaviour among men who would have denied any homosexual identity.

Contemporary research – for example, the Australian Study of Health and Relationships – suggests that behaviour, desire and identity overlap in complex ways.

Read more: Australia has finally achieved marriage equality, but there’s a lot more to be done on LGBTI rights

At a recent conference, one speaker declared himself “a proud LGBTI person”. A moment’s reflection suggests this is very unlikely.

Being trans – that is, to question whether one’s biological characteristics determine one’s sense of gender – implies neither heterosexual nor homosexual desires. Indeed, if we accept that gender is fluid, it makes nonsense of a binary division between hetero- and homosexual. This may be why social conservatives feel so threatened by “gender ideology”.

Sexual and gender fluidity are common themes in most cultures, and novels, opera and film are rich in their exploration of this fluidity. As Patrick White wrote in his memoir Flaws in the Glass:

Ambivalence has given me insights into human nature, denied, I believe, to those who are unequivocally male or female.

The recent film Call Me By Your Name tells the story of two young men who have a brief relationship one summer in Italy. Neither identifies as “gay”, and the elder seems largely heterosexual in his subsequent life. Yet some critics complained at the absence of identity politics – one even complained that openly gay men had not played the leading roles – ignoring the basic premise that desire does not equal identity.

The use of the acronym “LGBTI”, sometimes with added letters to indicate “queer”, “asexuals” or “allies”, is a direct product of American identity politics, and one increasingly used in debates about human rights. But there is a far neater alternative language, which is the term “SOGI”: sexual orientation and gender identity, the preferred usage in international human rights discourses.

There are three good reasons to prefer this term.

First, it avoids the neat categorisation of people according to assumptions about fixed identities, allowing for the realities that how people experience sexuality and gender is often messy and changes over a lifetime.

Read more: Michael Kirby: the rainbow in Asia and the fight for gay rights in our region

It is also less linked to liberal Western notions of identity politics, and therefore less likely to be attacked as part of neo-imperial attempts to destroy traditional cultures. This week saw a film festival in Tunisia addressing “issues of gender identity and non-normative sexualities” – a deliberate choice of terminology in a deeply hostile environment.

But perhaps most important, everyone has some sense of their experience of sexuality and gender, and the term serves to remind us that we are not speaking of discrete minorities, rather of the complexities of human experience.

Yes, there are times when particular identities are important. Same-sex marriage was only an issue precisely because lesbian and gay relations lacked full legal and social acceptance without it. People who feel discordance between their bodies and their gender expression need recognition and protection from widespread discrimination.

But there is an equal danger in assuming that everyone will be comfortable with labels that define them through increasingly arcane acronyms. In his recent memoir, the British scholar Jonathan Dollimore wrote:

It’s one of the delusions of identity politics to think that our desire comfortably coexists with our identity, a belief which has more to do with consumerism than desire. I’ve come to feel that sexuality might at different times express different aspects of one’s self, a situation further complicated by the fact that the self changes.

The current Melbourne Midsumma Festival program refers to “LGBTQIA+” in an attempt to incorporate everyone with “diverse gender and sexuality”. But there is a risk of becoming so inclusive that the term loses all meaning. Adding letters to the acronym simply hides the complex interconnections of desire, behaviour and identity in everyday life.